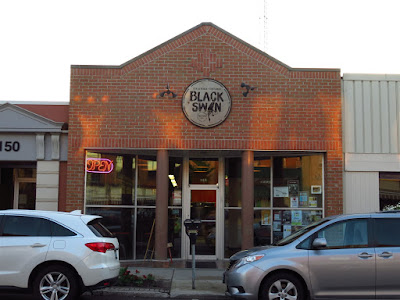 Teena and I usually go to Stratford once or twice a year for the Stratford Festival. This year we discovered a new brewery in town, well, one that is new to us, Black Swan Brewery. The brewery has been around for a couple of years on Downie Street, which we would have to walk past on our way to the train station to go home, so how did we miss it?

It seems the brewery opened after our last visit together to Stratford to see Crazy for You in May 2014. The brewery wasn't up and running then. After that, I did a bus trip by myself later that summer to see Waiting for Godot and last summer went on my own by bus to see Oedipus Rex. Neither time was I south of the Avon Theatre, where the brewery is located.

I'm glad we found it this time! 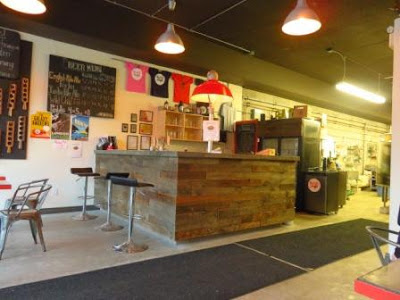 The brewery was opened by two former teachers, Bruce Pepper and Ryan Stokes, both of whom have been long time home brewers. I had a chance to talk with Ryan. Nice fellow. Very personable. Their website says that our beer has - to our delight - quickly developed a strong and passionate local fan base. This seems to be true as we saw it on tap in town and by the amount of people that they knew who were dropping by.

The brewery has a tasting room that is very homey and comfortable. When we walked in, we were warmly greeted by Jamie. The beer on the left is a Raspberry Wild Child (more on that later), which I had, and on the right is a Road Trip which is a light ale that Teena quite enjoyed. 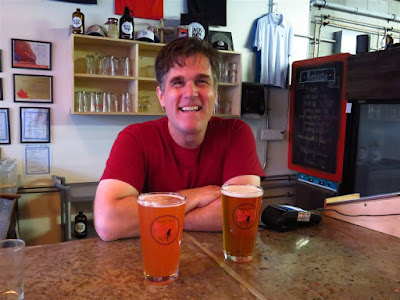 Their beer, as you see, is excellently priced. 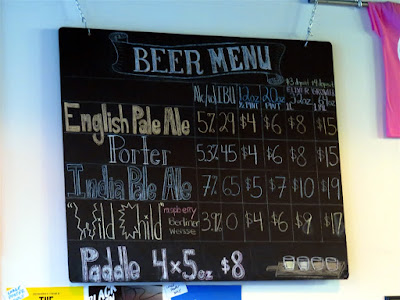 I started with a Raspberry Wild Child, which is a German style sour beer also known as a Berliner Weisse.  This beer comes in at 3.9% apv, which is normal for this style of brew. I had already taken a few sips before Teena took a shot. Glad she did as I forgot. 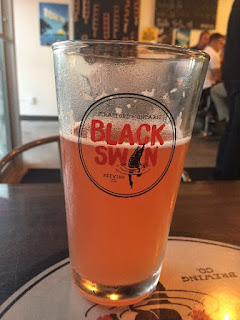 Wild Child pours cloudy with a reddish hue and a white head. There is lots of raspberry in the aroma. I love raspberries, they are so delightfully sweet, but here they come through very sour which I find fabulous. It starts with a sour that makes your cheeks suck in a little, then the sourness backs off a little but is sustained right through the finish. 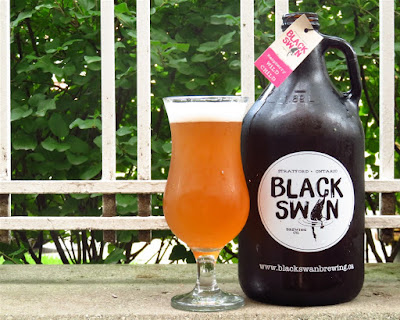 Next up was a pint of their Porter. 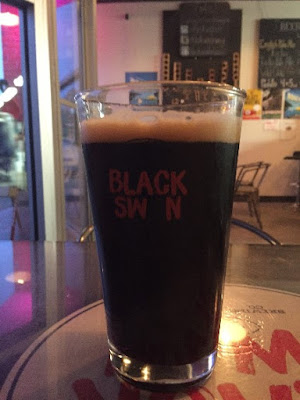 This poured deep brown, almost black in colour with a brownish head. The aroma was full of coffee and chocolate notes. Coffee comes to the front when I first sip before being taken over by a dark chocolate. The coffee slips back in to combine with the chocolate in the finish.

Thus is a very enjoyable porter. I enjoy porters once in awhile but not enough to bring home a growler full. If it was in cans, I would have.

Teena and I had supper in Stratford at Mercer Hall after the play on Saturday. The first beer I had there was an Black Swan English Pale Ale. It was when our server, Myron, said that the brewery was just downtown that brought us to it. 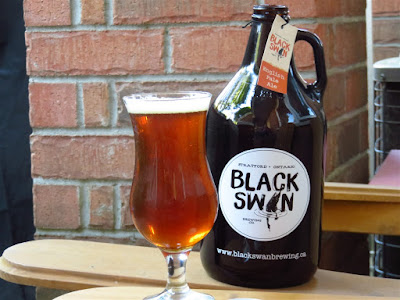 I had a half glass when I was there and brought home a growler to try here, The English Pale Ale pours coppery with an off white head. The aroma is quite malty with a little caramel in it.

This definitely is a malt forward ale. The malt seems to be just a little sweet but halfway through the hops start to make their presence known. It finishes with a very nice restrained bitterness, This is an excellently crafted English Style Pale Ale and on my next trip to Stratford, I will be stopping in to bring home another growler of great brew.