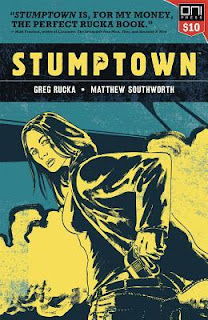 I rarely read graphic novels. In fact I think I've only ever read a couple. Stumptown, however, interested me as I became quickly hooked by the TV show inspired by it. The other day I picked up all four volumes in the series.

Volume#1 is titled,:The Case of the Girl Who Took her Shampoo (But Left her Mini).

Dex is the proprietor of Stumptown Investigations, and a fairly talented P.I. Unfortunately, she's less adept at throwing dice than solving cases. Her recent streak has left her beyond broke—she's into the Confederated Tribes of the Wind Coast for 18 large. But maybe Dex's luck is about to change.

Sue-Lynne, head of the Wind Coast's casino operation, will clear Dex' debt if she can locate Sue-Lynne's missing granddaughter. Is this job Dex's way out of the hole or a shove down one much much deeper?

I thoroughly enjoyed it. The story by Greg Rucka is a fast paced, dark tale, with a flawed but heroic and moral main character, Dex Perios.

Here's the way she describes herself to another in the story: I gamble, I drink, I smoke, I've got a car that runs half the time. I just took out a second mortgage, half my bills are past due ... I own three pairs of shoes, one dress that I'm not ashamed to be seen in, two pairs of jeans and a collection of t-shirts that say more about my adolescence than I car to remember ... My word is all I have.

How's that for a tragic hero?

The plot is well complimented by the art work of Mathew Southworth. The gritty story is aided by each panel illustrating the gloom and dinginess of the setting.

As a bonus, there is a second short Dex Perois story at the end. I loved both.

I'm looking forward to diving into the next volume in the series
Posted by Swordsman at 11:55