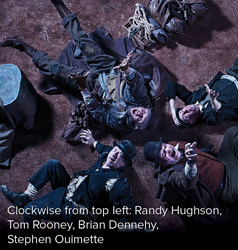 I have heard many things about the Samuel Beckett play Waiting for Godot and have always wanted to see it but never have had the opportunity.

When I heard that it was going to be playing at the Stratford Festival this summer, I knew I now had my chance.

Teena did not want to come. She read what it was about and said that it was not her type of play so I went alone. The Stratford Festival now has a bus that leaves from downtown Toronto, gets you to the theater two hours before the show, and then picks you up to come back a half hour after the show is over plus it only costs $20!

Now I had an easy, cheap way to get down and back!

“What are we doing here, that is the question,” says Vladimir as he and Estragon await their rendezvous with the mysterious Godot. The question takes on a cosmic significance as the two hapless tramps struggle to make sense of their predicament, abandoned in a universe of comic absurdity shot through with moments of nameless terror.

It took part of the first act to get me into the play but after that I enjoyed it. Brian Dennehy shows what kind of actor he is by taking a supporting role in the play rather than a lead role. The role of Pozzo seemed tailor made for Dennehy who was fabulous as the traveler who with his slave, Lucky, come across Estragon  and Vladimir as they wait for Godot. His performance was great.

The play would not be a success unless the conflict, companionship and the quest of meeting with Godot between Estrogen and Vladimer were performed to perfection, which they were by Stephen Ouimette and Tom Rooney. The bulk of the play were on them and they were great in their roles.

I learned after that when the play was first performed in 1953, the most famous line in the review was that this was a play in where "nothing happens, twice!" Correct assessment but it's the way nothing happens twice.

Waiting for Godot was originally written in French by Beckett but I was very glad to hear that Beckett, originally born in Ireland and taught English in Paris, did the translation himself so nothing now can lost in translation and the words are still those of the playwright.

The Stratford production at the Tom Patterson Theatre is excellent and well worth seeing. 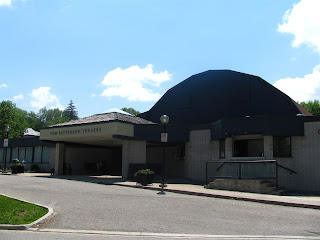