Beer of the Week - The Beers of Six Pints Beer Academy 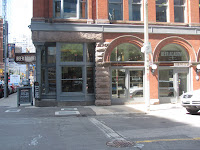 This afternoon I had a meeting at King and Yonge and thought it a great opportunity to wander over to Six Pints Brewing Academy afterwards to try some of their beers. There has been a good buzz about this place since it opened a month ago and I was eager to try it out.

Located at 75 Victoria Ave, it occupies the same building that formally occupied by Dennison's Brewery and Duggan's Brewery. Maybe the third time is the charm! Both former owners tried to use the enormous space as a brewpub. Six Pints is focusing on the beer.

Very literally they are focusing on the beer!

Everyone I spoke to and the conversations between the staff and customers all told me that. Their focus is not to promote a brand but instead to promote beer styles. 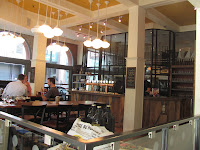 Kyle, the bartender, was very passionate when explaining the flavours of the beers I was having and what kind of food would go with each. There are tasting cards for each beer on tap, so when you order a beer you can pick up its card with the tasting notes. If you do not wish to order a glass, they have "flights" which is smaller samples of 3 beers served with a tasting card for each. Great idea!

Molson is the owner of Six Pints but Kyle told me to think of them as the supportive grandfather. Molson bought Creemore Springs back in 2005, and basically left them alone to continue brewing beer they way the wanted to and to run the operation the way they saw fit. Creemore then bought Granville Island from Peller Estates which allowed for better distribution of both products east and west. I had a Granville Island Pale Ale the other day at a pub and it was just as nice as I remembered it. 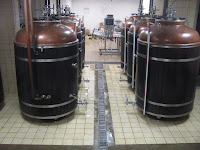 I was told to think of Creemore as the parents. So what is Six Pints? They are the teenager, set off to do its own thing.

I had a chance to talk to Aaron who, as his business card says, is "Beer Lover and Director of National Marketing about Six Pints". When asked, he told me that Molson and Creemore are being completely handsoff with the operation. One benefit to Six Pints is that they can source the raw products cheaper from their parent operations but beyond that, the type of beer brewed, sold, when and for how much is entirely the decision of Six Pints.

The tasting room is nice and takes up about a quarter of the area of the old Duggan's. There are communal tables throughout and a couple had pulled their seats up to the bar. The bartenders are friendly, eager to serve, and know their beer well. Kyle is a cheese lover, like me, and told me of many pairings he would do with the beers I had. 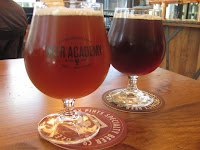 I had three in the tasting room and brought 3 IPA home. The IPA is very popular and was sold out, except for the bottles, and they only had a few of them left. More will be ready for the taps in 4 days.

First off I started with the Dunkle Weiss.  It poured light brown in colour with very little head which was off-white. There is a heavy banana aroma to this typical of a true Weiss beer. Generally I enjoy Weiss beers which have some fruit added during the brew instead of a true Weiss. Just not a big banana fan. Due to the brownish colour, I was surprised at how light it was in mouthfeel. There were hints of banana in the beer and I felt a hint of citrus too. The finish resided at the back of my mouth by my throat and here is where I wish I had a handle on describing flavours. I found the finishing pleasing with a tingle or maybe tartness by my throat which seemed to cleans my palate for the next sip.

A very nice beer which I would have again.

Next up was the Belgium Brown. Kyle said he enjoyed it more after it had sat and warmed up for 15 minutes.  So taking his advice, I ordered one the same time I did the Dunkle. If it was blistering hot today as it has been the past week, I would have wanted it cold but am glad I let it sit and warm.

There is a nice aroma to this and I sensed different spices. It poured dark brown again with very little head. As I sipped, I noticed how the tastes are "layered" and again the lightness of the mouthfeel. I thought it would be a heavier like a typical brown beer. There are many enjoyable flavours coming through as I sipped but the overall flavour was not overpowering and would have been lost if it had been served up cold. 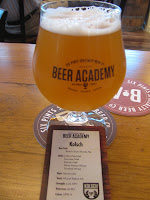 Another beer I would have again but would rather have in the autumn or winter.

The last beer I tried while I was a Kolsch. I know this should have been my second beer but it was not on tap. Kyle came over while I was having the brown to let me know they just brought some up. Beer from a freshly tapped keg. I am so there!

It poured a yellowy colour with a slight orange tinge. I need to work on my colours as much as describing taste! There was lots of carbonation in this and the beer has a nice white head, although I did not find much aroma to this.

There is a slight, very enjoyable sourness to this and a slight citrus flavour. At one time I thought I didn't like Kolsch style beers but if the last couple I have tried made me rethink that, this Kolsch has convinced me that this is a very tasty and enjoyable style beer.

I liked it enough to bring some home! 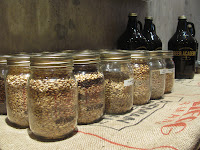 And the IPA that I brought home? I think that that is a post for another day. Time to relax.

I enjoyed my visit to Six Pints and am glad they are only a about a 15 minute walk from work. That means it's a place easy for me to return to. They have a great idea, enjoyable beers, great atmosphere and an excited staff.

I think they'll do well.