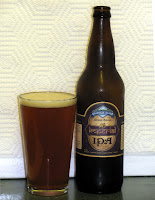 Great craft brew history happened on the west coast in B.C. back in the 80s.

Back in 2005, Teena and I went out west and visited Whistler and Vancouver. While we were exploring Vancouver, of course, we stopped into Granville Island Brewery. I scanned the picture from our album and of our visit which is on the right.

I ordered a 4 beer sampler. The beer was set on an indicated area of the place mat, to be sampled in a particular order and each spot on the place mat had a description of the beer being sampled.

The brewery operated as an independent until 2005 when it was bought by Andre's Wines. Andre's renamed itself later as Andrew Peller. 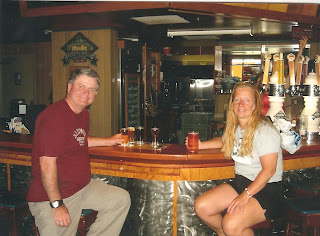 In 2006, they won 6 medals at the world beer championships.

Then in October of 2009, it was announced that Andrew Peller was selling Granville Island to Creemore Brewery, which is owned by giant Molson Coors.

Molson Coors bought beloved Creemore Brewery back in 2005. The beer world was ready for Creemore products to go downhill. Instead, Molson left Creemore untouched and allowed it to run its operation as it saw fit. Their beer still remains excellent.

So what is the situation with Granville Island?

A fellow on the BarTowel Discussion board said he knew some people who worked for Granville and "that the big brewery has been very supportive of them. While the main brands are now all made at the parent brewing facility, all the GI seasonals are made at the island brewpub. Beyond marketing and distri

bution advice and assistance, not once have the corporate overlords told them what to brew or how to brew it."

Molson/Coors unveiled Six Pints Specialty Beer Co. this past Monday to launch its regional Creemore Springs and Granville Island craft beers nationally. Six Pints will distribute Creemore (found in Ontario, Alberta and Quebec) and Granville (British Columbia and Alberta) across the country. The first step will be to launch B.C.-based Granville beer into Ontario within the next few weeks.

It's happy to note that I am trying a seasonal made in very limited quantities from the island brewpub.

The company describes this beer as "Combining local and English malts with Pacific Northwest hops and special yeast, our Imperial IPA is complemented by a unique citrus-peel bitterness that’s excellent for toasting Vancouver’s 125th birthday this year. Cheers, Vancouver!"

It pours brown in colour with a short head. I did pour aggressively but still only a small head appeared. There are lots of lacings that do remain on the glass.

At 8.2%, it is considered a strong beer, called an Imperial IPA, and from the west coast, I am expecting a full flavoured, hoppy bitter beer. I am pleased that right away I can notice the hops in the fragrance.

Yes! I am pleased. The hops are there to start and proceed to get stronger right through to the finish and the finish is long.

This is a fabulous, west coast-styled IPA, the kind I really enjoy. It is only out in limited release, though, so if you love an Imperial or West Coast IPA and can get hold of this, I recommend you do so.
Posted by Swordsman at 14:05