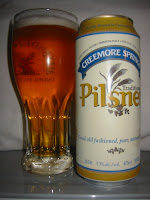 Made in: Ontario, Canada
By: Creemore Springs Brewery

LCBO tasting note "Bright golden yellow in colour with pronounced aromas of hops and banana peel. Dry and malty on the attack, it evolves into a hoppy mid-palate and lightly bitter on the aftertaste."

I enjoy beer with a bite and have a fondness for IPAs and Pilsners. Usually at the LCBO or The Beer Store, I can find Creemore Premium Lager which they are most famous for and was surprised when I found they also brewed a Pilsner, Creemore Springs Traditional Pilsner.

The brewery in Creemore, Ontario, about 120 km northwest of Toronto, was started in 1987 by John Wiggins, a retired advertising consultant and water colour artist. The brewery employees about 50 employees and operates out of a renovated heritage building in town which at one time served as an art gallery. 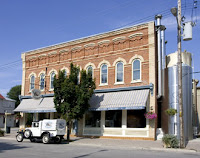 “Proudly a hundred years behind the times” is their slogan which fits with operating out of a 100-year-old building and using the fire-brewed method of a century before.

For 10 years, they only brewed Creemore Premium Lager. In 1997, they introduced Creemore UrBock as a seasonal beer. In May 2007, they came out with another seasonal beer, Creemore Springs Traditional Pilsner, which was their take on a Czech Pilsner and uses Czech hops. It is now brewed year round.

In April 2005, the brewery was bought by Molsons Canada, the Canadian division of Molson Coors which had merged in February of that year in a colossal $3.4-billion U.S. deal.

The CEO of Molson Canada, Kevin Boyce, stated in a release, "Molson's intention is for Creemore to continue operating as a distinct organization benefiting from its own people, knowledge, recipes and marketing methods.''

So far, this seems to be true. There is no mention of their products of being owned by Molsons on their website. The Molson website does claim their ownership of Creemore Springs and proudly speaks of its Craft Heritage and that its the small breweries involvement in the community, especially in the arts. 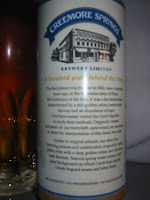 The quality of their lager has not changed and they still brew all their products without preservatives using only malted barley, hops, yeast and spring water which they draw from a spring just outside of town.

Now to the pouring and taste.

This Pilsner is golden amber in colour. It has a very crisp taste with some bitterness attached. The aftertaste lingers with a pleasant bitterness.

This is a beer I would be happy to enjoy again. It could be put into the class of beer that I have heard listed as a "session beer" where one might pour themselves more than one.

Thanks for such kind words. We are glad you enjoyed the beer. Please make sure you stop in and visit us if you are up our way. We would love to show you around the brewery.