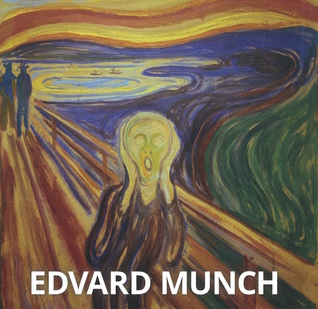 First of all, I have to admit, I'm not much of an art fan. I have, however, always loved Edvard Munch's painting, The Scream. Since I saw it and the Munch exhibit when it came to the Art Gallery of Ontario, a few dozen years ago, I have been interested in the artist and his work. So I finally got around to buying a book, Edvard Munch by German art historian, Hajo Duchting.
Edvard Munch is the most important Scandinavian artist and a pioneer of Expressionism. With him, the existential fear, the loneliness of man, and the unpredictability of his feelings are drawn into art. With a novel and experimental painting technique, Munch demonstrated man's soul-suffering.
Written in short paragraphs which are then translated into five other languages, the book covers different art show where Munch featured his latest works. which To me, it seems that it was in the 1890's where he finally began to create his Expressionist paintings. I love the way his works display the angst of his subjects. Below are a five of my favourites from the book.
My absolute favorite, The Scream, is on the book's cover, shown above, done in 1893. It's interesting to note that when I saw the exhibit, it showed how he also did this in various lithographs. This he did with many of his works.
Here is a self portrait he did in 1895. an oil on canvas, he calls it, "Self Portrait with Cigarette". 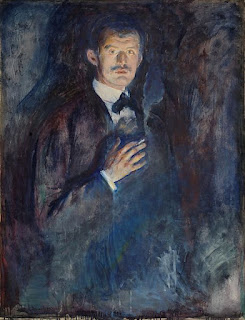 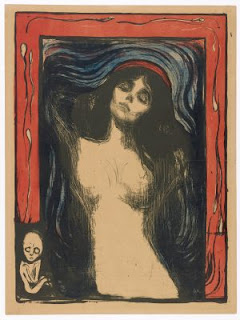 Fear, also known as "Angst", an oil on canvas was done in 1884. This bay or lake must be a local spot for him as it is the same background he used in The Scream, nine years later. He also used it in a few of his other paintings. 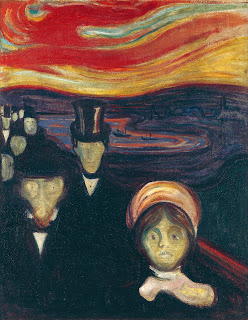 Where much of his work is about death, fear, despair, "The Kiss", a dry point etching, is an excellent depiction of passion between a man and a woman. I read that he never married as he felt as if it would interfere with his work. 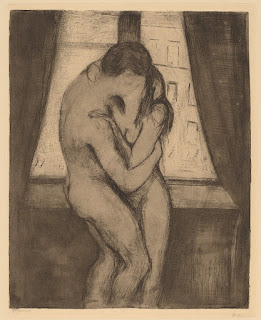 Finally, "Kneeling Female Nude". It's an oil on canvas done in 1919. If not crying, she is definitely feeling despair, fear or loss. I love the emotion shows. 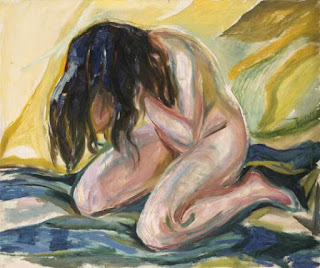 It's my hope that one day, I'll be able to visit the Munch Museum in Oslo, Norway.
Posted by Swordsman at 11:55