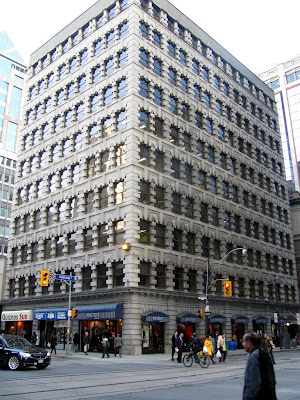 Toronto has many examples of great architecture and some bad.

These days there are many really ugly condos being built in the city. Ugly architecture is not just a feature of the 21st century, however. There are some older examples such as the Lumsden Building sitting on the corner of Yonge and Adelaide. Once it was listed as 6 Adelaide St East but the address has now been changed to 113 Yonge St. 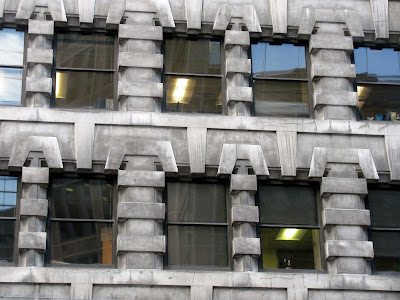 I am not sure what the architect was trying to do. All the windows have the same pattern around them and as a whole it does not work. The pictures do not do it justice. I have always disliked this building.

The main entrance off of Adelaide St east is the only redeeming feature of the building. 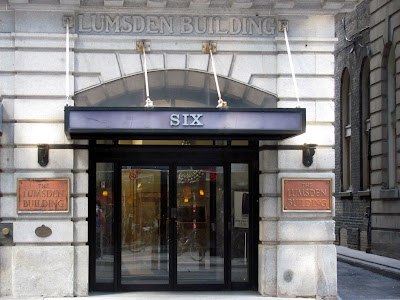 The building was originally named after Charles C. Cumming's wife, using her maiden name. He was the original owner of the building. It was started in 1909 and completed in 1910. I find it interesting that right beside it on the east side is a really gorgeous building, built just a year before. Perhaps J.A. MacKenzie, the architect, was trying to one up it. He failed. Tomorrow I will feature that building.

Finally here is a great older shot of the building. 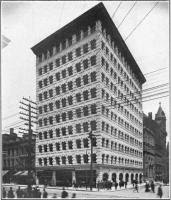 As a casual observer walking from Union to my office each day, I always found this building to be a pleasant anomaly. Sure not pretty, but unique in its style and choice of concrete for the facade. I certainly have wondered what was going through the architect's mind.

I noticed this building for the first time today.
I find it architecturally ugly and interesting.
Maybe in the future it will become Toronto’s ugly duckling.

An advertisement on page 16 (of 1,498 pages!) in the online archived January 1912 edition of “The Electrical News” features a photograph of the Lumsden Building very similar to the last one in this blog post.

Here’s the text that went along with it:

During 1912 we propose to show in our advertisements a series of buildings, grain elevators, ships, factories and other structures in which “Galvaduct” and “Loricated” Conduits have been used for electrical installations. Conduit protection is a recognized necessity in modern building and engineering work.

The longest life under service conditions is assured by the use of the Conduits manufactured by
CONDUITS COMPANY LIMITED, Toronto and Montreal