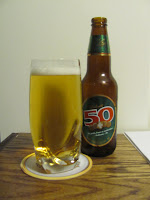 She writes "The Super Bowl calls for a chuggable, all-day, all-night beer that washes down the classics: pizza, wings and nachos. “Fiddy” is your guy—this crisp, pale ale combines a sweet applesauce flavour with a hoppy bite, bringing more heft to the table than a lager would." 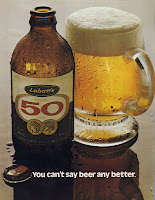 Labatt 50 and I do have a history. My dad was a 50 drinker. When I was in my early teens, he would send me to the kitchen to get him a beer. I remember, like it was yesterday, taking the stubby out of the fridge, cracking the cap and having a whiff of the harsh bitter aroma. Then I would have a sip. It had a delicious bitterness.

I would hand the bottle to my dad, who would hold it up and exclaim, "I'll have to write the company. They're not filling up the bottles as full as they used to." It was a running gag.

My friends were 50 drinkers and remained so for years. I don't have an idea when or why we stopped drinking it and moved on to other brands.

Originally called Labatt 50th Anniversary Ale, to celebrate 50 years of the founder John Labatt grandsons, John S. and Hugh Labatt co-running the company, it made its debut in 1950. 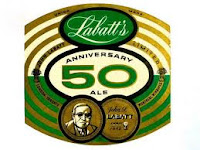 In 1847, 10 years after arriving in London, Ontario, from Ireland, John Kinder Labatt opened brewery with a partner, Samuel Eccles, which they called "Labatt and Eccles". When Eccles retired in 1854, Labatt took over the company calling it London Brewery. Later the name was changed to John Labatt's Brewery, then simply Labatt's Brewery.

In 1995, the company sold out to Interbrew, which through a series of mergers over the next 13 years, is now known as Anheuser-Busch InBev.

Why did its popularity die (except in Quebec where it still enjoys brisk sales)? Hard to say but there is a very interesting and humorous article from the London Free Press from September 9, 2008 ...

Labatt 50's demise, as I see it, was because of two things: light beer and long-necked bottles. Miller Lite was inflicted upon the beer drinking public in 1977 (Great taste! Less filling! My butt!). Molson unleashed the first Canadian light beer -- Molson Lite -- in 1979. To bolster a sagging market, Canadian brewers phased out the iconic stubby beer bottle in favor of the sexier, trendy long-neck. By 1984 the stubby was history and Fifty's reign was over. Blue supplanted Fifty as the nation's brew of choice and we haven't looked back since. Within five years, Fifty was as trendy as a polyester leisure suit and about as popular." 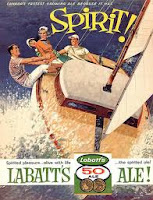 So who better to try a Labatt 50 today and evaluate it? Kevin, Alfred, Craig and I, all 50 drinkers from back in the day. Getting together today for the Superbowl, I am bringing along a few bottles of 50 for judging. I brought bottles not cans, as we always drank from bottles (long neck bottles not the stubby. I miss the stubby!).

After cracking the cap, I immediately took a sniff. I found there was little or no aroma. Then we all did a cheers and had a sip.

The 50 starts off watery with very little flavour but has hop bitterness in the finish. Although not a great beer, it is drinkable. Good thing too as they do not sell six packs of 50 in bottles, only twelves.

Alfred commented that back when we first started drinking it was all about the bitterness. He too found the 50 watery in the beginning with bitterness at the end. He enjoyed the first few sips but once done, the bottle, said he really didn't like it and likely it was because his tastes had changed over the years.

Craig liked it and thought it was nostalgic to be sharing a 50 again.

So would I have another again? I likely would not buy it for my fridge but will have no problem drinking the six that I have left. It may become one of my "go to" beers when I am at a bar with no craft beer on tap.

All in all, it was fun to share a 50 again with my friends while watching the game.

Here is an old 50 commercial from 1972, the year I could legally start buying it.

Classic photo moments of drinking 50. Boy have we changed over the years! 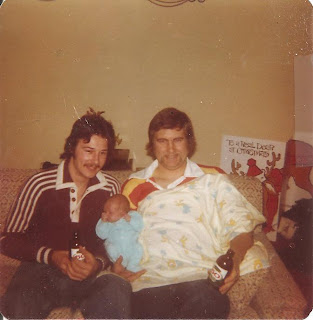 Here I am holding onto my parents dog, Banjo, with my 50 close by. 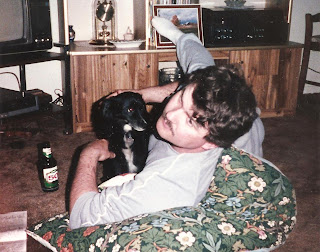 Here we are today. From left to right, me, Alfred, Craig and Kevin. 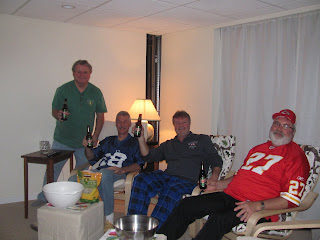 Great blog! Love the old pics! 50 for the 50-something-year olds!

Suggestion - get a world map and "pint-point" :-) all the places you have profiled beer at.

Are there any countries that do not brew beer? You could "grey" those out.

The beer all but disappeared from the shelves in the last 10 years but I still could find it in 710 ml bottles at some Montreal bars.

Labatts recently brought back the old logo on their big cans and I see it more often now in dépanneurs (our corner stores that sell beer. It is also available in 6, 12 and 24 packs.

While not as tasty as a craft beer, it is a decent pick when you are stuck in a place that only sells big name beers.

In fact, it is perhaps the closest in taste to a microbrewed ale offered by the two major canadian breweries.

Worth giving a try, hower, don't set your expectations too high!

Nowadays, new beers are created weekly if not daily.
Remember going to an Ottawa bar in the 70's called Maple Leaf Tavern.
Customers were either drinking quarts of 50 or Canadian.
Does anyone remember how much a pint or quart was back in '77.

It was about a $1 - and 50 is still a great beer and i tasted them all when women sat on one side of the Hotel and men on the other and since then I have tasted most of the nifty craft that presented itself. Balls to the wall for Labatt 50
Bob

When there's no craft beer on tap? Really?
It's obvious there's something wrong with you guys.
I've been drinking 50 for thirty two years because that's the way it should be. Pick a beer and stay with it until you die.
Band wagon beers and craft beers are runing this country.
you guys should be ashamed of your selves.

I agree with the last guy. 50 is a beer that should be drunk by everyone, everywhere, all the time. I've been drinking it for thirty three years and I won't drink anything else. Give me 50 or give me death.

You gotta drink it at room temperature guys!

I'm not Canadian by birth and a woman to boot, but I have to say that one of my favourite Canadian beers is Labatt's 50. I get a few comments when I drink it, people saying it's their grandfathers beer but I don't care. I prefer beer with a bit of flavour over the pretty tasteless lagers (although they have their place on a hot day).

50, red cap or ipa. All we could steal from our parents fridges as teens. I ended up with 50 more than any. Lol

My Dad used to purchase 50 dozen and have them delivered to the house and stacked in layers of three one ten high and the other six high and two dozen would immediately be dispensed into our famous beer fridge set at for perfect chill. Cost was $2.50 plus five percent tax (B.C. price) per dozen 1968.
And yes my job was to fetch a beer and pour it carefully creating no head whenever I saw Dads glass getting down to less than an inch. Lol your article brings back so many memories !!!