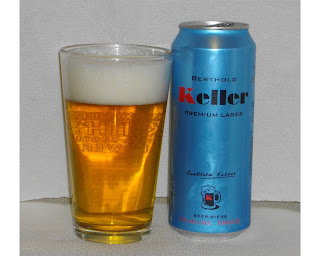 I'm not to sure what to say about this beer. Finding information on the brewer was tough, info on the beer even tougher.

When I first Googled the beer, I found a link for Bethold Keller which only was a one page ad saying "When you name is Berthold "beer" Keller, it seems inevitable that you become a master brewer." Then I went to a free translation site an entered Bethold Keller, which I found translates to "beer cellar".

Already I'm not too impressed. Does Berthold Keller really exist or does he hang out with "The worlds most interesting man"?

This beer is brewed by Brouwerij Martens, in Bocholt, Belgium. It was the Belgium part which drew me to this beer. Belgium a beer person's Nirvana. The company is in its 8th generation of private ownership since it started brewing in 1758. It is the 3rd largest brewer in the country.

Much of this I found on engineering websites, as the brewery have come up with a new style of low cost production. Perhaps that is why I could get a 500ml beer for only $2. 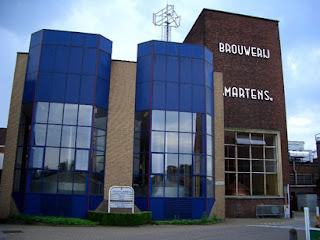 It pours a golden colour, forms a good foamy head with a hop note to the aroma. The head did dissipate fairly quickly. With the slight hoppiness in the aroma, I was expecting a slight bitterness when I sipped. Instead I was surprised by the slight sweetness. There is not much to the finish. No lacings could be found on the glass.

Just like you can't judge a book by it's cover, I have found you can't judge a beer by the country it is made in. Even beer Nirvana has it's so so beers and this is one of them., a mainstream lager with not much to it but would appeal to those who enjoy mainstream style beers. The price is sure right though!
Posted by Swordsman at 19:00

This beer is without any discernable flavour, watery, thin and generally one of the orst beers I have ever tried.

nice blog abt the product. well i had the black colored tin with 9% alcohol in malaysia and i tell you its awesome the moment i took the 1st sip i was impressed with it...very nice smooth and light beer. i say better then other expensive branded beers.

8 cans of 5%abv for £5.50, in the real world you are NOT going to get a master product for this money, you ARE in cheapskate territory..you pays your money and takes your chances.
First impressions - a bit thin on taste and slightly metallic, however clean and crisp, and when cold you could probably knock more back than intended due to it's lightness which hides the strength.
For the money... well worth it!

4 cans for £3.49. I've had it before today but don't remember it being as sweet as this. It must taste terrible at room temperature, but I'm not drinking it slowly enough to find out.

for £7.50 FOR 8 500 ML CANS YOU PAY YOUR MONEY AND TAKE YOUR CHANCE AND TO BE HONEST THIS IS NOT BAD AS SOME OF THE CHEAP BREWS AND NO CHEMICAL FEELING HANGOVER IN THE MORNING THAT A LOT OF LARGER CAN GIVE SO FOR ME ITS A SOLID 8 OUT OF 10

4 cans for £2.99 for 8 for £5, you can't complain. 1st sip I could tell it was a cheap beer, but different from others. It has a sweet taste and quite refreshing. When on a budget, this is the one.

the time-traveller and his dog said...

My local beer shop owner drew my attention to this lager this afternoon. '£1 a can, 6 for a fiver.' I bought two cans. am just finishing the first one and not impressed - I'd rather spend the extra 45p on a bottle of Staropramen.

Never heard of it but the can caught my eye and 95p each.Poured in a glass it looks clean appealing. Goes down easy and doesn't leave a strong aftertaste.Tastes crisp and clean with a slight metallic undertone.Cheap and cheerful- could do a lot worse.

I have bought this beer many times. I too have had a hard time finding info on the brewery etc. Even though I like to research, the most important part is the beer itself. Don't really care even if it was a dude in his parents basement making this beer - the taste is excellent. As a lager, the aftertaste is subtle and not strong - a very smooth beer good for any season.

Although I find this a good fall beer.