Beer of the Week - The Beers of Faxe Brewery 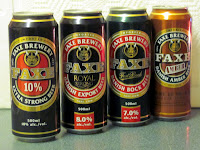 Its cans sitting on the shelves of the walk-in cooler at the beer store boasting their high percentage of alcohol. The Danish Bock with its 7% in bold red, the Danish Export with 8% boldly showing and Faxe Extra Strong with its 10% in big print in the middle of the label. Lots of high powered beer from this brewery.

This brewery is not at all concerned about selling their high alcohol beer in smaller bottles. These cans are all 500 ml cans. In fact, in Germany they well known for its 10%, 1 litre cans! That 1 litre can is like drinking a 6 pack of 5% bottles.

I also picked up their weak sister, a 5% Amber ale.

The original brewery, then called Fakse Dampbryggeri, was started in 1901 in Zealand, Denmark, by Nikoline and Conrad Nielsen. When Conrad died in 1914, Caroline renamed the the business Faxe Bryggeri and carried on the operation. The business at the time made a mild ale and carbonated soft drinks.

In the 1930s,the success of the brewery also created a problem. Zealand is an island in Denmark and the brewery's operation was draining the water supply and creating water shortages. To stay in operation, the company drilled an 80 meter (260 feet) deep well and found limestone filtered water. It has been using it for its beer ever since. 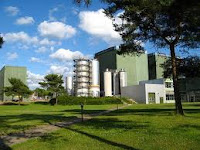 In 1945, Nikoline created a partnership for her three sons and then retired from the brewing business. In 1956, Faxe became a limited business. The next 4 years were hard ones for the family as all three sons passed away in that period. Nikoline's grandson, Bent Bryde-Nielsen, was named the head of Faxe Bryggeri.

In 1989, Faxe Bryggeri merged with Jyske Bryggerier to become the force Royal Unibrew, which is the second largest brewing group behind Carlsberg.

Time to try some beer!

I'm going to start with the weakest and work up. Definitely will be done over a couple of days. 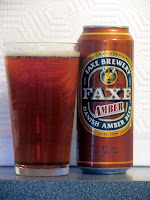 The Faxe Danish Amber pours with a deep amber colour and a white head. The head dissipated quickly and there were no lacings. I see on the can that they use maize in this beer (known in the beer world as an adjunct) which explains lack of lacings. There is a slight floral hop tone in the aroma. The beer is flavourful, starting with with a slight hop bite and a long hop finish. Not an overpowering hoppy beer, but a decent brew. I like it but could not see me buying this one again. 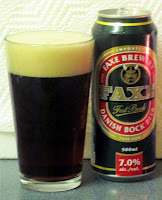 The Danish Bock as mentioned has 7% APV. It pours dark brown in colour with a slightly brownish head. Lots of lacings are left along the insides of the glass. There is a coffee tone in the aroma, perhaps some chocolate too. On taking my first sip, the beer reminds me more of a stout or porter but a little thinner in taste. Don't get me wrong, the taste is enjoyable plus the alcohol taste is well-hidden. I don't sense coffee in the taste as I did in the aroma but bitter chocolate does come through. Like the first one, a decent beer, but not one I would buy again. 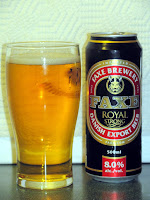 The Royal Strong Danish Export Beer surprised me. Being 8%, I did not expect it to pour as light a colour as it does. It pours a light golden colour with a white head. I could sense alcohol in the aroma along with little hops.

I am unsure if I like this one. It is not a very well-balanced beer. It has hop notes in it but no malt balance. I have had strong beers before with no sense of the alcohol but this has a slight alcohol burn in the taste. There also seems to be very little carbonation after the initial head dissipates, and the glass, which was rinsed well before pouring, has clear sides with lacings not even attempting to form.

The ingredients listed on the side of the can state there is maize (corn) in this as well along with glucose syrup. Barley malt is mentioned second after water but glucose syrup is listed third. No wonder the head dies quickly, there are no lacings or balance to this. 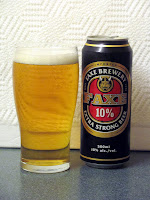 Finally we are up to the heavyweight. The 10% Extra Strong Beer. It too pours golden in colour, a little darker gold than the 8%. Surprisingly there is little aroma. I see that glucose syrup is listed third followed by maize.

This actually is slightly nicer than the 8%. No alcohol burn in this one and some hops in the finish. This one is just an OK beer.

Of the four beers I tried, I like the Bock the best, followed by the Amber. There is not a beer that I tried here that I would be buying again.

I have the FAXE one liter can and mug that came as a gift set. Problem is a few people caught on that I like beer... so I ended up with several beer sets. Either way, it's a great beer. Glad to see you feature it.

Faxe is a very good beer most especially, when it's very chill. I love faxe! I drink faxe!! I sell faxe!!!

Its nice to see this, she was my Danish grandmothers aunt. My grandmother told us of when she used to visit before the war and bring over her home made drinks. From tiny acorns and all that.

beer coming from where

how i can order i want to try