Her Dark Path by Ken Ogilvie 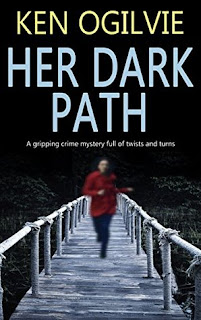 I just finished reading, Her Dark Path, the debut novel from Canadian Author, Ken Ogilvie.
16 years ago, Rebecca Bradley’s mother was murdered. Rebecca was only eight years old. The killer has never been caught. Growing up, Rebecca vowed that one day she would track him down and make him pay.
Now Rebecca is a young police woman in Ontario. She wants to become a homicide detective. Her first investigation is the cold case of a woman who vanished for 16 days and then was found dead in her own home. The brutal crime shocks the remote Canadian town of Conroy.
The puzzling case has uncanny similarities to the murder of Rebecca’s mother. Both victims were found strangled in their own kitchens.
Can Rebecca keep her emotions together as she closes in on a killer with connections to her family and tragic past? And will she finally get justice for her mother?
Her Dark Path is a book I really enjoyed reading. I found Rebecca Bradley to be a fascinating character. She's a broken figure, who prefers to keep people an arms length away from her, but finds she is drawn to some of the people in small town of Conroy. Soon, she discovers she is becoming friends with various local people and comes to trust them as she searches for clues in the murder case she's working on, something which is hard for her to do.
All in all, it's a story well told.
About Ken Ogilvie 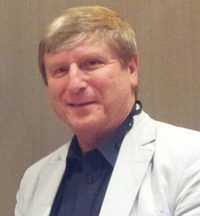 From his website:
Ken has worked in a variety of roles in the environmental field, including holding positions with three governments in Canada (Federal, Manitoba and Ontario) and serving as the Executive Director of Pollution Probe, one of Canada’s longest standing environmental organizations. He remains active as an environmental policy consultant and has served on the Board of Directors of several organizations – most recently the Pembina Institute for Appropriate Development, and QUEST (Quality Urban Energy Systems of Tomorrow). He has been awarded honourary doctorates from the University of Waterloo, Ontario, and Thompson Rivers University, British Columbia.
Ken’s first book, Her Dark Path, was published in September 2017 by Joffe Books, London, England. His second book, Hound, was published by Joffe Books in April 2019. Digital and paperback versions are available on amazon.ca (as well as in several countries, such as the U.S., U.K., and Australia).
Posted by Swordsman at 10:19