Ghost of the Hardy Boys: An Autobiography by Leslie McFarlane 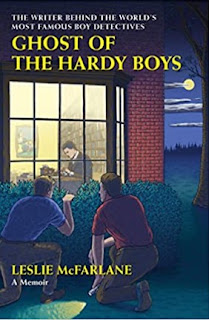 I was a huge fan of "The Hardy Boys" series when I was young and pretty much read every one. It was surprising to find out that the original author, Franklin W. Dixon, did not, in fact, exist. The entire series was written by ghost writers. It was a further surprise was the first 21 were being written by Canadian, Leslie McFarlane, the father of famed Hockey Night in Canada broadcaster, Brian McFarlane.
When I saw that Leslie McFarlane had published an autobiography in 1976, I had to read it.
In 1926, 23-year-old cub newspaper reporter Leslie McFarlane responded to an ad: “Experienced Fiction Writer Wanted to Work from Publisher’s Outlines.” The ad was signed by Edward Stratemeyer, whose syndicate effectively invented mass-market children’s book publishing in America. McFarlane, who had a few published adventure stories to his name, was hired and his first job was to write Dave Fearless Under the Ocean as Roy Rockwood—for a flat fee of $100, no royalties. His pay increased to $125 when Stratemeyer proposed a new series of detective stories for kids involving two high school aged brothers who would solve mysteries. The title of the series was The Hardy Boys. McFarlane’s pseudonym would be Franklin W. Dixon.
McFarlane went on to write twenty-one Hardy Boys adventures. From The Tower Treasure in 1927 to The Phantom Freighter in 1947, into full-fledged classics filled with perilous scrapes, loyal chums, and breakneck races to solve the mystery. McFarlane kept his ghostwriting gig secret until late in life when his son urged him to share the story of being the real Franklin W. Dixon. By the time McFarlane died in 1977, unofficial sales estimates of The Hardy Boys series already topped 50 million copies.
This is a must read for fans of the Hardy Boys and readers who have an interest in northern Ontario mining communities in the 1920s-30s. It's not just about writing the original 21 books of the series but is mostly about life in the 1920s-30s of Sudbury and Cobalt.
McFarlane has an excellent sense of humour and is an entertaining writer. I learned much about life in the north and it was fascinating to have the curtain pulled back, not only on the Hardy Boys, but also Nancy Drew.
It was a fun and interesting read.
Posted by Swordsman at 15:37