Douglas Coupland's Monument to the War of 1812 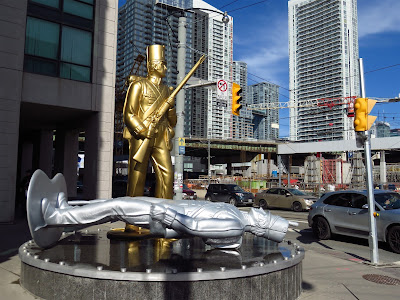 On the northwest corner of Lakeshore Blvd and Bathurst St. stands the Monument to the War of 1812 which was unveiled on November 3, 2008. I have written about it before but had much poorer quality photos. 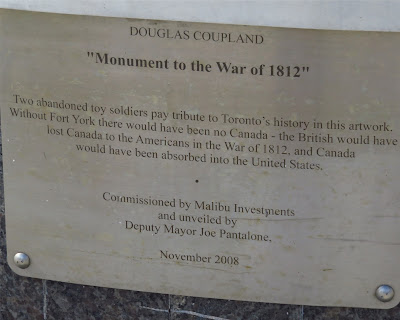 The monument was done by Douglas Coupland, who is not only an artist, but a writer too with many books in publication. I have read a few and think he is brilliant. It was commissioned by condo developer Malibu Investments Inc. I'm glad to see a developer spend some of its money to highlight the history of a neighbourhood and, in this case, a city and a country.

Just north of the monument a major battle was fought on April 27, 1813, when between 1,600 to 1,800 American soldiers invaded Toronto (then York) in an amphibious attack. The attack is explained in detail in a chapter of my book, Defending the Inland Shores, available at Amazon and Indigo.

In an interview, Coupland said this of his work, "I wanted to create something that was just a quick haiku moment for people driving by or walking by to think about the War of 1812," said Coupland. "But once I began getting involved in the project and doing research, I began noticing that the Americans are now starting to change history and they're saying, 'Well actually we won that,' or, 'Actually, we didn't lose' or whatever.

"So it's a war monument but it's also an incitement for people to remember what's going on in the present as well as the past."

The standing soldier is gold and represents a soldier from the 1813 Royal Newfoundland Regiment, who fought valiantly in the attack. The other is painted silver and is an American soldier from the 16th U.S. Infantry Regiment. 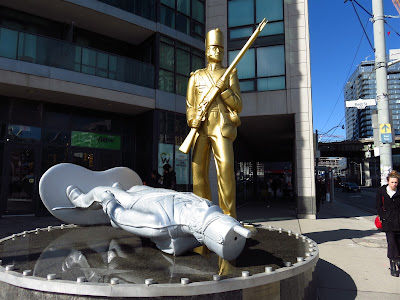 The War of 1812 was an important part of Canadian history and I'm glad to see that we are still committed to remembering those who stood their ground to defend our country.
Posted by Swordsman at 11:49

Labels: A Gord's Eye View of Toronto, My Published Books, War of 1812

amphibians are a set of creatures, teh correct word for the American attack is amphibious =)

Thanks Frank! It has been changed. I depend way too much on spell check.