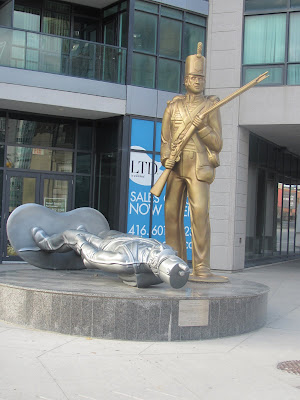 A couple of years ago, I heard that they unveiled a monument to the war of 1812, in Toronto.

I was excited about it and excited that it was in my neighborhood, close to Fort York. A week ago I was coming home from driving Teena over to the Island Airport and saw it again and knew that I would return for these shots.

Located on the NW corner of Bathurst and Front Street, it is appropriately called "Monument to the War of 1812 ".

It was commissioned surprisingly(to me) by condo developer Malibu Investments Inc. The monument shows one standing toy soldier and one lying down. The standing soldier is gold and represents a soldier from the 1813 Royal Newfoundland Regiment. The other is painted silver and is an American soldier from the 16th U.S. Infantry Regiment.

The monument was done by Douglas Coupland, an artist and writer. As I was putting together this post and talking to Teena about it, she mentioned "Hey, isn't that the author of the book your reading right now?" (PlayerOne).

When I checked it was. Now I'm reading the book. I'm the one who walked to the monument to take shots. I'm the one doing the research. She's the one that puts it together. One smart gal, my wife!

Back to the monument. 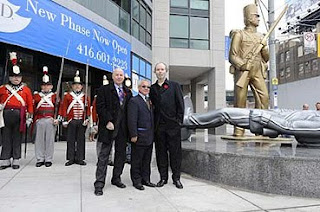 "I wanted to create something that was just a quick haiku moment for people driving by or walking by to think about the War of 1812," said Coupland. "But once I began getting involved in the project and doing research, I began noticing that the Americans are now starting to change history and they're saying, 'Well actually we won that,' or, 'Actually, we didn't lose' or whatever.

"So it's a war monument but it's also an incitement for people to remember what's going on in the present as well as the past."

The picture on the left was in the media and taken during the unveiling. Developer Rony Hirsch from Malibu Investments is on the right, Deputy Mayor Joe Pantalone is in the middle and artist Douglas Coupland, appropriately wearing a poppy, is on the right.

The War of 1812 was an extremely important period of time in Canada's history and, if it had not occurred, there would not be a Canada. 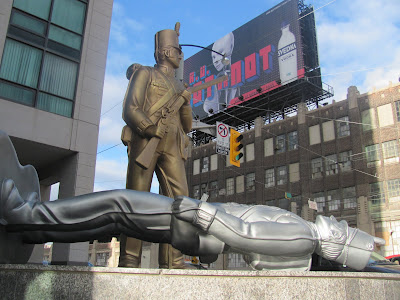