Book Review - Endurance: A Year in Space, A Lifetime of Discovery 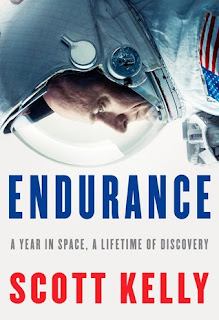 I have always found space travel to be so very interesting so when I read that Scott Kelly had wrote a book about spending an entire year on the International Space Station (ISS), I had to give it a read.

The veteran of four space flights and the American record holder for consecutive days spent in space, Scott Kelly has experienced things very few have. Now, he takes us inside a sphere utterly inimical to human life.

He describes navigating the extreme challenge of long-term spaceflight, both existential and banal: the devastating effects on the body; the isolation from everyone he loves and the comforts of Earth; the pressures of constant close cohabitation; the catastrophic risks of depressurization or colliding with space junk, and the still more haunting threat of being unable to help should tragedy strike at home--an agonizing situation Kelly faced when, on another mission, his twin brother's wife, Gabrielle Giffords, was shot while he still had two months in space.

Kelly's humanity, compassion, humor, and passion resonate throughout, as he recalls his rough-and-tumble New Jersey childhood and the youthful inspiration that sparked his astounding career, and as he makes clear his belief that Mars will be the next, ultimately challenging step in American spaceflight. A natural storyteller and modern-day hero, Kelly has a message of hope for the future that will inspire for generations to come. Here, in his personal story, we see the triumph of the human imagination, the strength of the human will, and the boundless wonder of the galaxy.

The book is very well written and it is so easy to tell as I read on that he is very much a detail oriented person. I believe that most astronauts are naturally inclined to be that way and have to be. Throughout the book he constantly stresses the detail of the things he does and the importance to that detail, whether it is inside the station or even more importantly during a spacewalk.

I knew that space walks were dangerous but never understood until I read this one how exhausting one could be. The space suits themselves can add danger to a walk as I found out when he described how one of his partners suits started to malfunction causing a huge water bubble to form inside the suit.

One thing I was disappointed in was that I wanted to read about the negative effects on his body after returning to earth after a year in space. He talks about it in the prologue and it sounds like something I would not wish to go through myself, but he never speaks of it again in the book. I think that telling the story would be worth a chapter or two at the end of the book as after all, the effect of long term space travel on the human body was one of the main reasons he and his Russian comrade Misha were sent up for a year.

It is an entertaining and interesting story and one that I would recommend.
Posted by Swordsman at 21:55