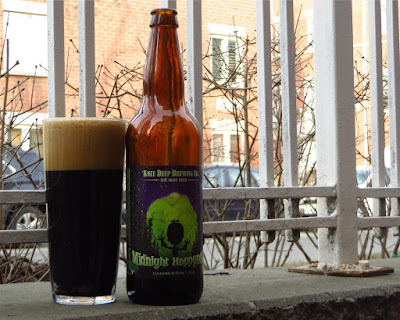 In this month's Canada Craft Club delivery came a 650 ml bottle of Midnight Hoppyness from Knee Deep Brewing in California.

Brewmaster Jeremy Warren started Knee Deep as a contract brewer in June 2010, having their beer brewed out of Mt. Tallac Brewing in Lake Tahoe. In September of that year, he met Jerry Moore, who loved his beer and came on as the company's CEO, with a vision of opening their own brick and mortar facility.

Early in 2011, they made a deal to lease Beermann’s Brewery in Lincoln, California, and in May started brewing their first batch of beer there. Over time they got to the point where they were brewing Knee Deep beer, completely from the Lincoln facility. The brewery was quite successful and they had to leave the Lincoln brewery for a much larger 28,000 square foot (2600 sq meters) plant in Auburn California.

According to the bottle, the Midnight Hoppyness is an Imperial Black Rye Indian Pale Ale. I always wonder why brewers put high test alcohol beers in large bottles. This one weighs in at 9.5% in a 650 ml bottle. Knee Deep puts this one out as a seasonal beer.

The beer pours deep black with a meringue like brown head. It's a very active beer and was hard to keep the head down while pouring. Because of the colour, I had expected coffee or cocoa to the nose, but instead was greeted with enjoyable citrus. It's a very fresh aroma, for sure. 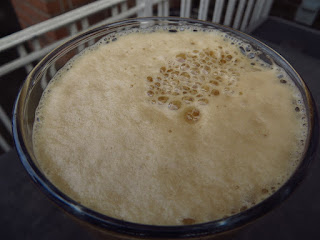 My first taste was confusing, as with all the citrus in the aroma, I expected some chocolate or coffee to start, which would then be quickly overpowered by citrus bitterness. This teaches me not to go in with expectations or to judge a book by its cover, or beer by its colour.

Instead this beer starts off very porter-like with chocolate and maybe a little coffee, which stays with you throughout. It is in the very long finish, right after swallowing, that the bitterness from the citrus hops come through. That wonderful bitterness stays with me, until my next sip.

I love a beer that changes itself during a sip, which the Midnight Hoppyness does. I would definitely would have this again!