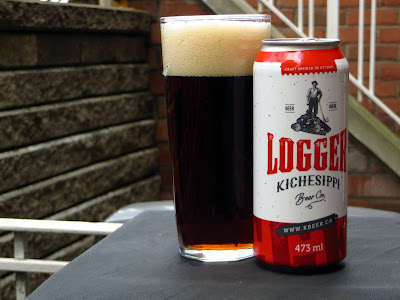 In my October Beer of the Month delivery, I received four tall boys of Logger Pennsylvania Porter from the Kichesippi Beer Co. I was wondering why a Canadian brewery would name a beer after a U.S. state so did some research.

Pennsylvania Porters are a style of beer that was brewed mostly out of Philadelphia back in the 19th century but using lager yeast instead of the ale yeast used by British breweries. Porters were very popular back in that time, in England as well as the U.S.

An influx of German immigrants brought lager beer to the United States, yet porter was so popular that even German brewers were producing a bottom-fermented version as part of their portfolio throughout the 19th century. The logic behind porter production at lager breweries was to cater to the Anglo-Saxon and Welsh populations of the mid-Atlantic states, who initially preferred the porter style over lagers.

I like how Kichesippi was cute with the name, using Logger instead of lager due to the logging history of the Ottawa area back in the 19th century.

Contrary to a regular porter, this pours a deep brown colour, not black like other porters, with a light brownish head. The brown of the porter is clear and I was able to see through it. There are lots of lacings when I sip. There is a little caramel to the nose.

My first sip starts a little watery but then tones of coffee and a little chocolate come through. Porters are delicious and full of flavour. The Logger too is delicious but with the flavours backed off a little making it much lighter tasting.

It's currently not available at the LCBO or the Beer Store. If it was, I certainly would be buying it!