Book Review - Shatner Rules: Your Guide To Understanding The Shatnerverse And The World At Large 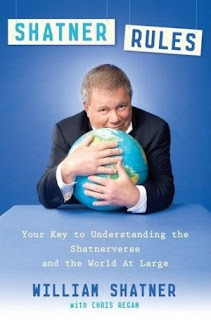 I admit, I was a fan of the old original Star Trek series. William Shatner has been kidded for years for his acting in it but he has always survived in the world of show business.

I have never read either of the 2 books he wrote previously about his life, Star Trek Memories or Up Till Now: The Autobiography, but this one, Shatner Rules, interested me.

"You love William Shatner.
You admire his many and varied talents.
You appreciate his creativity and willingness to take risks.
You want to learn his master negotiation techniques.
You wish you could hang out with him.
Admit it. You want to BE William Shatner.

This collection of rules, illustrated with stories from Bill's illustrious life and career, will show you how Bill became WILLIAM SHATNER, larger than life and bigger than any role he ever played. Shatner Rules is your guide to becoming William Shatner. Or more accurately, beautifully Shatneresque.

Because let's face it...Shatner does rule, doesn't he?"

It is a fun tongue-in-cheek book about the rules to live life as he has. He explains that there are two Shatners, the public, somewhat pompous one and the private one where he can truly be himself.

The book is full of antidotes and stories about his life, divided into the different rules to being Shatner such as "Rule: Always Have a Spare Set of Underwear on" or "Rule: Don't Trust the Facebook" (hilarious story).

Sometimes, many times, he wanders off topic. In sections, he is a little pompous but the book is very enjoyable.

The first chapter is "Rule: Say Yes". It was a funny chapter and a very true rule.

"Yes" means opportunity. "Yes" makes the dots in your life appear. And if you're willing and open, you can connect these dots. The lines you make with those dots always lead to interesting places. "No" closes doors. "Yes" kicks them right open. 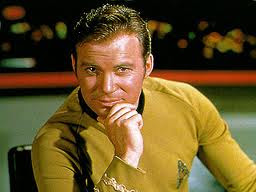 He does show throughout the book how saying yes to questionable projects, (his first singing album) paid off for him in the future. It is also a funny chapter.

I also really enjoyed "Fourth Rule for Turning 80: Get Out of Bed". George Burns used to say the same thing. This is a more serious chapter about being 80 and how he is facing the fact of his own mortality. "When I woke up on my 80th birthday, I felt that life might be over soon. That was terrifying."

I also love how he is proudly Canadian throughout the book and devotes a full chapter to that "Rule: Remember Where you Came from ... Eh?" Another great chapter. Heck, they all are!

A fun easy to read book that I quite enjoyed. A must read for any fan!
Posted by Swordsman at 20:17

It's a great read, I agree. Had me laughing out loud.

PS I think you mean anecdotes, not antidotes. No poison pen here.