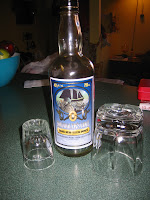 "Just like smugglers using the cover of the night to deliver their goods during prohibition, this rum's rich and deep auburn darkness conceals within the history of its making."
Quote from Rumshop.net September 2003 newsletter

For Christmas each year, Teena's sister, Sarah and her husband, Joey, send us some much appreciated bottles of rum, which are not available here in Ontario. One of my favorites is Smuggler's Cove Dark Rum brewed by Glenora Distillery located in Cape Breton, Nova Scotia.

Glenora opened in 1990, not just as a distillery but also as a nine room inn complete with a 50 seat dining room and a pub on the grounds.

It's major claim to fame is being the only producer of single malt whisky in North America with their Glen Breton Rare Canadian Single Malt Whisky . They are very proud of this and you can read about their whisky production all over their website.

The also have extensive coverage with their battle with The Scotch Whisky Association over the use of the word "Glen" in it's name. Their claim is that "glen” is a Scottish term, and only whisky produced in Scotland should be called Scotch whisky. Glenora claims they use the "Glen" to reflect the region as the distillery is located in Glenville, Cape Breton, outside the town of Glenora Falls, and do not call their product "Scotch". The battle has seesawed back and forth.

Glenora is very proud of their whisky-making and their entire website is almost dedicated exclusively to their single malt whiskey.

Being a rum drinker and a fan of Smuggler's Cove, I was puzzled by Glenora's lack of enthusiasm for their rum product. I had to do a very thorough search through their website to find where they even admit to making rum. And they mention it almost in passing: "In addition to distilling single malt whisky, which is presently aging in oak barrels, Glenora blends and bottles Smuggler's Cove dark, white and amber rums."

They don't even mention that at the 2003 International Rum Festival, it won a Gold Medal in the Dark Rum Category. Not too shabby but I found that gem on another rum website.

Smuggler's Cove is an excellent tasting rum and stands the ultimate test of being sipped on it's own. It has a nice molasses taste and is a very smooth going down. I really enjoy this rum. You would think that Glenora would show a little more pride in having made this.

Did you notice the picture at the top of this article. We're out!
Posted by Swordsman at 12:53

Great blogging, Gord! It sounds like it is time to send a Nova Scotia care package to you. When I was done reading your blog I felt inspired and poured the last drink of Smuggler's Cove dark rum into a glass with some coke.

Best rum ever. I've been drinking it since I went to SMU in the 90s. Now that I live in Alberta, I have to stash plastic pints in my suitcase. It's makes a lousy antiseptic as I found out after my friends poured it on my sliced hand. Jerks.

I've got a pint on Smuggler's coming home with me for you!

Hello Gord, I came across your blog while looking for Smuggler's Cove Dark Rum and I would like to be able to get this rum into Ontario's LCBO also. My Dad used to drink it with milk and a bit of Bailey's and that is how I like it also. I am very disappointed I can't get it here where I don't get back home to Nova Scotia often enough. Love your site here............Rusty

The reason they're not so enthusiastic about their rum is that it's produced in Paraguay (iirc), then shipped up and bottled in Cape Breton. A few years back we toured the distillery and I inquired about it for the same reason. And rightfully so, seems a bit less 'home-grown' that way. Still my favourite rum by a longshot, though.