My October 2015 Beer of the Month Delivery 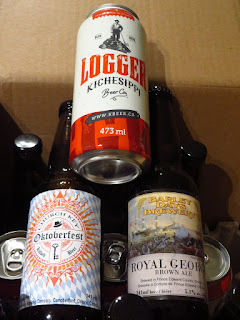 When I got home tonight, Teena had good news and bad news for me.

The good news was that my Beer of the Month delivery had come this afternoon. The bad news ... she had just missed it.

After having dinner with some buddies up in North York, I stopped into the post office and was glad the package had already been dropped off there.

Inside were four bottles or cans each from three different breweries, along with the monthly newsletter. The newsletter had an interesting fact in it. Hammurabi's code, written in 1792 BC, made special mention of beer parlours. Owners who overcharged customers were to be drowned; high priestesses caught in a beer parlour were to be executed by fire.

So what did I receive this month?


Looks like I have some fun tasting ahead of me!
Posted by Swordsman at 21:06