My August 2015 Beer of the Month Delivery 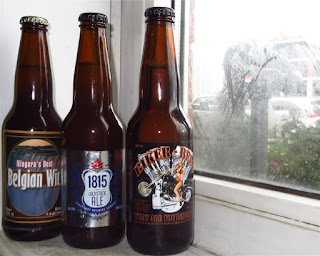 About ten minutes after I got home from work, the doorbell rang. I opened to find the postman holding this month's Beer of the Month package from Amazing Clubs. Always exciting!

Each month we'll deliver 12 full-sized bottles of hard-to-find, specialty microbrews from award-winning breweries. Each shipment will include up to four different varieties of premium, hand-crafted beer carefully selected by our experts and brewed in limited quantities by master brewers. We sample hundreds of microbrewed beers every year and only the best-of-the-best become selections of the Beer of the Month Club.

Inside were twelve beers from three breweries and a newsletter describing what I had received along with a recipe and a couple of beer facts. 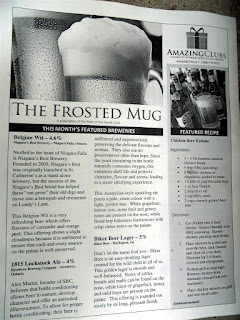 Here's one of the beer fact: The first six-pack of beer was produced by the Pabst brewery in the 1940s. The brewery conducted numerous studies, which found that six cans were the ideal weight for the average housewife to carry home from the store. Never knew that.

So what did I get?

Four bottles of 1815 Lockstock Ale from Strathroy Brewing Company. I have written about them before. Also included were four bottles of Niagara's Best Belgium Wit,. I have featured another one of their beers before as my Beer of the Week. The third beer has the funniest label and brewery name, Biker Beer Lager from Biker Beer in Burlington, a brewery I have not heard of before.

Can you judge a beer by its label? 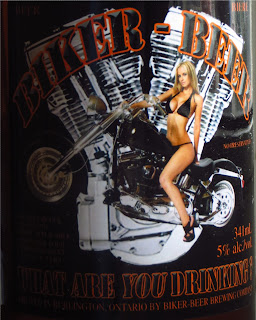 I'm looking forward to trying them all!
Posted by Swordsman at 18:10