Arrabal at the Panasonic Theater 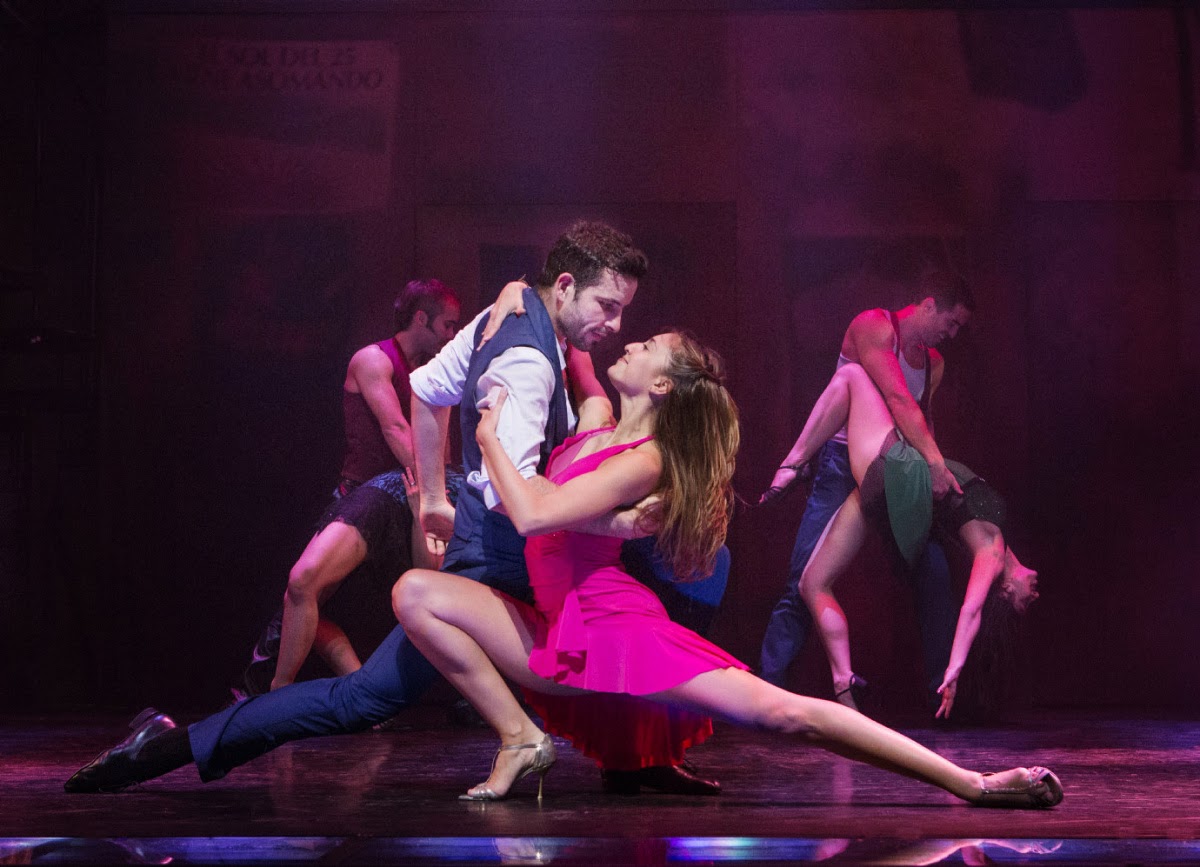 This afternoon Teena and I went to see Arrabal at the Panasonic Theater. I had seen the live preview at First Canadian Place in February and this sure looked like a play to see!

ARRABAL, an exciting World Premiere, is an explosive story told entirely through dance and the music of multiple Academy Award® winner Gustavo Santaolalla (Brokeback Mountain, Babel) and his band Bajofondo.

Using a modern tango dance vocabulary never seen before, director Sergio Trujillo (Jersey Boys, Memphis) and choreographer Julio Zurita create a dramatic vision that is emotional, sexual and powerful. With a book written by Tony Award® nominee John Weidman (Contact), follow Arrabal, our heroine, in this coming of age story as she enters the underground world of Buenos Aires’ tango clubs and discovers the violent history that took her father and disrupted a nation. ARRABAL is based on the true story of the political violence that threatened to destroy Argentina in the 1970’s. With a live band and performers direct from Buenos Aires, experience the sensual beauty and political intrigue that is ARRABAL. 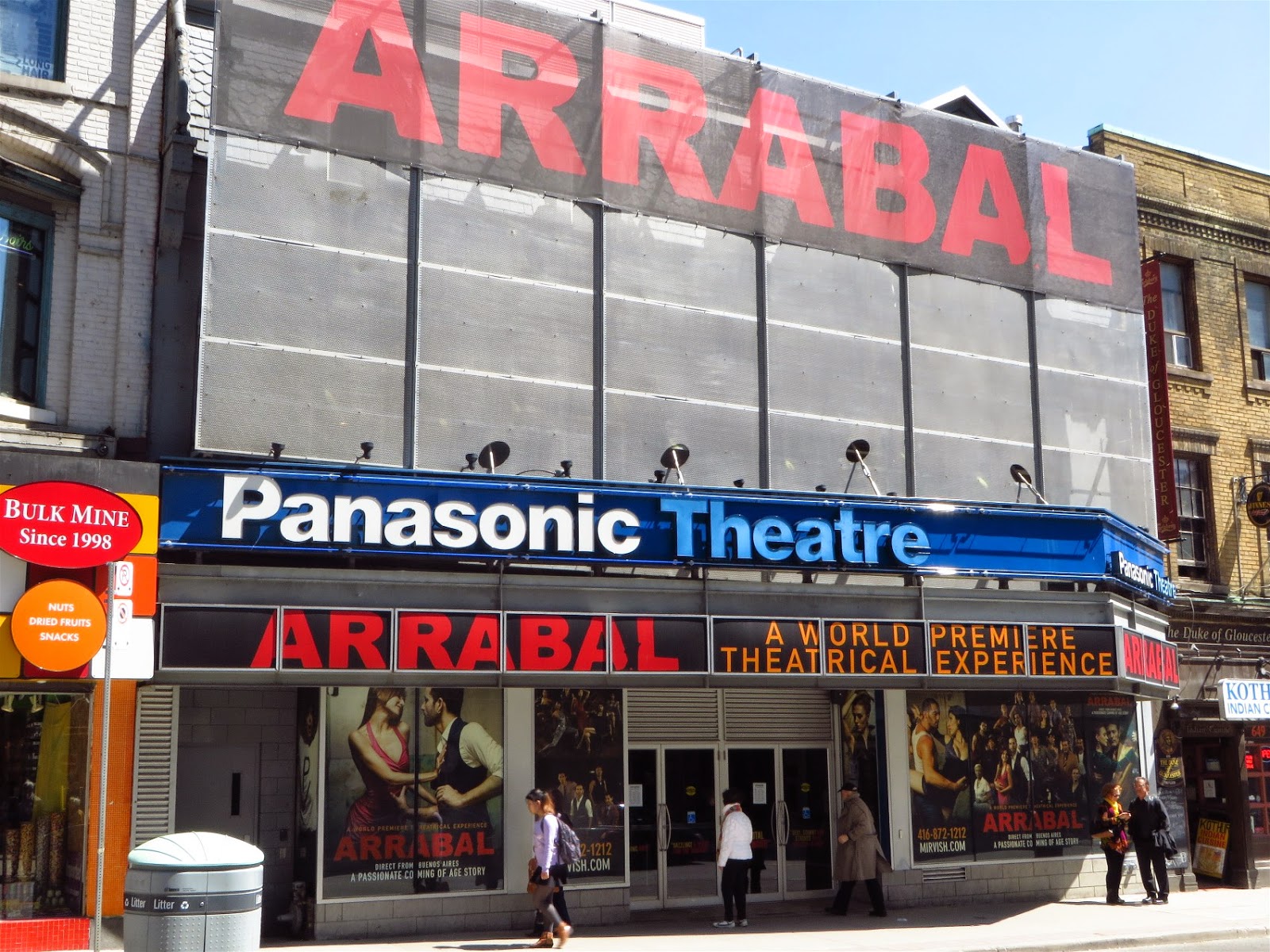 The theater seats over 700 and it was full for the matinee performance. If you arrived early enough, you could take a half hour Tango lessons from the stars of the show. We figured we would have to be there real early for this so got there about twenty minutes before the show started to watch the lesson. We were allowed to take pictures at this point. The first picture is of two of the stars/instructors. 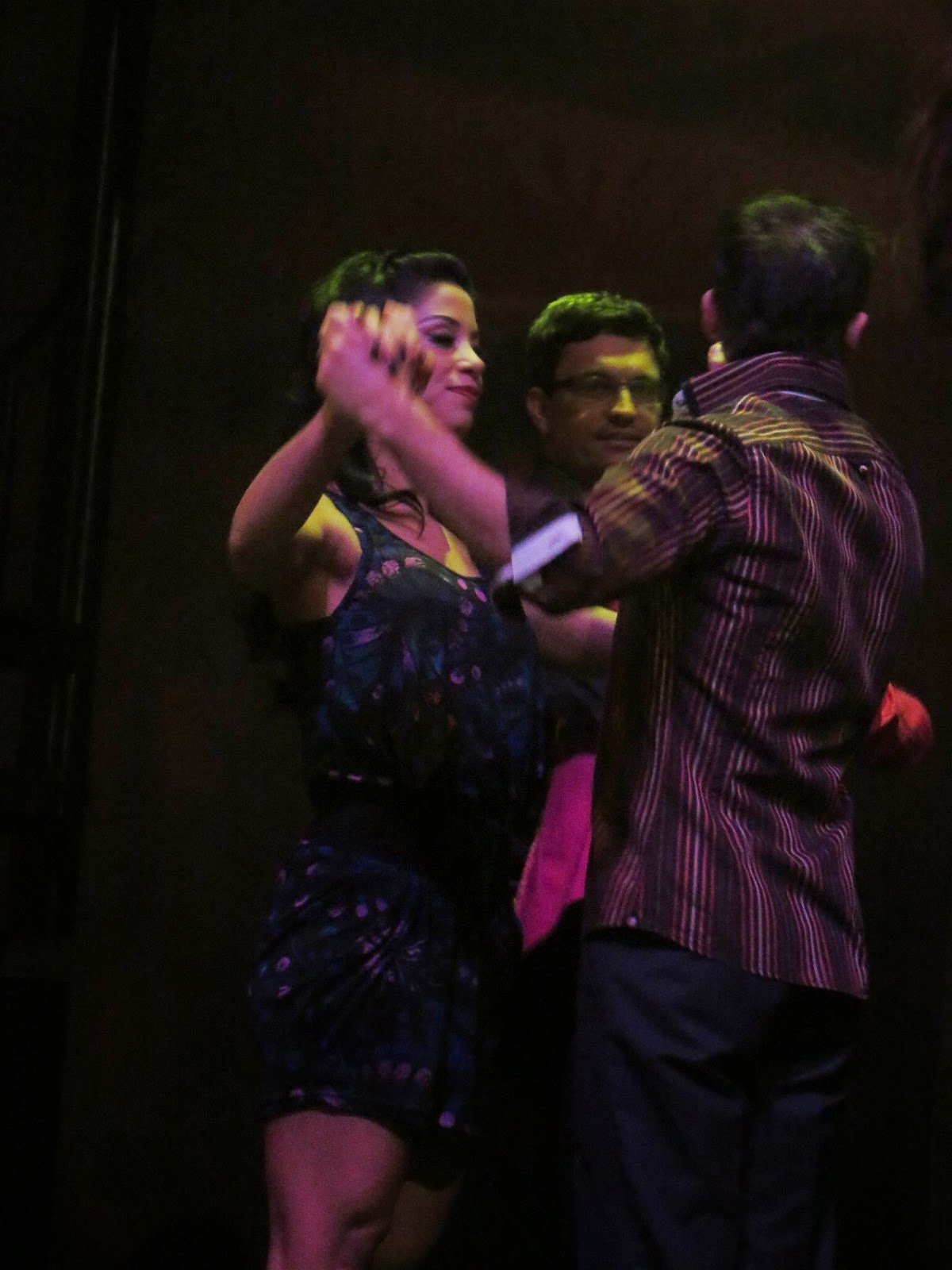 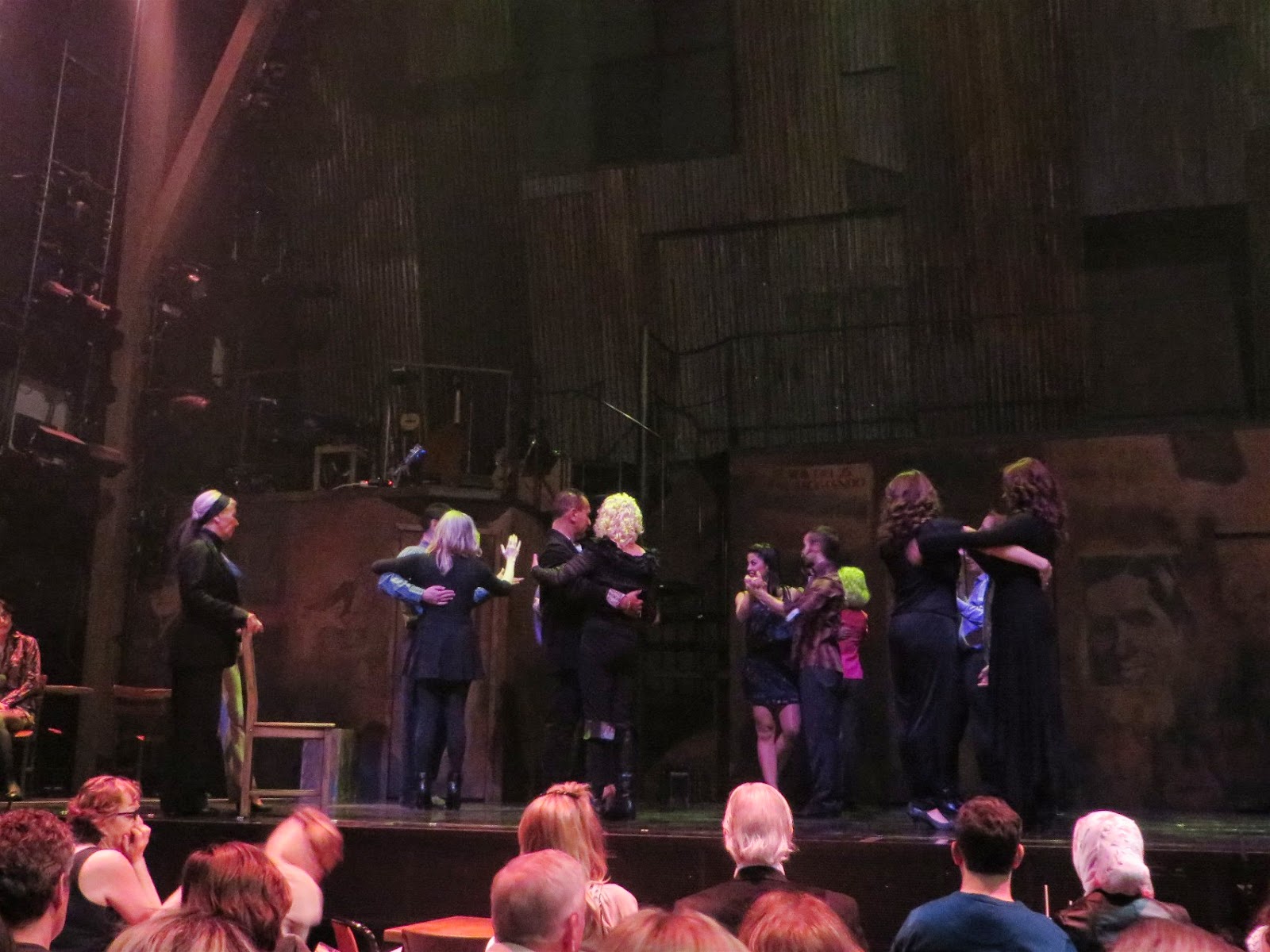 The play itself has very little dialogue and this comes from newscast projected on the rear wall of the stage. This technique is used quite effectively during the performance. As the description above says, the entire story is told through dance. I love the tango and I must say that these dancers are amazing! The dancing is slick, sexy and at times breathtaking. These shots are from the publicity photos. 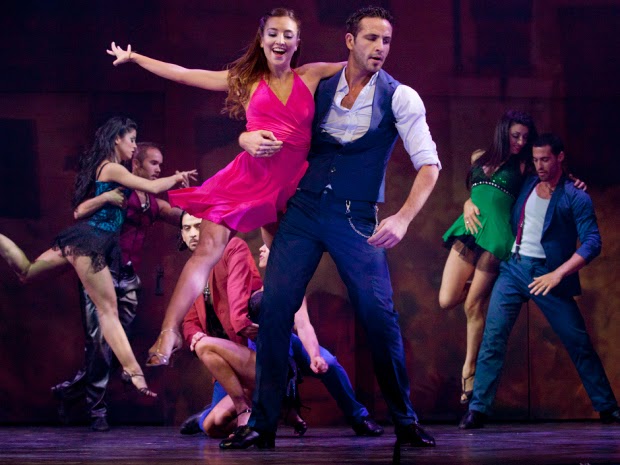 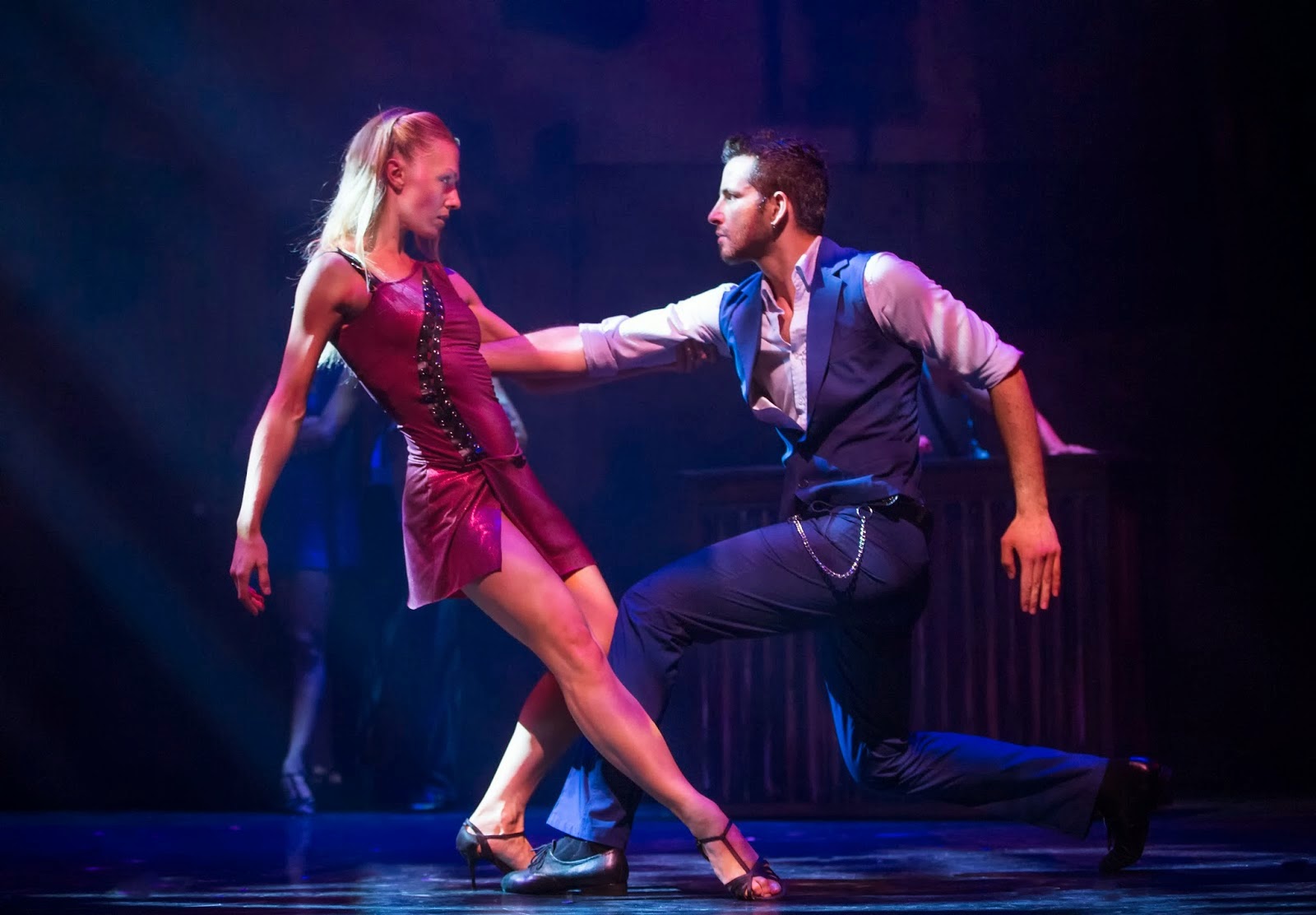 I really enjoyed this production!. The story was good, the dancing was sensational and the band, Orquesta Bajofonderos, was fabulous! I have to Google Marcelo Lupis who played the violin. I was very blown away by him. He was all over the stage playing and at times attached a blower like device to his violin to enhance the sound. he was incredible to watch and hear.

The story line was a little difficult to follow in places. Afterwards, Teena and I discussed some parts of the story that we found confusing. Perhaps a little dialogue would have better sewn together the story to help it flow.

The action was not just confined to the stage but also came into the audience, which I liked. I thought the people at the end of our row might be arrested by the Junta in one scene. After the play and curtain calls, the audience was invited onto the stage to take part in one last dance. We didn't go up but it was fun to watch.

If going and not wanting a lesson, I would recommend going early, watching the others dance and perhaps reading the synopsis of the play to make it a little easier to follow.

I would recommend Arrabal and am thinking of going back again for a second show before it's stay in Toronto ends.
Posted by Swordsman at 15:30