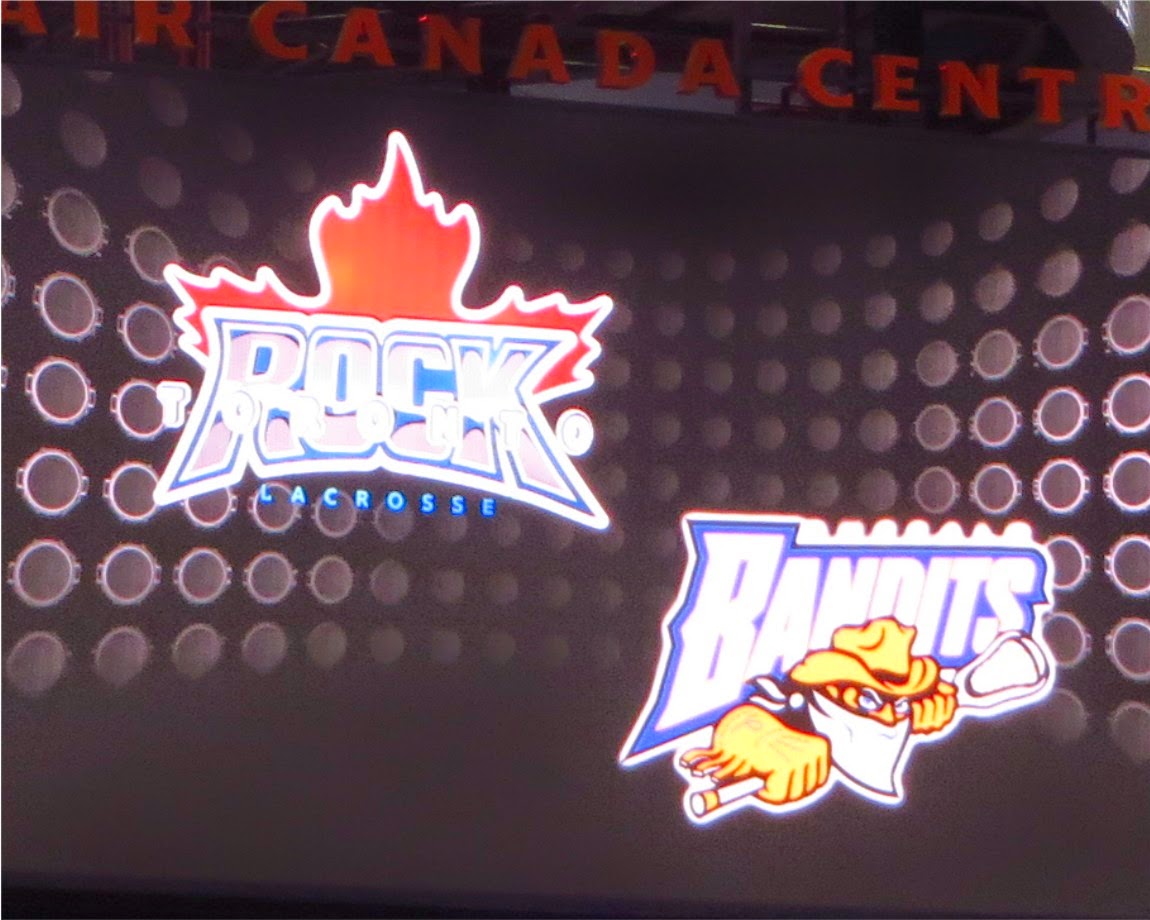 Tonight the Toronto Rock played host to the Buffalo Bandits in what would be both a battle for second spot in the NLL East and a playoff preview.

No matter what happens in the next two weeks, Toronto and Buffalo will meet in the first game of the playoffs which is sudden death. The question is, who will host the game? Going into tonight's game, the Rock had won two in row while the Bandits had lost five in a row.

First, a word of warning. Avoid the Nathan's Dogs at the ACC. Teena and I each had a foot long bacon dog which was more grease than dog. Never again! 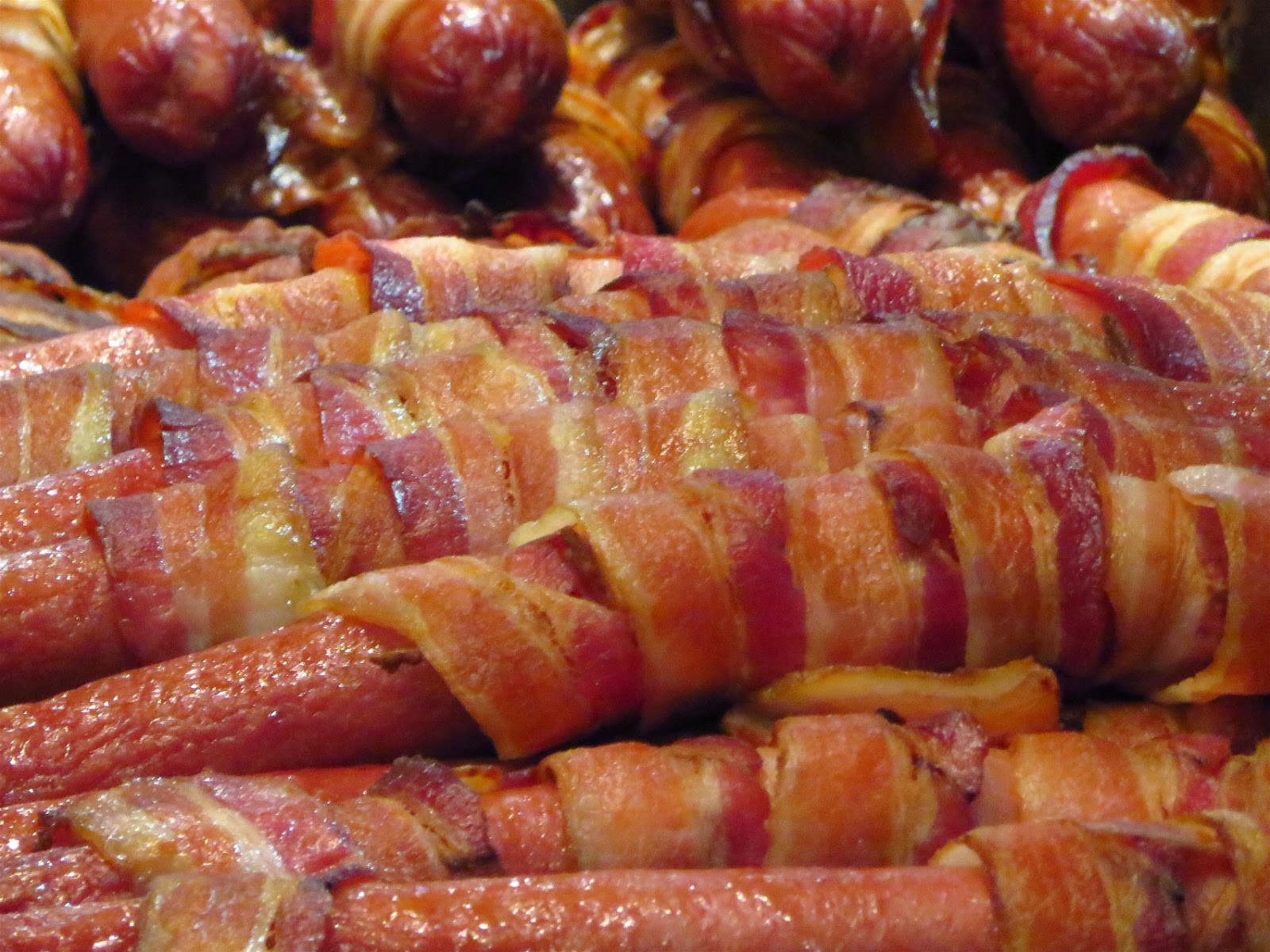 Before the game, the Toronto Rock Cheerleaders came on to rev up the already fired up crowd of 11,276! 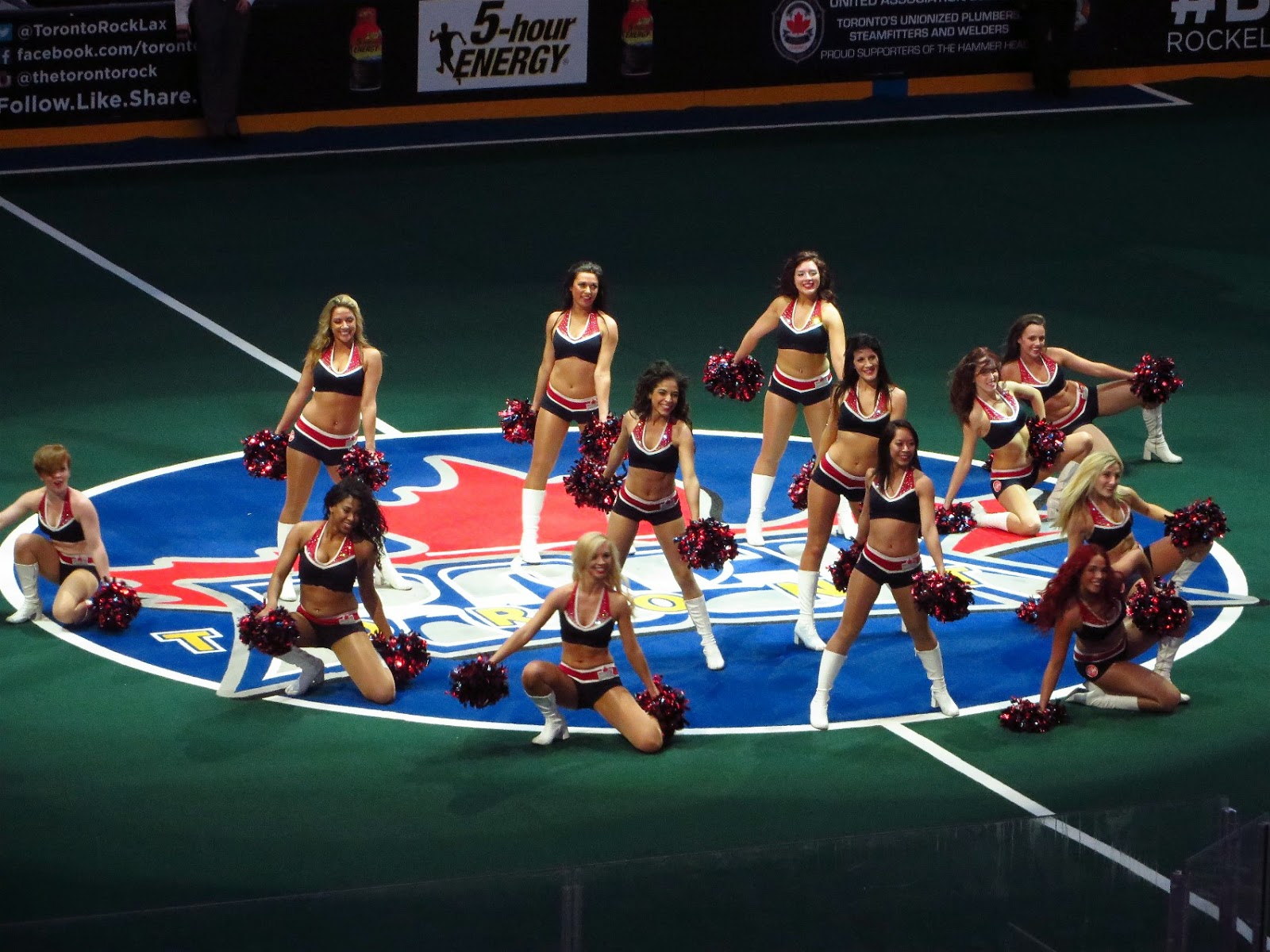 The Toronto Rock took a few moments for a team gathering by the net, then it was game time! 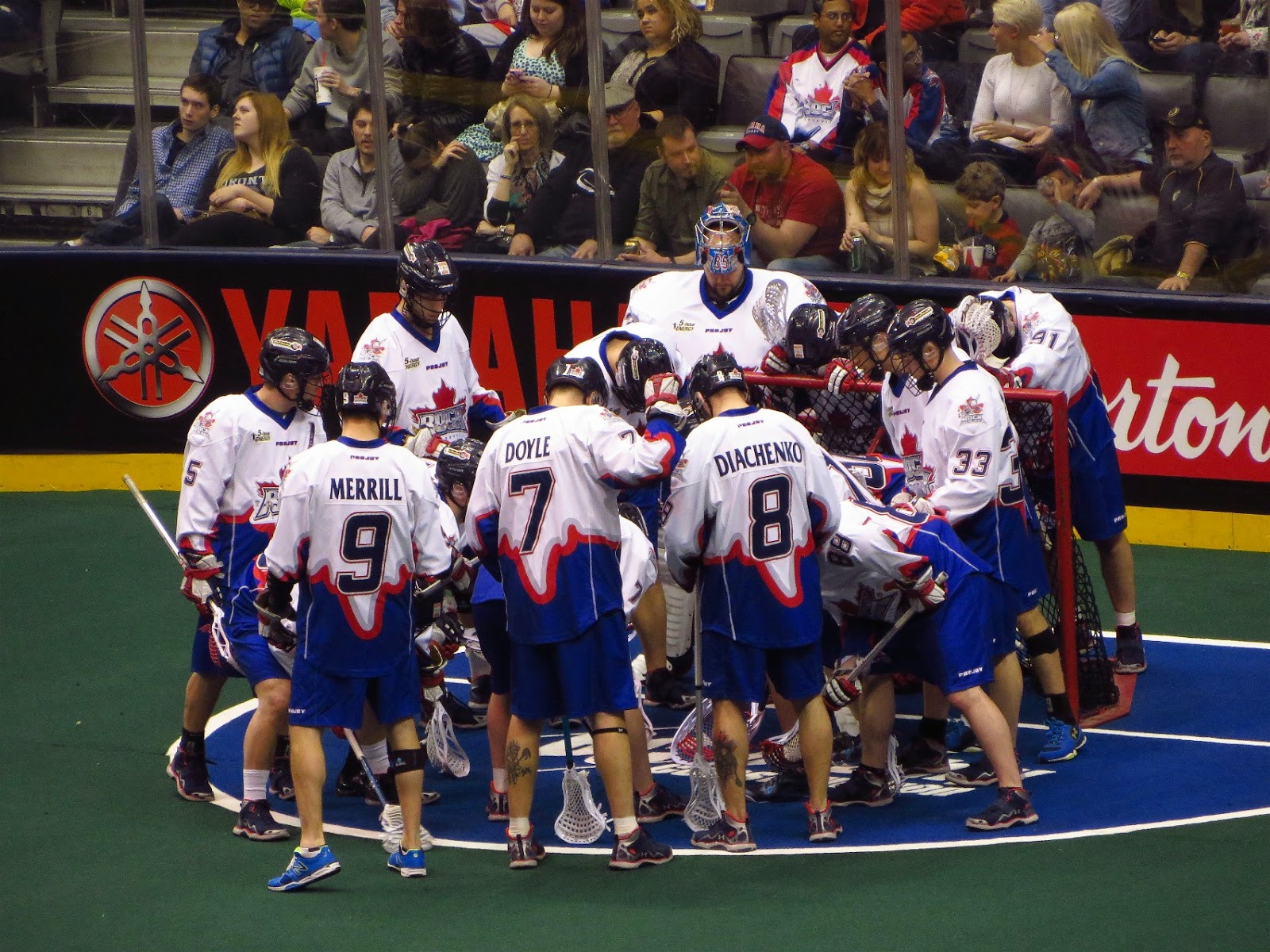 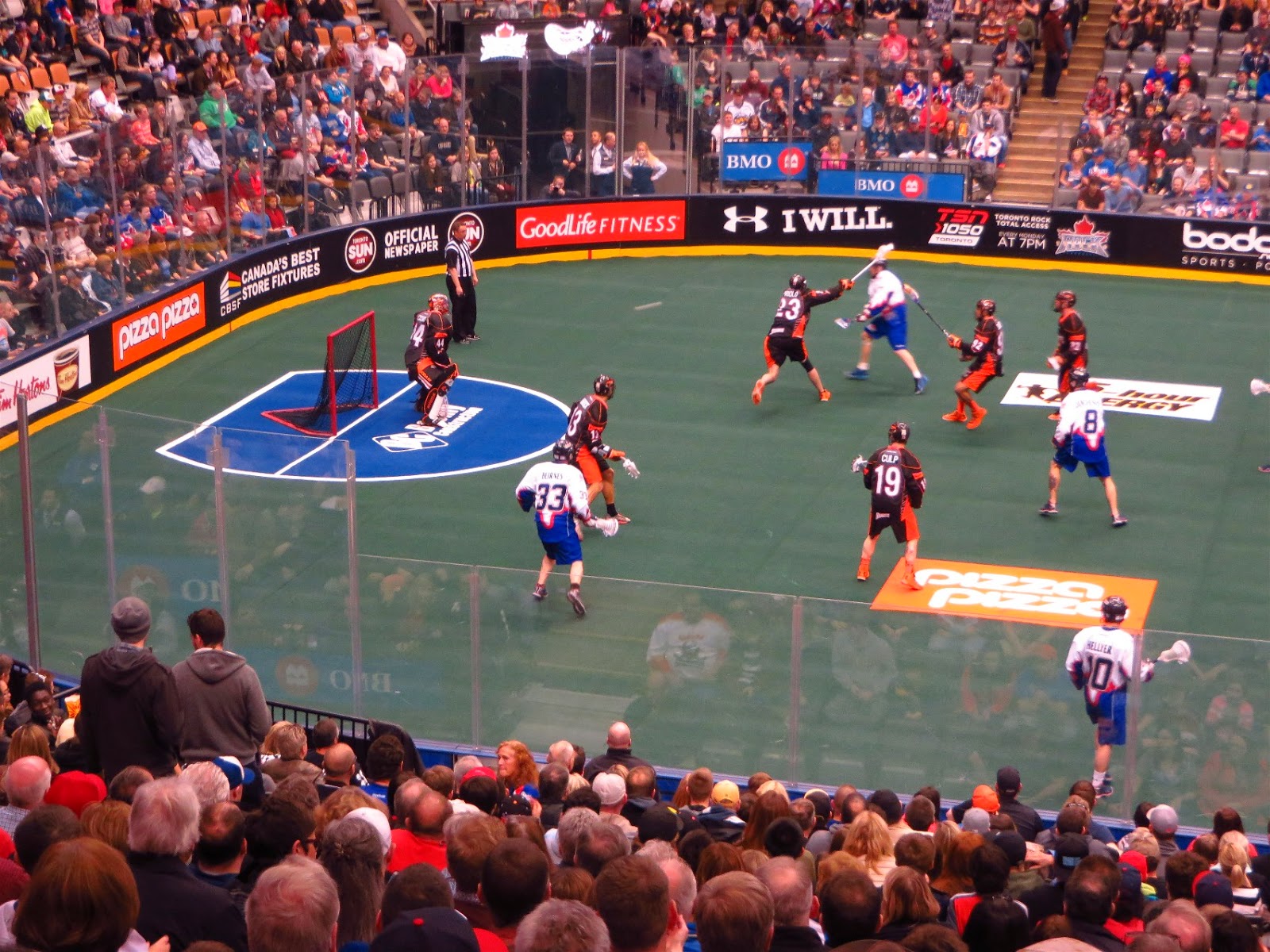 Toronto opened up the scoring and scored three unanswered goals in the final four minutes of the first quarter for a 5-2 lead. Nick Rose was solid in net. The house was rocking! 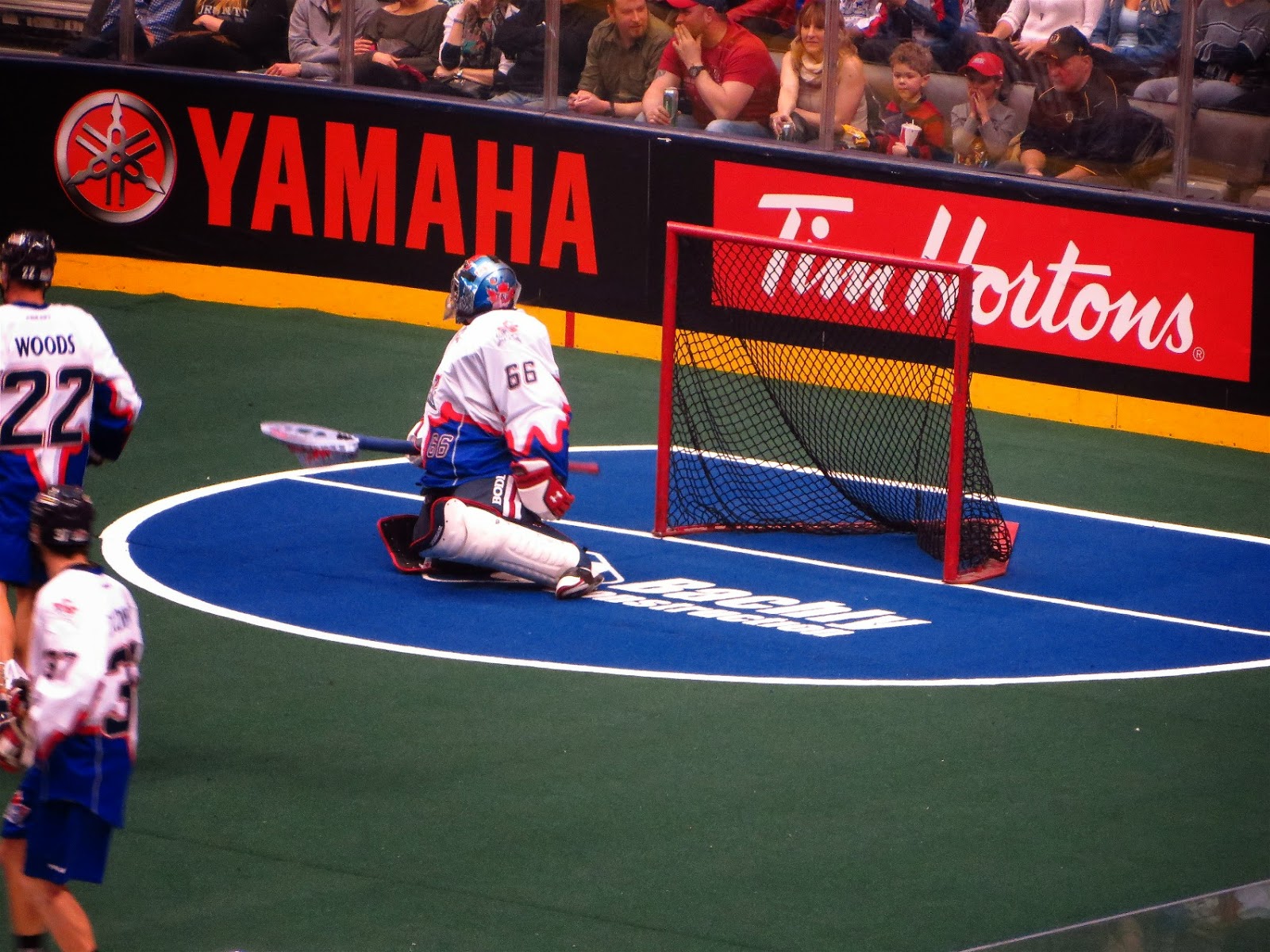 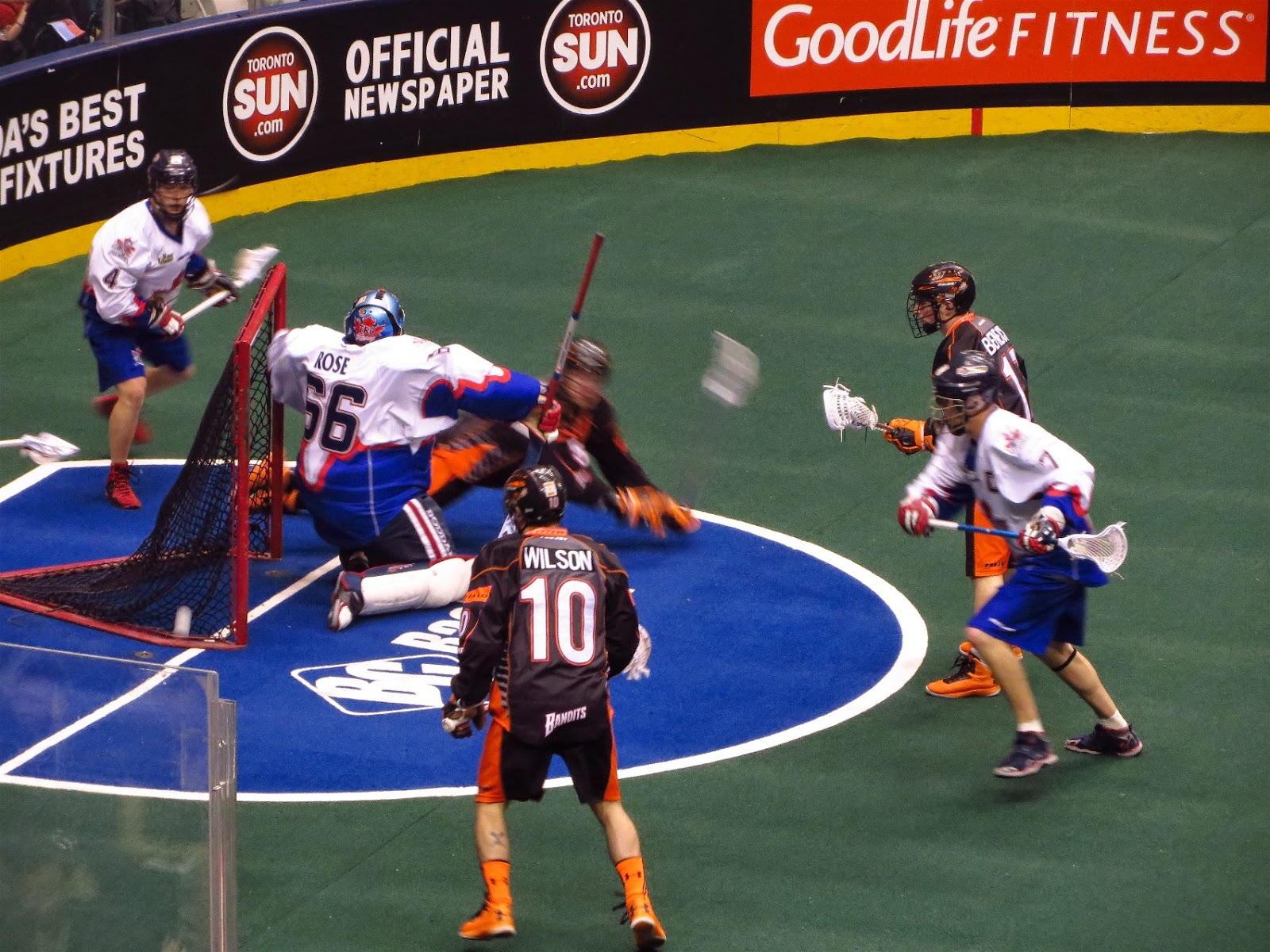 With 17 seconds left in the quarter, though, the Bandits' Steve Priolo hit the Rocks' Rob Marshall with a vicious elbow to the face which knocked Marshall through the open door of the Bandits' bench. Then Priolo proceeded to jump into the bench himself and knock Marshall over the open bench door. The Rock rushed the bench and what looked like would be a wild bench clearing brawl just saw Marshall and Priolo go at it. 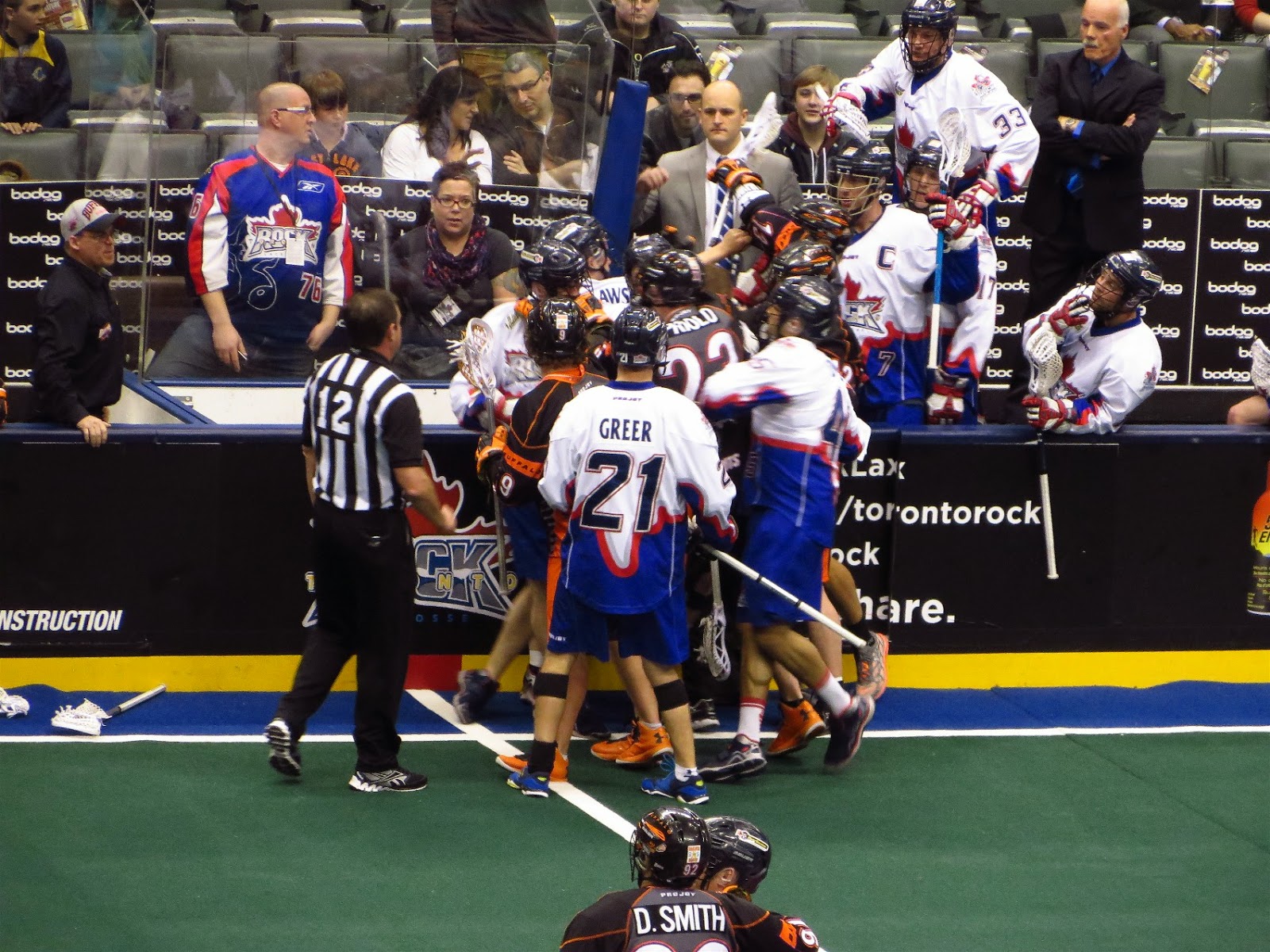 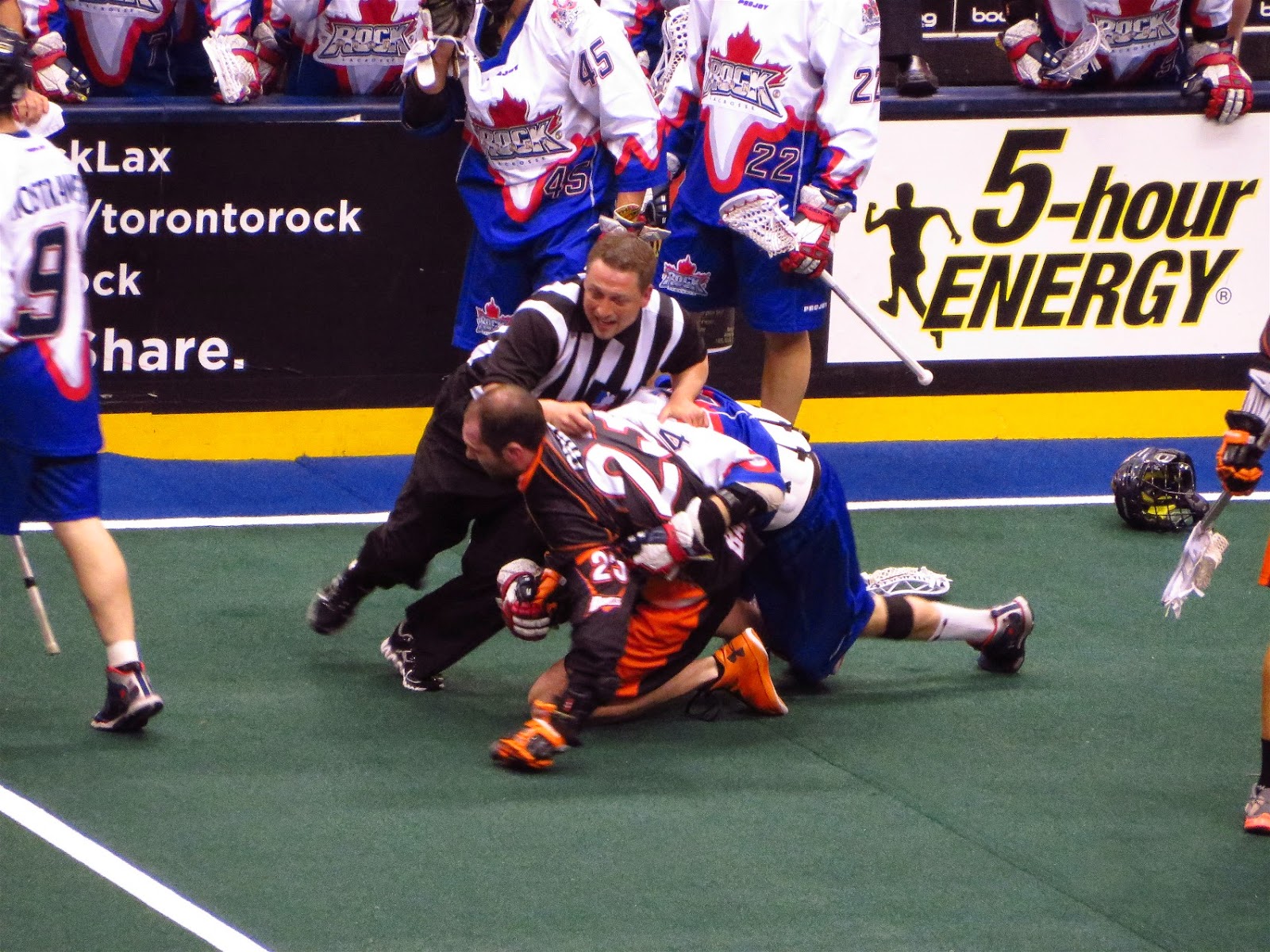 The second quarter saw the Rock give up three goals in a row before Kevin Ross scored his first goal of the season. Look just behind the goalie's feet. Ross shoots. Ross scores! 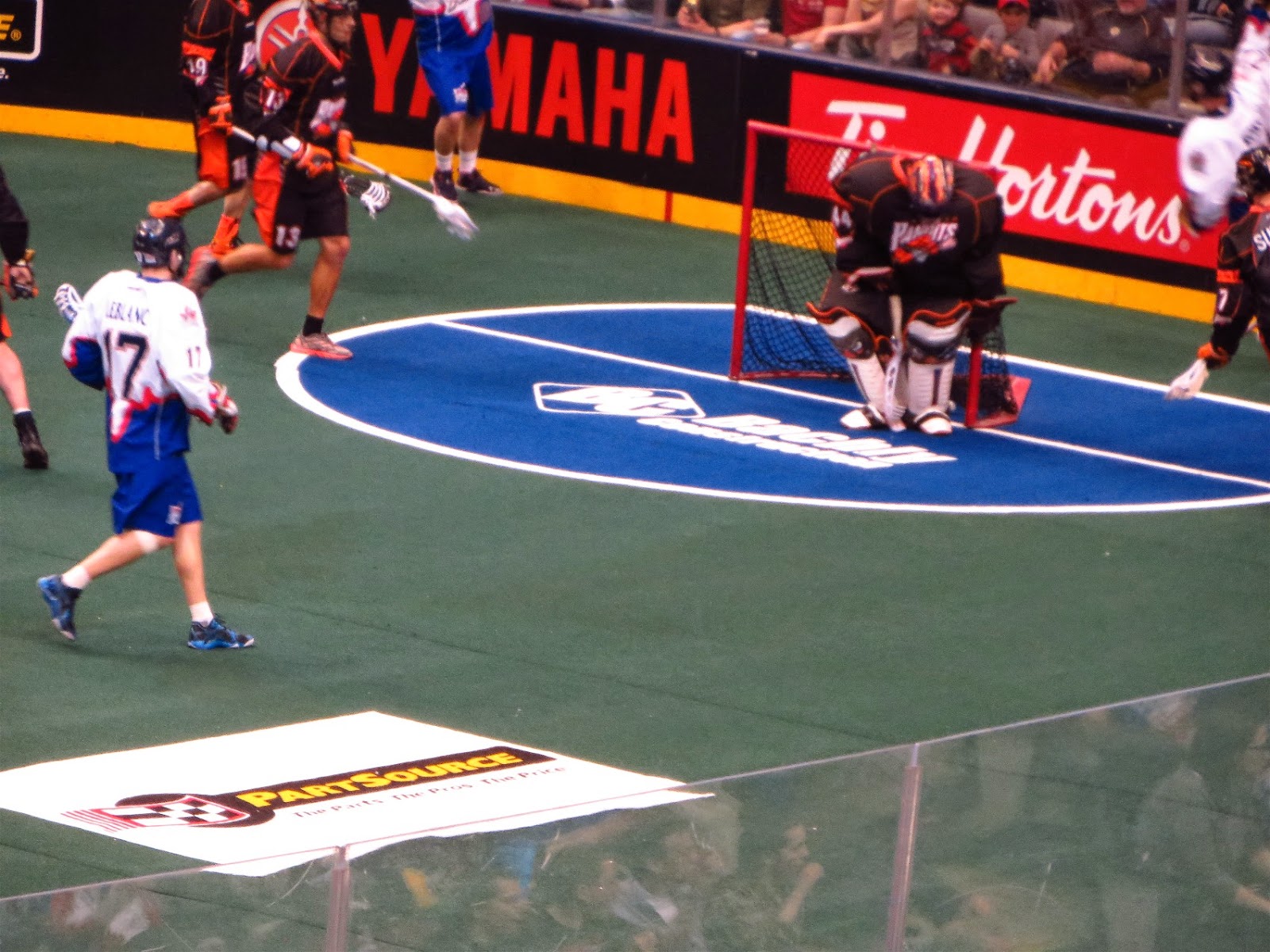 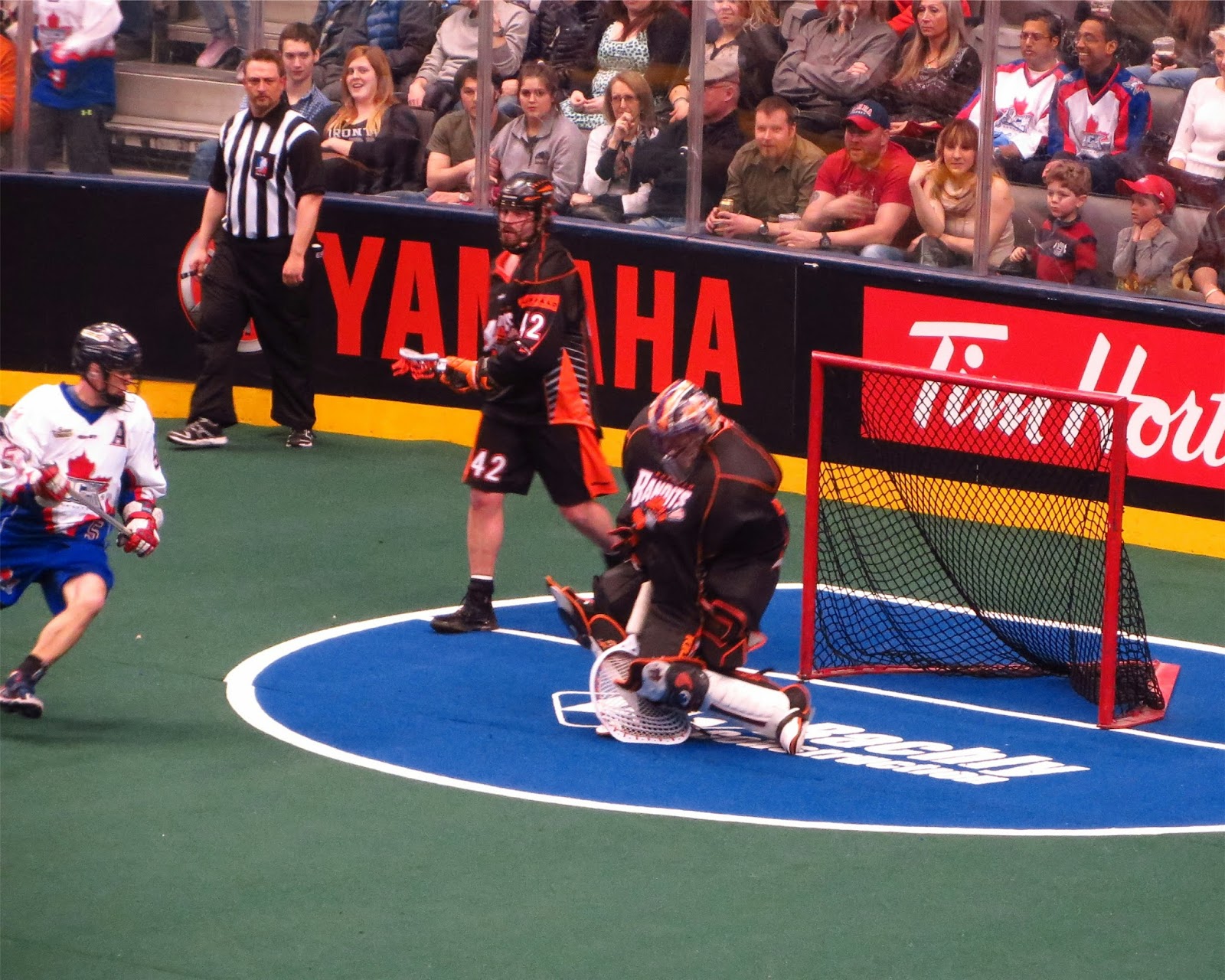 It was a tight game and the Toronto Rock Cheerleaders teeshirt said it all. Keep Calm and Rock On! 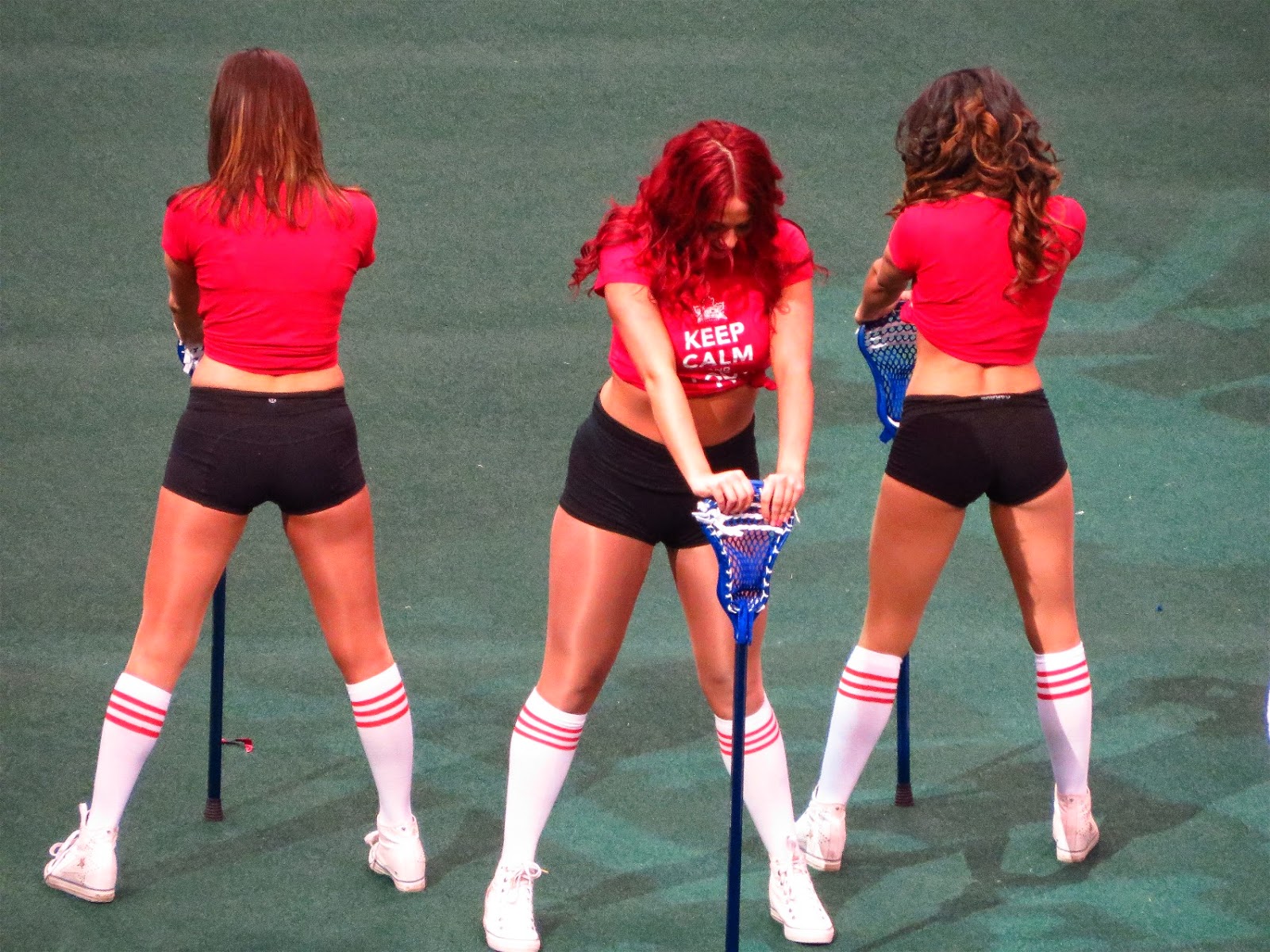 Iggy enjoyed the cheerleaders performance and even help one off the playing surface! 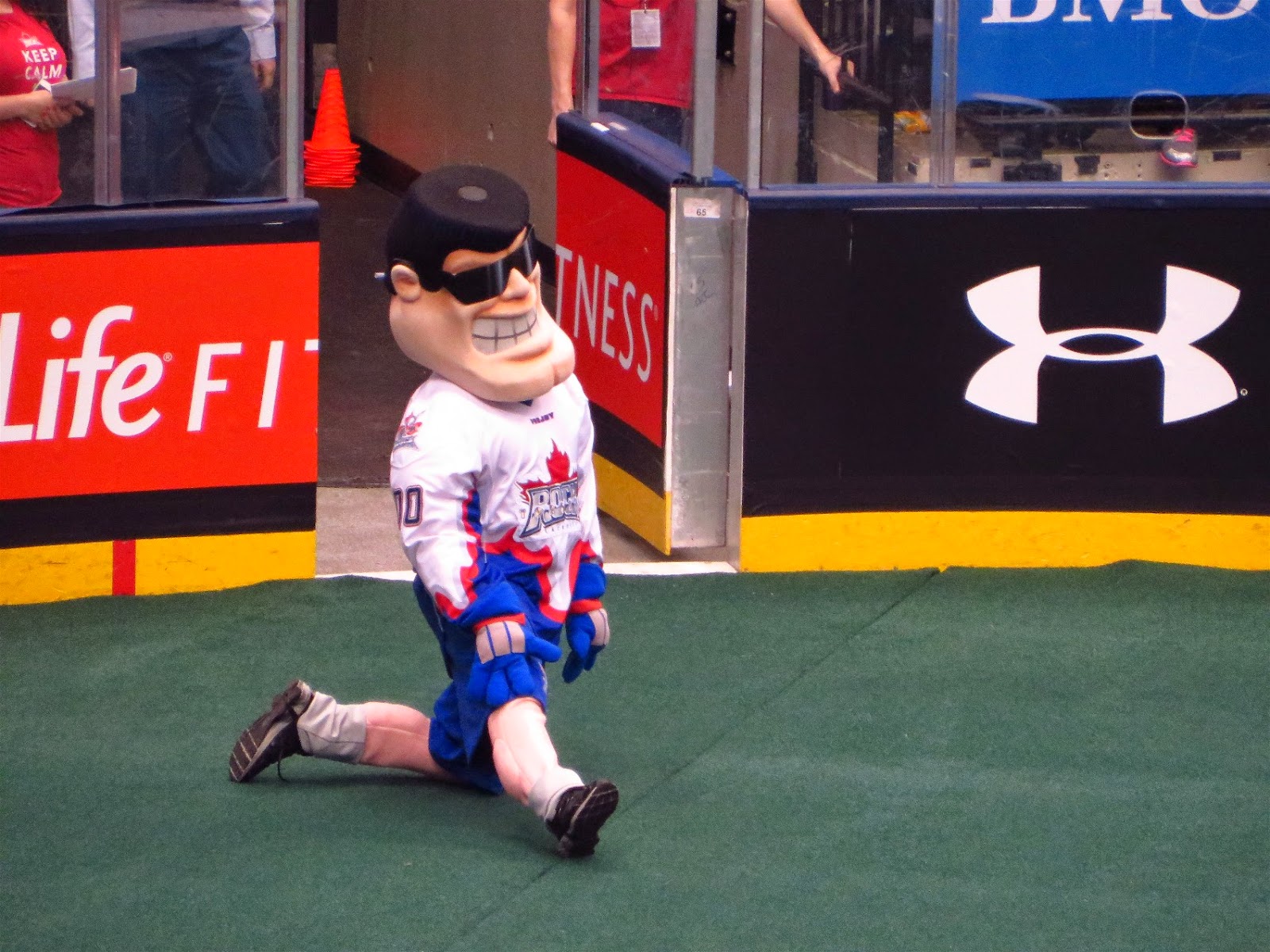 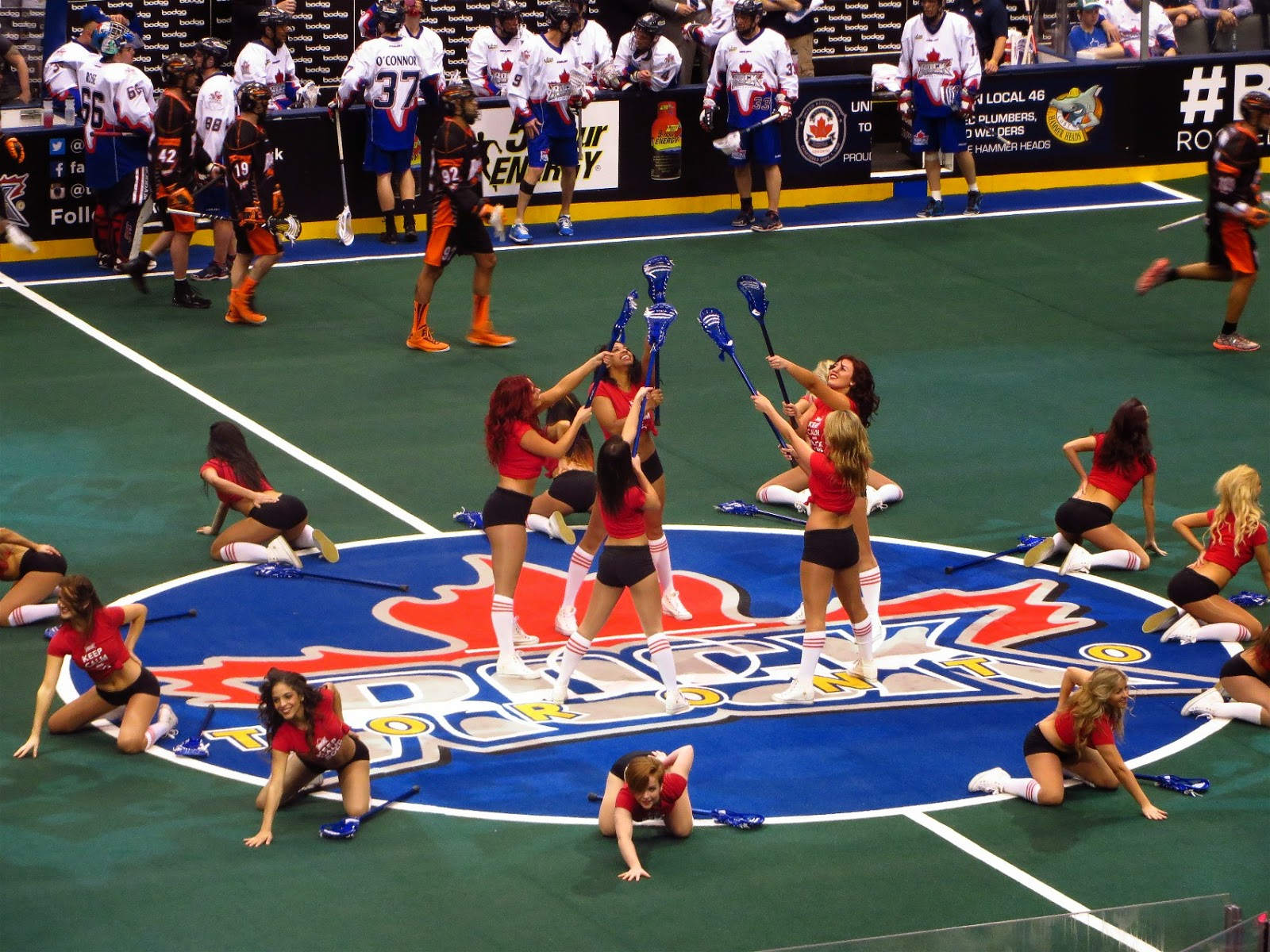 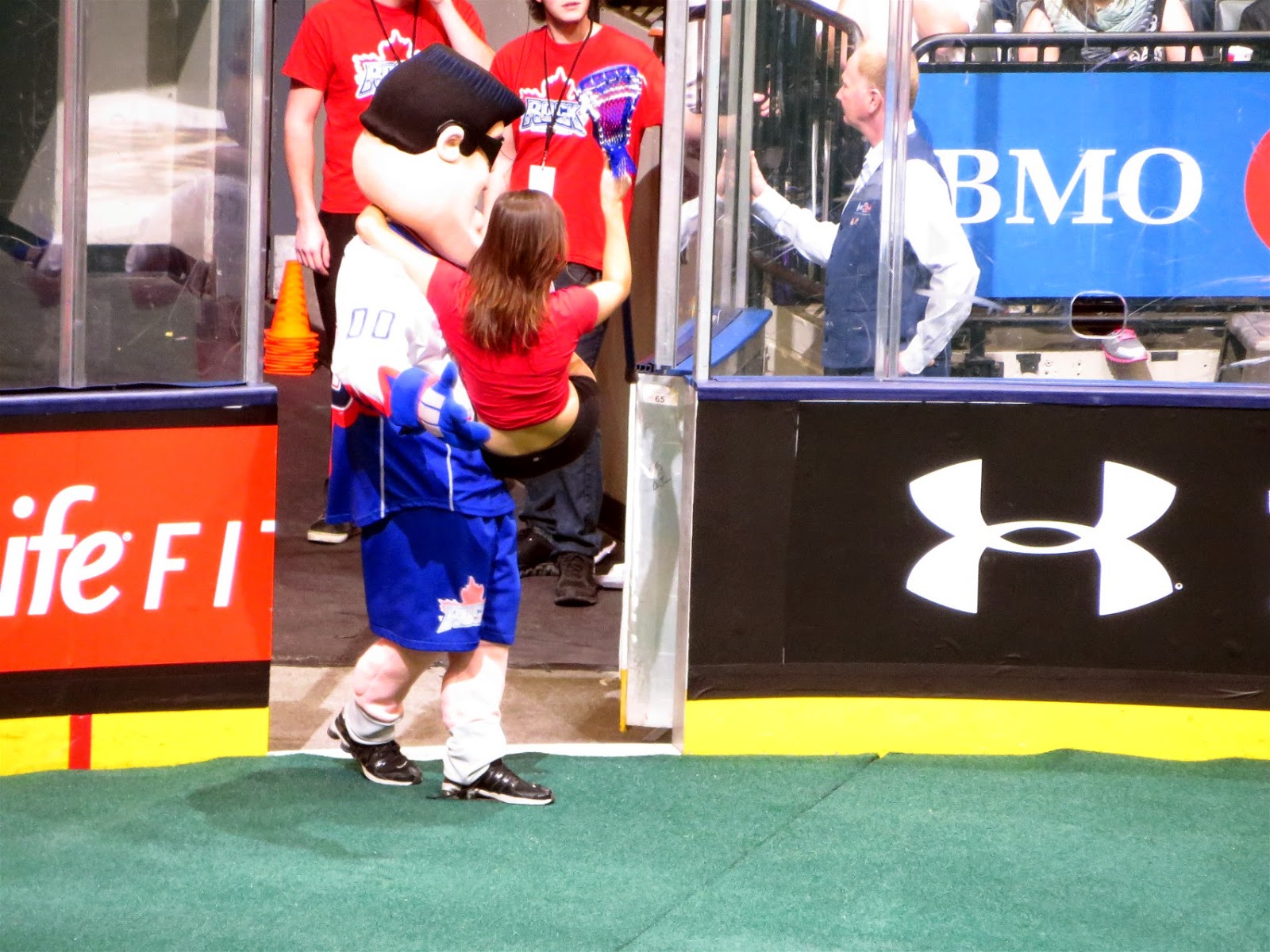 The third quarter was tight. The Rock scored the first two of the second half before the Bandits put in a couple of their own in the space of a minute and a half. With 4:24 left in the quarter, it looked as if the Bandits had pulled within one but the Rock challenged the goal and sure enough the bandit player had a foot in the crease. No goal! 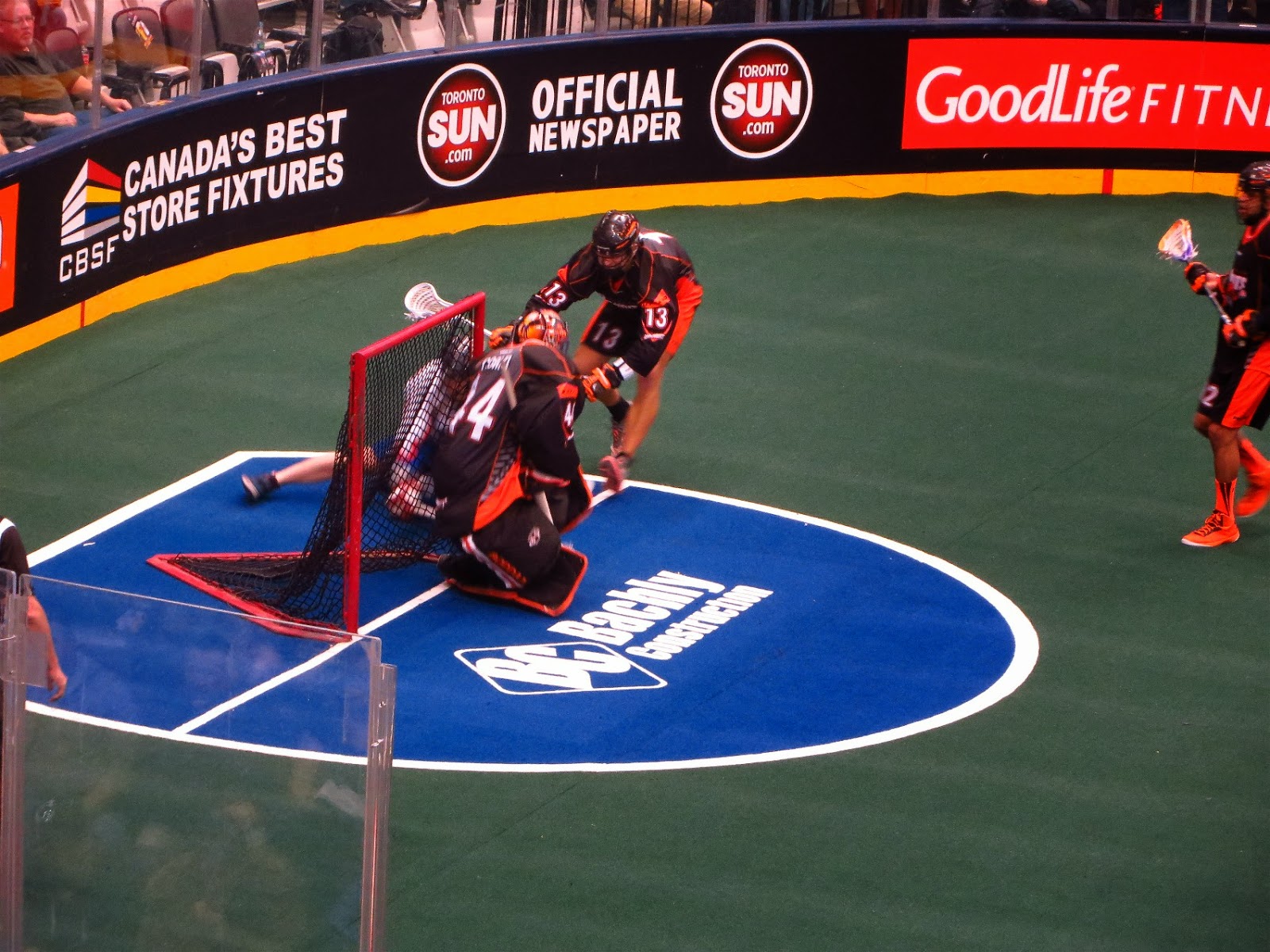 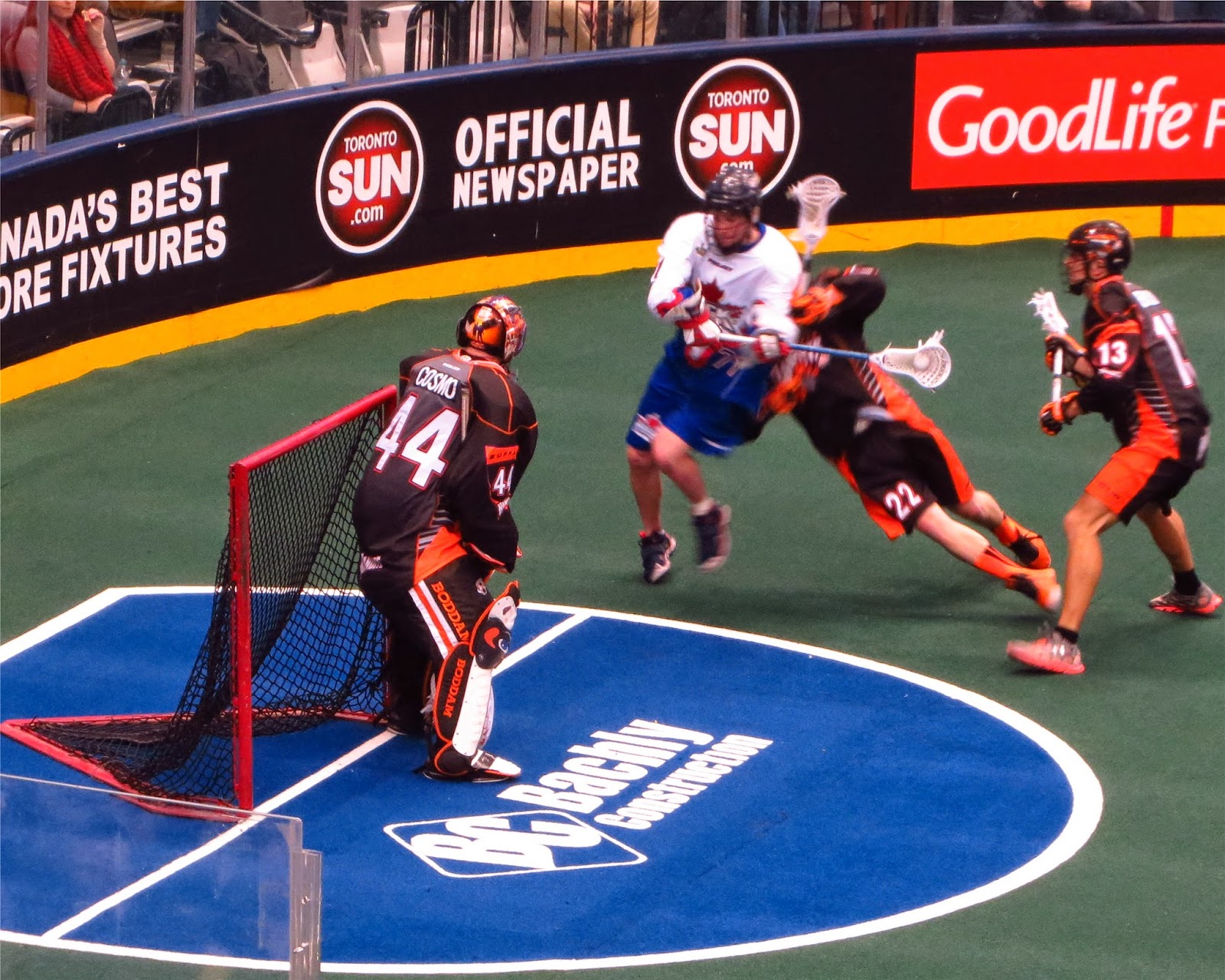 Kevin Ross may have been knocked on his head here but scored his second goal of the game in the process! 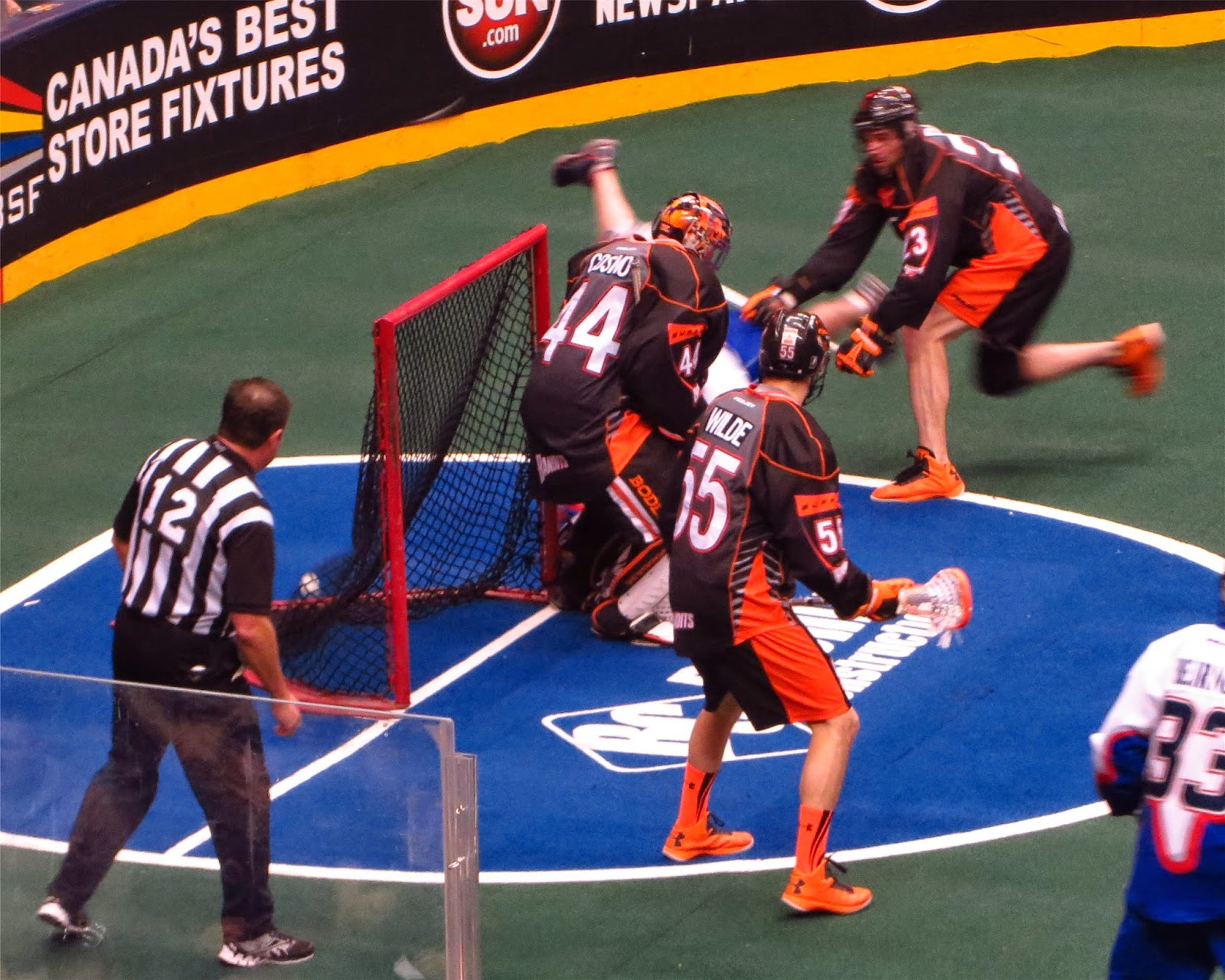 The third quarter ended 9-7. One final cheer from the cheerleaders who always put on a great show. 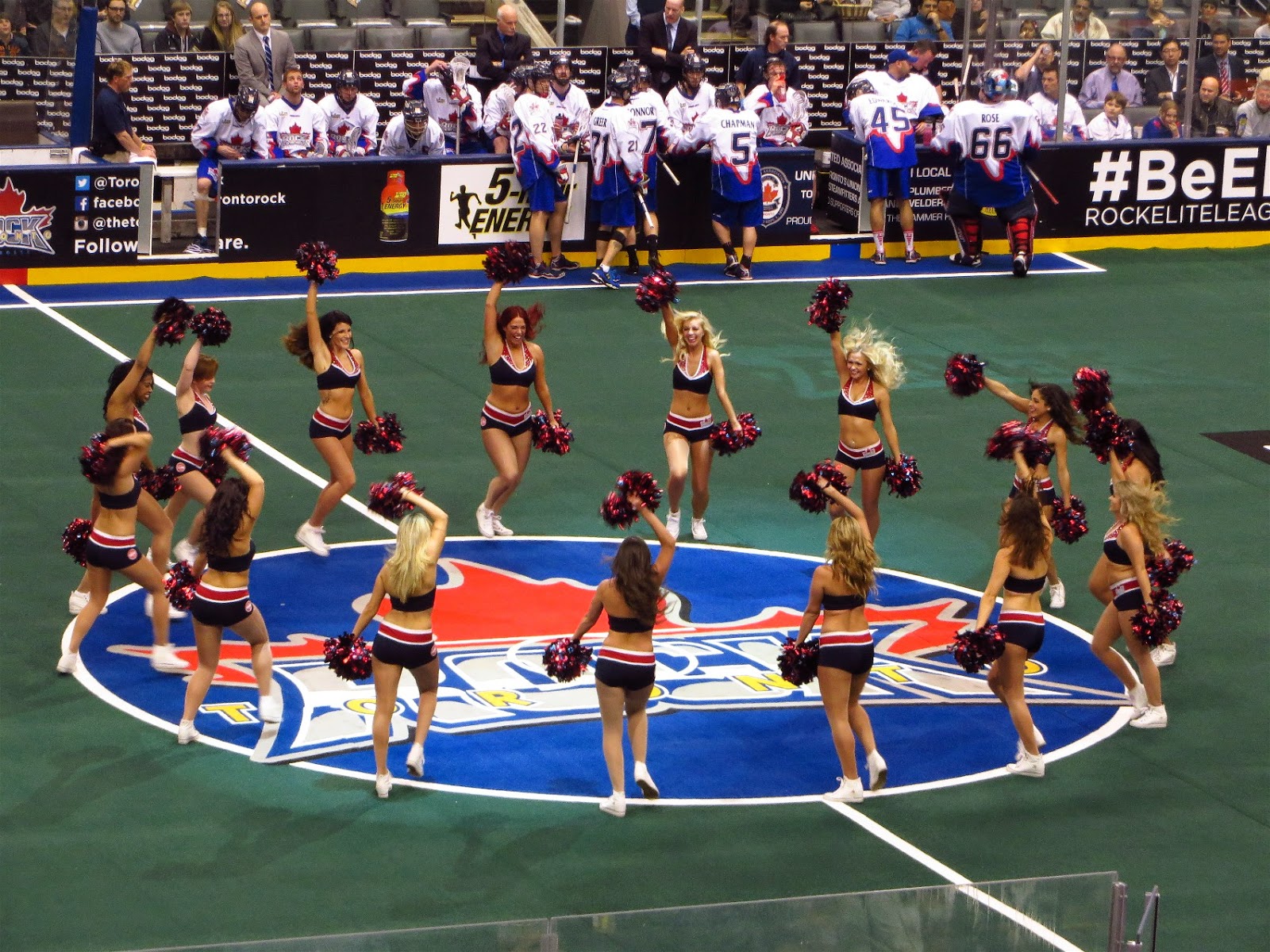 Toronto sports royalty Pinball Clemons was at the game cheering on the Rock. 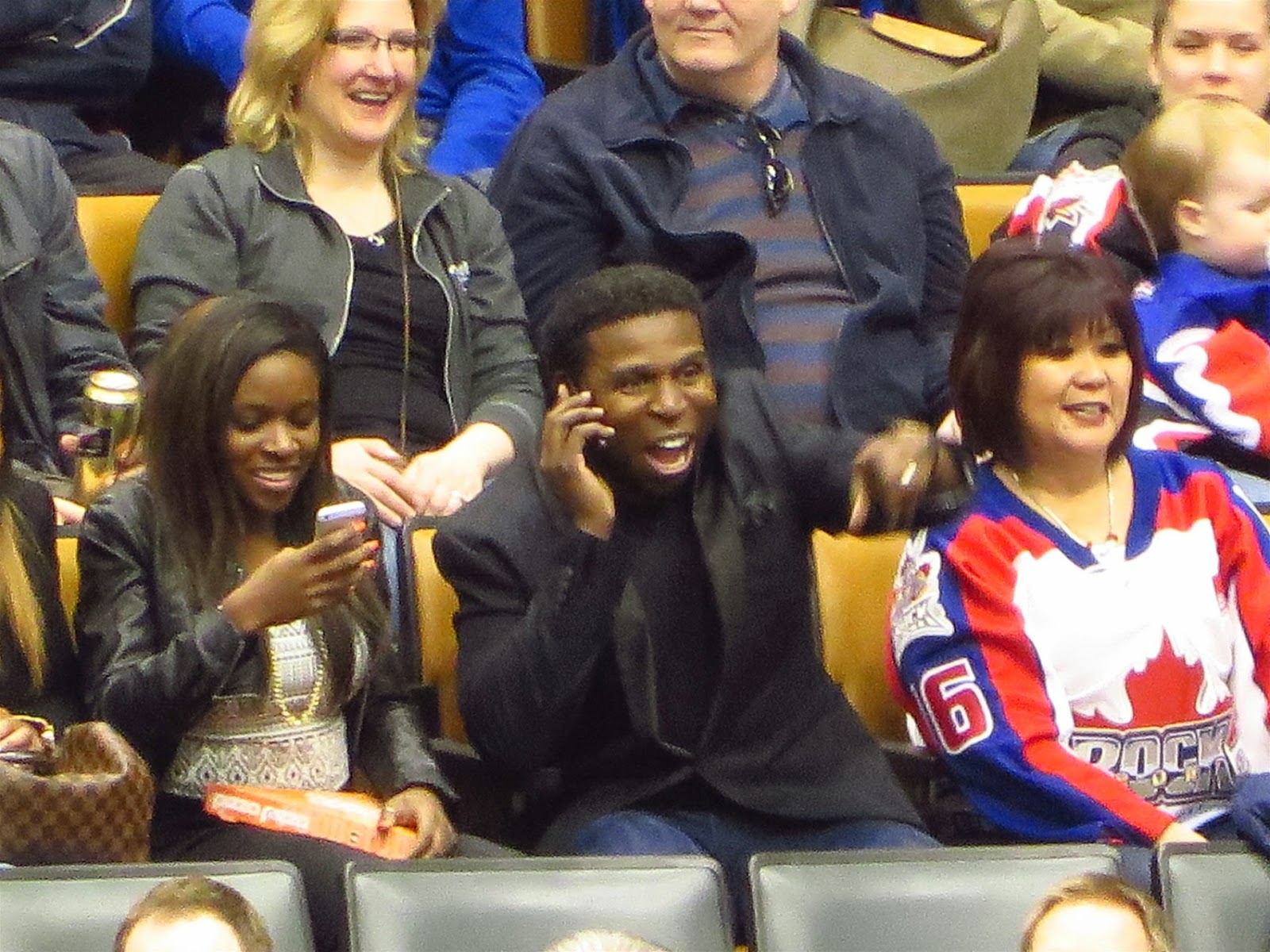 Toronto scored the first goal of the last quarter to take what looked like would be a commanding 10- 7 lead but Buffalo did not give up and scored the next two goals. With four minutes left, Toronto only led by a single goal. Nick Rose was sensational holding off the Bandits. 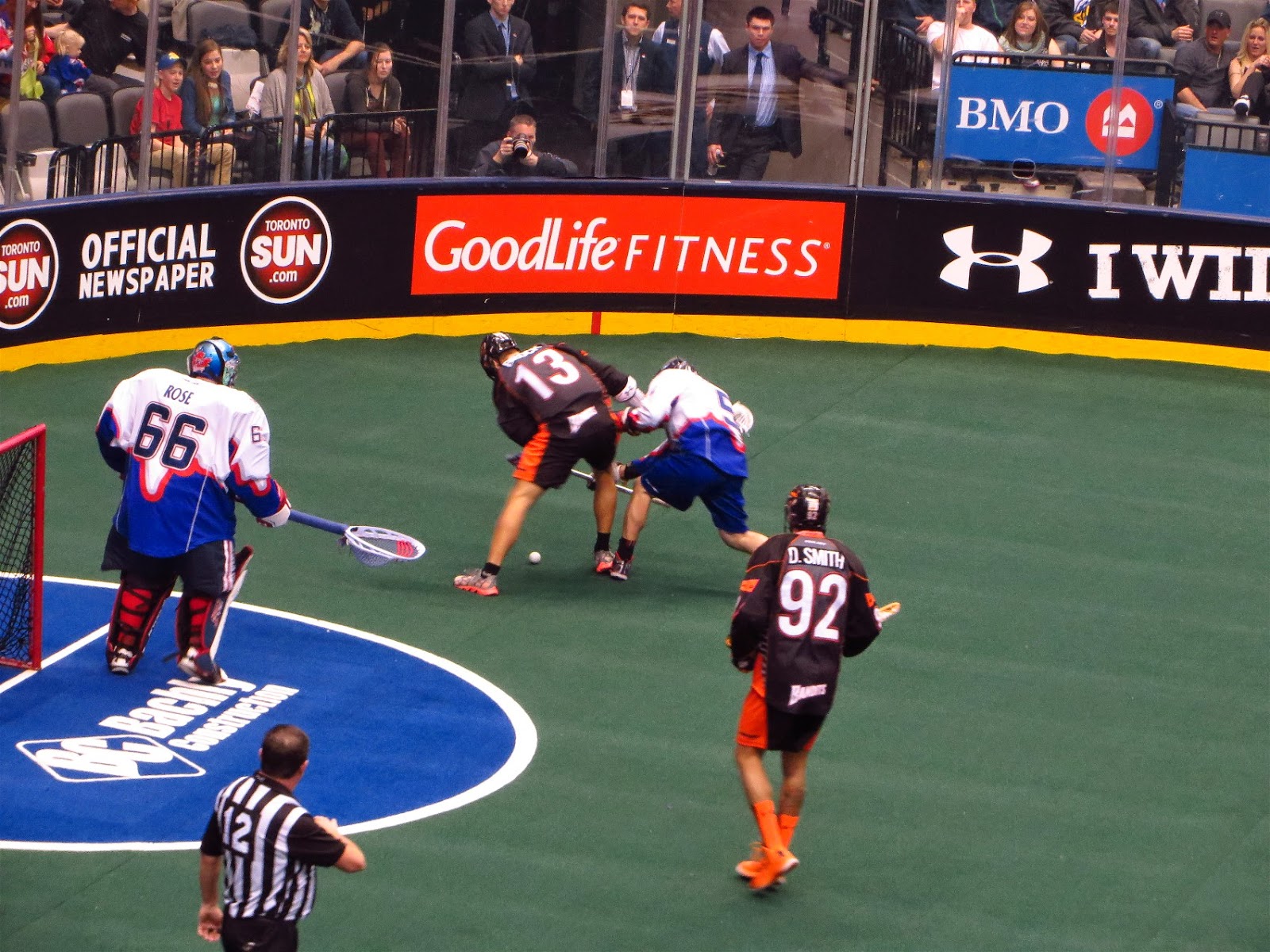 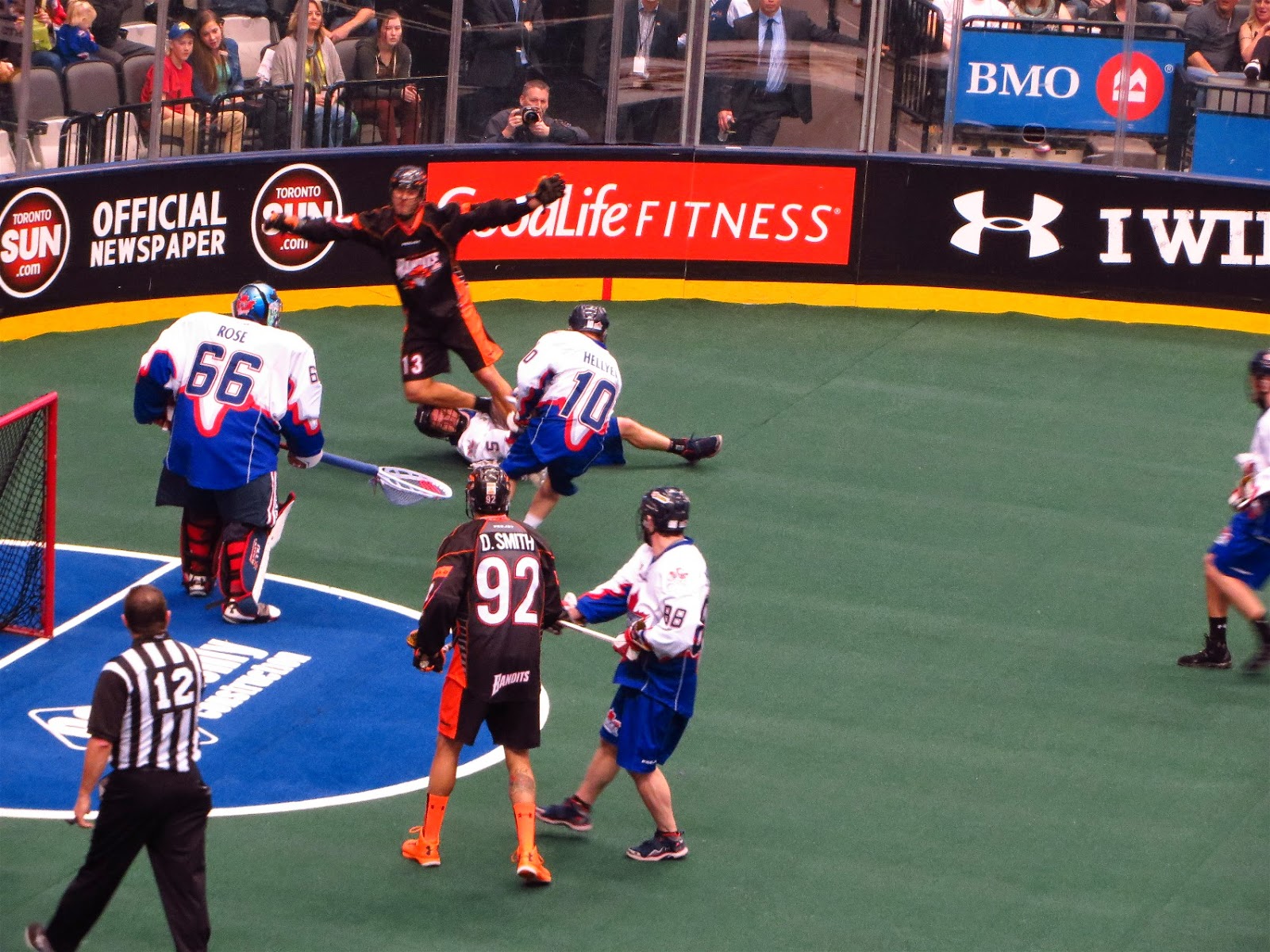 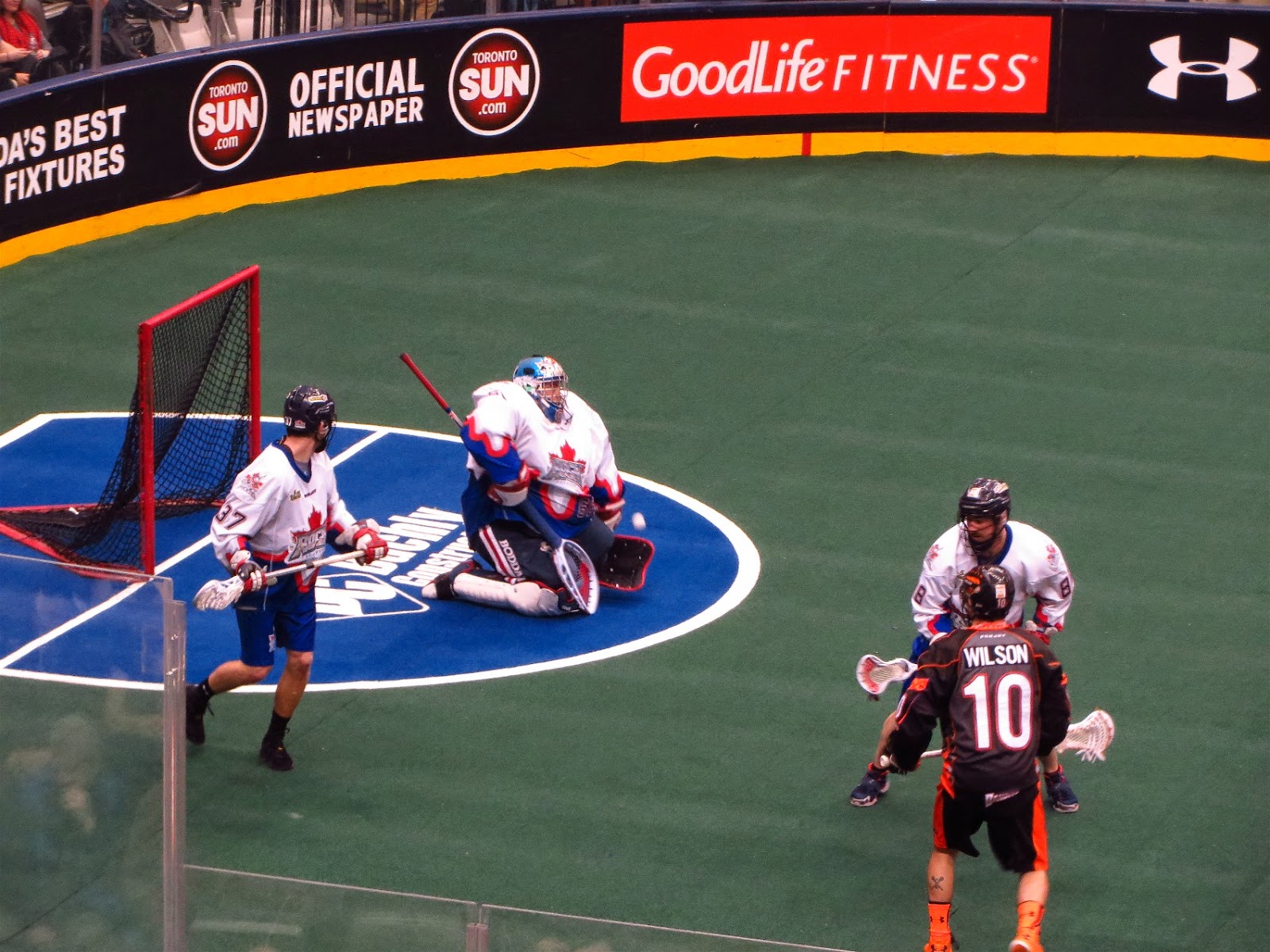 It was Kevin Ross again who gave the Rock some insurance with his third goal of the game and season. Buffalo in desperation pulled their goalie with a couple of minutes to go but Toronto put in two empty net goals to seal the win 13-9.

After the game, Toronto Rock captain, Colin Doyle, took the microphone to thank the fans as this was the final home game of the season. He said he hoped to see all us fans back at the ACC for the first round of the playoffs.

Toronto needs to beat the last place Buffalo Bandits while Buffalo needs to lose its final two games. They take on first place Rochester in a home and home series. It's quite possible Doyle and the boys will see us in a couple of weeks back at the ACC. Fingers crossed! 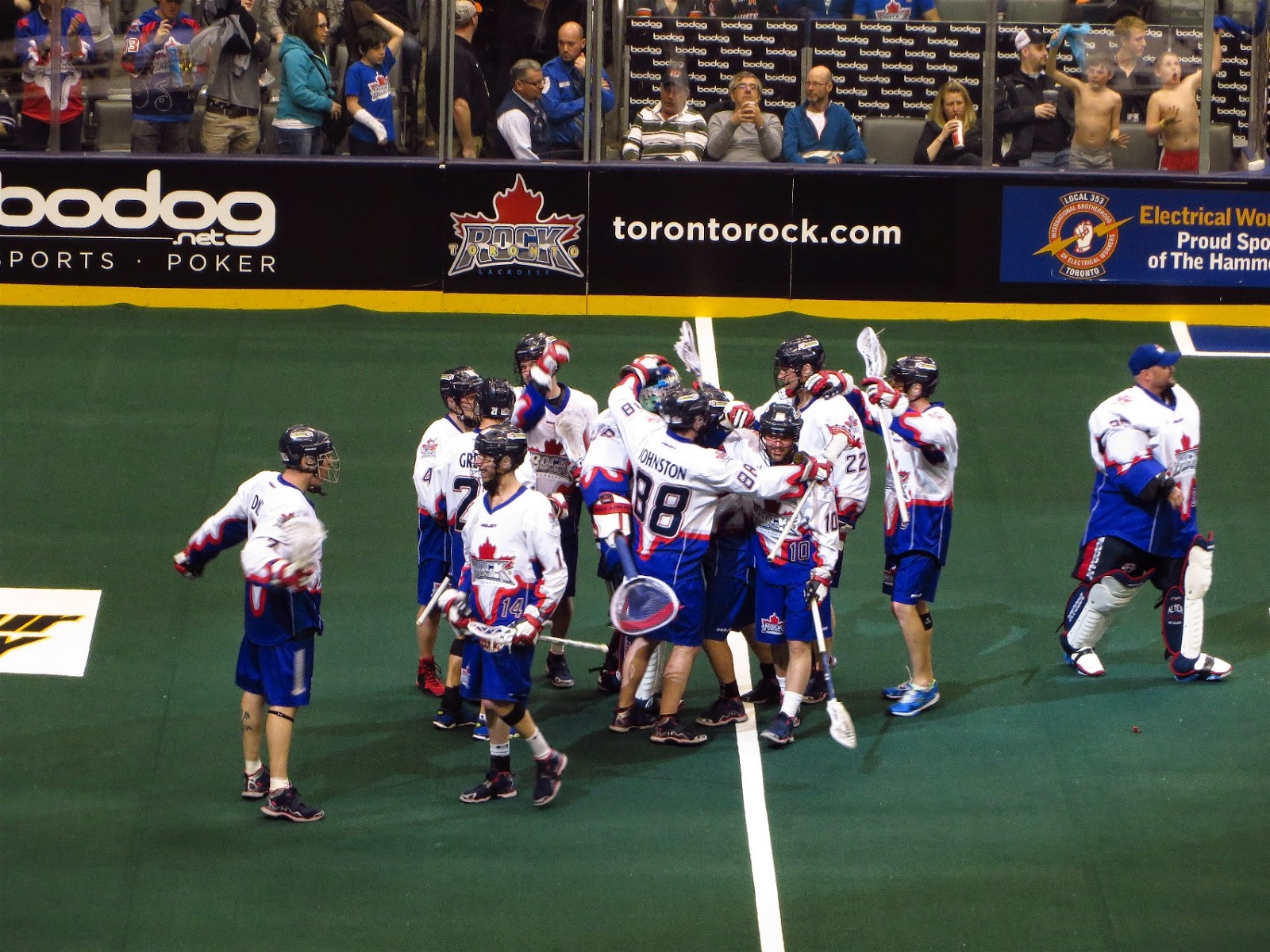 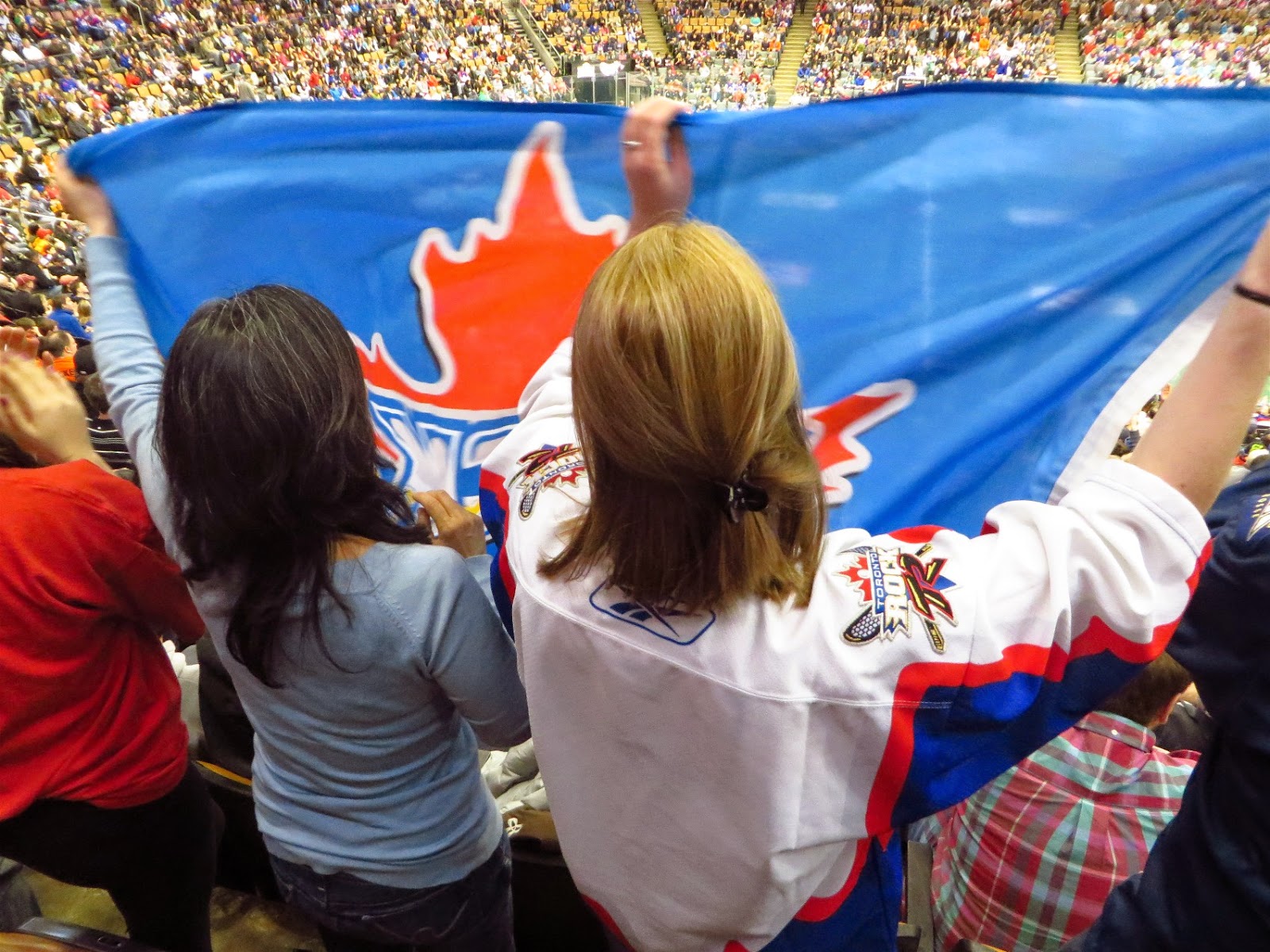 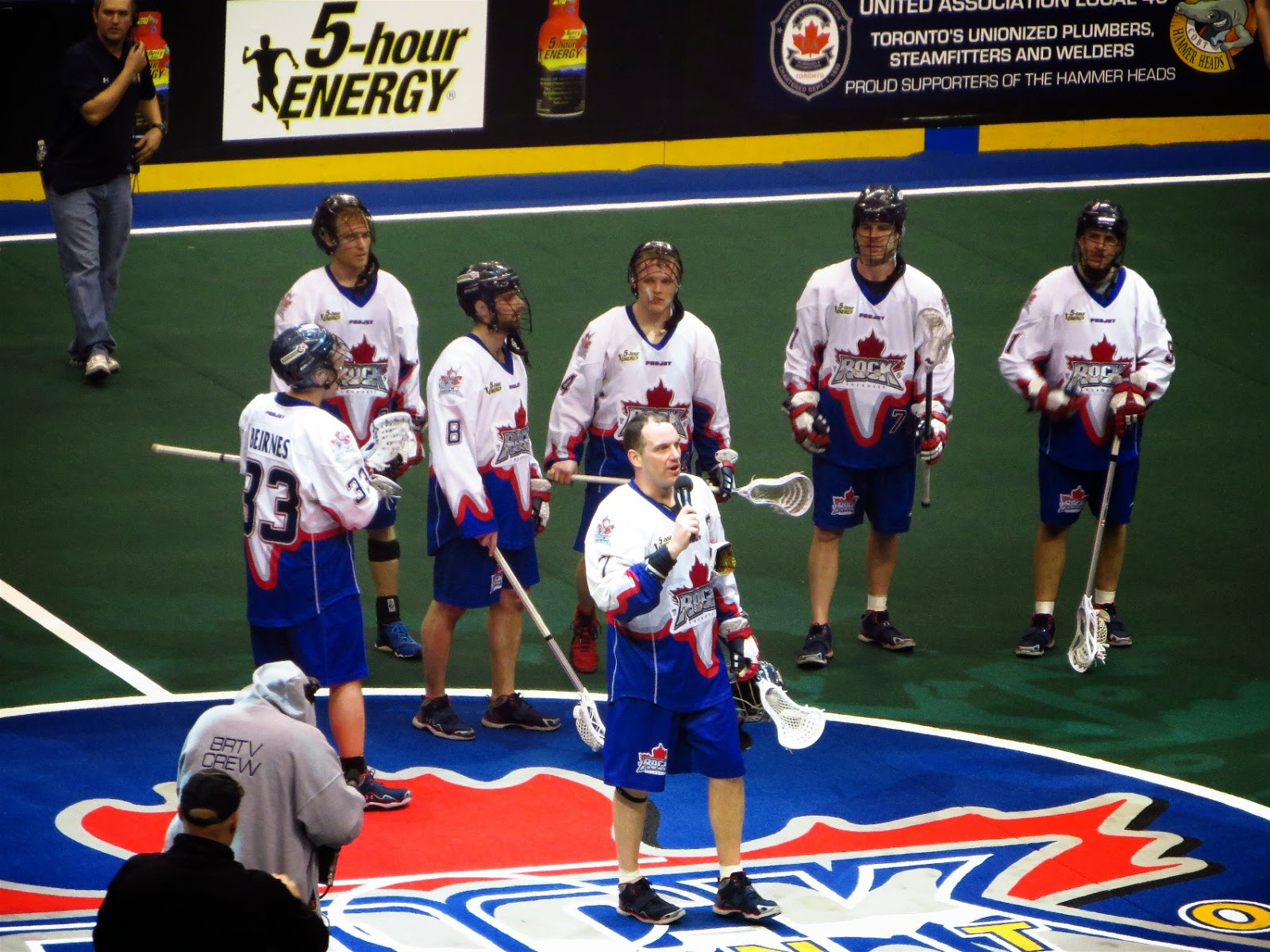 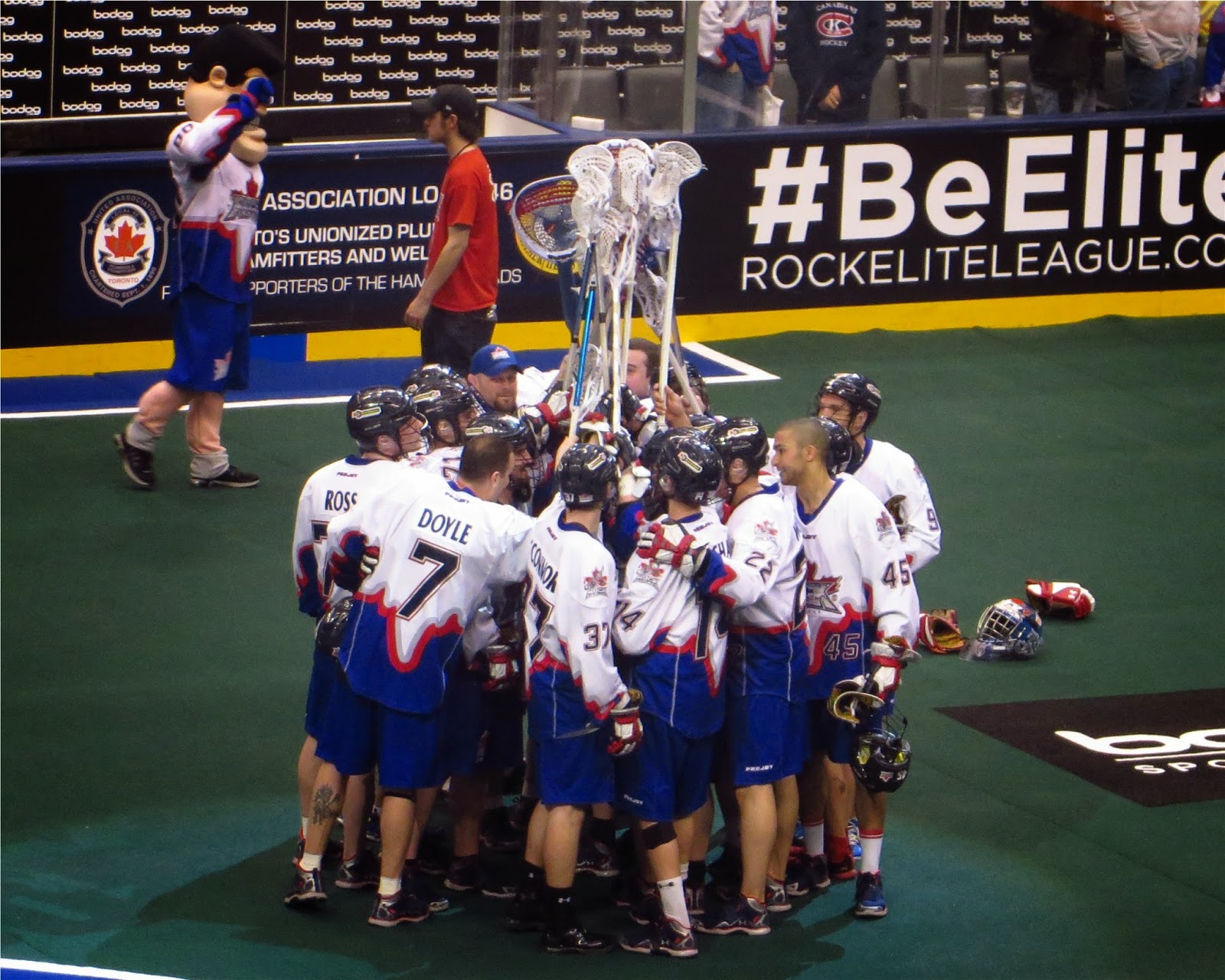