Beer of the Week - Svyturys Ekstra 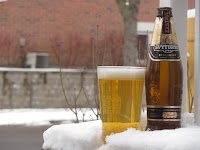 I thought it was interesting back in back in August of last year that the LCBO had a Lithuanian beer in stock. Of course, it became my Beer of the Week that week. So I was quite surprised this week to find that they also stock a second Lithuanian beer, Svyturys Ekstra.

It turns out that this brewery has been around a long time. Up until 1784, the town of Klaipeda, Lithuania, did not have its own brewery and instead imported German beer. Then J.W.Reincke opened up the first and very successful brewery. In 1883, the brewery won its first gold medal for one of their beers.

The brewery was taken over by the Nazis in World War II and was destroyed in 1945. In 1946, the brewery was rebuilt and now that Lithuania had independence the company

issued shares, most of which were bought by there own employees. In 1999, Carlsberg bought a controlling interest in the company and in 2008 took 100% ownership of the Svyturys.

Now 49% of all beer sold in Lithuania is Svyturys.

It is in 1995 that Svyturys (which means "lighthouse" in Lithuanian) came out with Ekstra. The beer has won gold and silver at the World Beer Cup and World Beer Championships back in 2000 and 2001.

The beer pours yellow in colour with a good white frothy head. As you can tell from the picture, it is very light and clear in colour. Even though I was outside, I could smell the floral hops jump off the beer as I poured it. It was surprising. There are a few lacings left on the inside of the glass as I sip. My first sip was seemed a little sweet which I wasn't expecting due to the aroma but I must have been mistaken as the second and third sips had a nice European style bitter lager finish.

It's not a bad beer at all! This is a much better beer than the Kalnapilis beer I had from Lithuania before! At $2.30 for a 500 ml bottle at the LCBO, it is a good deal too.

Beer of the Week

Labels: Beer of the week, Lithuania

I've got one of this beer art home but it doesn't say its expire date, how can I know if I still can drink it?