Beer of the Week - Kalnapilis Pilsner 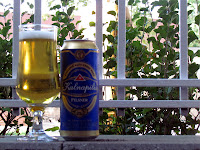 I admit that I have never been very good at geography, plus my skills or lack of them in that field was further confused by the break-up of the former Soviet Union which created some new nations.

So when I saw Kalnapilis Pilsner sitting on the shelf of my local LCBO and saw it was from Lithuania, I had to Google Map it to find out exactly where Lithuania was located.

Lithuania has quite the history. By 1795, the Russian Empire had annexed most of Lithuania which it held onto 'til the end of World War I, before Lithuania again became an independent country in 1918. In 1940, the Soviet Union came in and occupied the country but was quickly invaded and then held by Nazi Germany. By 1944, the Soviets drove out the Nazis and held onto Lithuania until 1990 when Lithuania became the very first Soviet Republic nation to declare Independence.

This played a bit of havoc with their beer industry. The Soviets were more concerned about vodka production in Lithuania.  So while new distilleries were opened and old ones upgraded, Lithuania's breweries chugged along with old outdated equipment.

That was except for Kalnapilis Brewery. Originally opened in 1902 by Albert Foight, the original name of the brewery was Bergschlössen which is German for "little castle on the hill". The name was changed later to Kalnapilis which means the same thing in Lithuanian. In the years from 1970 to 1990, Kalnapilis renovated their entire brewery.

Of course, once Lithuania became a free country, its industries became targets of takeovers. An article I read said that of the five major breweries, all but one had been taken over by multinationals but in further research found that one, Svyturys was taken over by Fosters Group. Baltic Beverages Holding Company took over Kalnapilis in 1994. It is said that when they did, some of the original recipes the company had were changed which may or may not be the case. In 2001, Royal Unibrew bought Kalnapilis and now the brewery has 25% of the Lithuanian beer market.

The beer pours a light golden colour with a white head which fell away quickly. There is a faint aroma but not a hoppy one. It is light tasting and a little sweet. There really is nothing special about this beer. I was expecting a nice European style pilsner but instead I found a beer that if blindfolded, I doubt if I could tell the difference between it, a Canadian or a Bud.

Certainly not a beer which would help identify a country and certainly one I would not bring home again.

Labels: Beer of the week, Lithuania