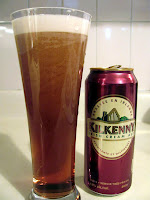 It is Superbowl weekend and my friend, Craig, is holding our Superbowl party at his place in Ajax.

This means I have to drive.

This means I have to be careful so I decided to pick up a light alcohol beer to have during the first part of the game. I decided on the 4.3% Kilkenny Irish Cream Ale.

This beer is brewed by Diagio the same company that makes Guinness, Harp and Smithwick's.  The brand name has been around since 1710 and is still brewed in Kilkenny at Ireland's oldest operating brewery. Kilkenny follows the same history as Smithwick's which I have featured before.

Kilkenny Irish Cream Ale comes in a 440ml can which contains the same widget used in Guinness to get a creamy smooth head. While Ireland is the main market for this beer, it turns out that Australia and Canada are its largest importers. I do not know how they are packed for sale in Ireland or Australia but here in Canada $10.95 buys a 4 pack

I am surprised I have not had one before as I have seen it at many pubs before, just have ordered something else instead.  It should be interesting to give it a try. 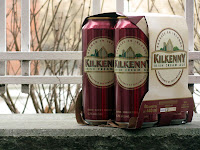 When the can is opened you can hear the widget go into action, the same sound as when a can of Guinness is opened.

The beer pours amber in colour with a very creamy head. The glass needs to sit for a minute or so as the "storm" of downward racing bubbles needs to settle. There is a nice aroma to this but I cannot place it. I am not sure if sipping the beer through the foam is what gives this ale its creaminess but it has a very creamy mouthfeel. I expected a sweeter beer but this is slightly bitter with a small dose of bitterness in the finish.

I really like this beer which proves once again as others have that a lighter alcohol beer can have lots of flavour. A beer for Sunday's when one has to work the next day.