Beer of the Week - The IPAs of Bellwoods Brewery 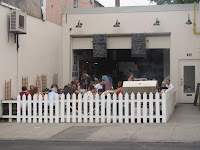 As it is the Canada Day long weekend, I thought I should do a Canadian beer.

In fact, I wanted to stay local and what could be more local for me than Bellwoods Brewery which is about a 10 minute walk away?

When I first heard that a brewery was opening up in my own neighborhood, I was excited. My hope was that they made great beer and a great IPA. I wasn't disappointed.

The brewery opened in April and Teena and I were at a tasting at the brewery the week before the opening. The beer was terrific!

Luke Pestl and Michael Clark used to work together at Amsterdam Brewery until they came up with the idea of opening up their own brewery. They took over a building that was an automotive shop by day, and art shop by night. Now, the building is a full time brewery and pub. 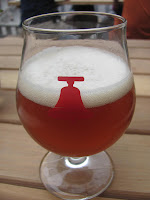 I first heard back in July 2011 that the brewery was going to open and kept a watchful eye on the building. They had hoped to be open by October but there were delays including having their brew house shipped up all the way from California.

Finally on April 1, they invited a large group of people in three different shifts for a free tasting. Teena and I were on that list. A week later, they opened their doors to the public and in May opened a large patio.

They planned to open a store on the north side of the brewery but the pub has been so successful it was hard to keep up production. On June 16, the brewery had it's first pop-up sale of bottles. I was there and there was a 20 minute lineup. This is a popular brewery. Their second pop-up sale was on Saturday but Teena and I were in Stratford and had to miss it.

My plan was to walk over, sit on the patio and have two of their IPAs for this Beer of the Week but I really didn't feel like going out today. Then I saw on their Facebook page that they were selling bottles again today so over I went and picked up few bottles to have in the safety and comfort of my own home.

Usually for the Beer of the Week, I love trying a new beer which I have never had before. Today, though, I am not in the mood for something new. I do not feel like experimenting with a new taste. I could have bought a Barrel Aged Lost River IPA or a Farmhouse IPA which uses saison yeast but I am not in the mood. I am not feeling adventurous.

So instead I came home with a few Lost River IPAs and some Witchshark Imperial IPAs. Both I have had before and enjoy, but never had them back-to-back to compare, so today I'll be doing just that. 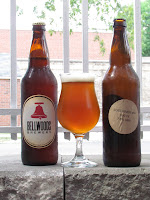 The beer pours a golden colour with a full white head. The aroma is citrusy; in fact, I can swear I smell grapefruit in this. Funny the different aroma's that hops can give off!

This is a good balanced American style IPA. Like most IPAs which I enjoy, this one does not hit you over the head with bitterness to start. Instead it actually seems to start a little sour with the full bitterness coming through in the finish. At 7.6% APV, there is no hint of alcohol burn at all, which is a little dangerous, as although this would not make a good session ale, I could have two or three of these!

Now it's time for the Witchshark Imperial IPA. 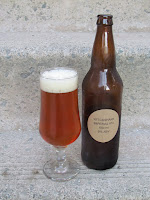 This seems a little more lively when I pour it into the glass. The colour is slightly darker than the Lost River, more of a deep golden shade. The head is full and thick and, although it has a citrusy aroma, there is not the defined "grapefruit" sense that I found in the first.

This is fun doing a back-to-back comparison.

I find this one to be more defined and experienced. More the grown-up, mature, big brother of the Lost River. Wonderfully balanced. There seems to be more malt in this and much more flavour. It does not have near the powerful bitter bite in the finish as the Lost River but, if this is even possible, the finish has a smooth bitterness to it. This one weighs in at 9% APV and there is no alcohol burn. Once again a fabulous beer.

Whenever a pop up sale comes again, I will be hauling home more of both of these. If I was on the patio, it would depend on my mood as to which one to have.

I am glad that Bellwoods Brewery came into our neighborhood. The beer is excellent, the patio is one of the best in the city, plus there is one more thing I love about the people here. Not only do they remember my name when I go but if Teena is not with me, ask about her by name. This is a skill that makes a client feel more than welcome.

Luke ... Michael .. keep up the great work and I'll be seeing you again! There are so many more beers there to try!