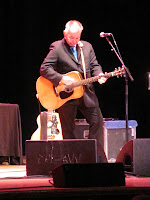 Tonight Teena and I saw John Prine at the best concert venue in Toronto, Massey Hall.

I had not even head of John Prine until I met Teena. I think it was four years ago when I went to my first John Prine concert at the University of Toronto Convocation Hall. I became a fan that night and was looking forward to this concert.

John did not disappoint.

Jimmy Rankin opened the show with a 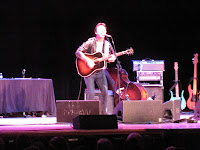 half hour of his music. Most of it were slow tunes and he finished up with one of the Rankin Family's greatest hits, You Feel The Same Way Too. It was a little too long and not as boppy, rockin' and fun as the one he did with his sisters.

After the break, John Prine took the stage.

His tunes are full of great lyrics, some funny, some clever, some sad. He was backed on the left by a guitarist who also played mandolin and harmonica and a bass fiddle player who also 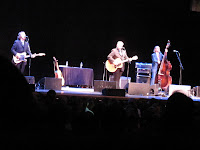 played guitar. About an hour into the show, his back-ups left the stage and Prine played alone and told some stories. I liked the line where he said, "They always leave the stage when it's time for me to do the hard stuff!"

The band came back for the last session and, for the encore, Jimmy Rankin joined John Prine on stage for the last rocking tune.

It was a great concert played in a great venue. Reminds me I have to get some more Prine on my iPOD.

***
Jimmy Rankin and John Prine for the finale. 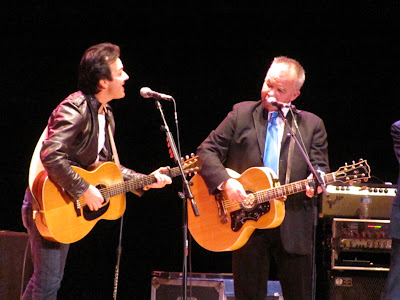 Gotta love a bass fiddle. The bass fiddle player had big hand and long fingers so could really "slap the bass". 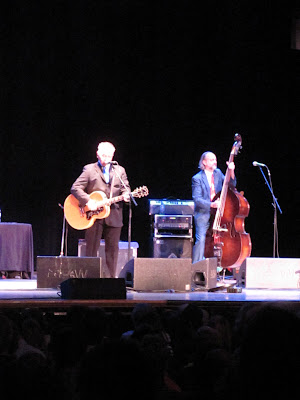 An artsy picture? No, this is what happens when you press the button to shoot the picture, then decide to turn the camera as you realized you wanted the camera on it's side instead. Actually it is a cool shot! 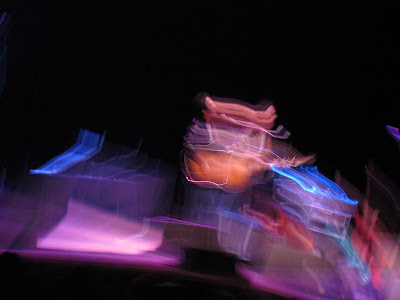 I just saw him at the Hardly Strictly Bluegrass festival in San Francisco a few weeks back and loved how great he sounded. Flew home on the 18th and did not know he was playing last Friday. Argh! Was at the Convocation Hall show a few years back too. What a gem this man is! Thanks for such a wonderful review.