Being a Fashion Leader! 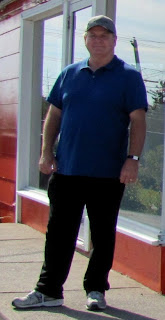 When Teena and I were in Cape Breton a couple of weeks ago, there was a mix up with my bag and as a result I had no clothes for the week. Teena suggested Walmart but there was a Loblaws beside it with a Joe Fresh in it. Joe Fresh is a line of clothing sold through Loblaws. The prices were right, the styles suited me, so I went on a shopping spree.

For the rest of the week, I was everything Joe Fresh.

This week in Toronto is LG Fashion Week and on the list of designers to take show off their style to the masses was none other than Joe Fresh! Last night Joe Fresh Styles hit the runway. The audience was full of big names, (see the Toronto Life article) and it was very well received.

"It was so full that people littered the steps of the bleachers to catch a glimpse of the show. Joe was wowing everyone, including style scribe Sarah Nicole Prickett, who was overheard saying, “I’d buy this shit,"

We saw Joe orange in many forms, like contrasting collars, men’s slacks and on the soles of shoes (is orange the new brick sole?), but what we loved the most was the use of patterns and textures on shirts, pants, blazers and dresses—it felt like a sense of humour was being injected into Toronto menswear, which for years has been all too consistent."

So once again it seems, I am not just in style. I am style!
Posted by Swordsman at 16:58