Book: The China Wall: The Timeless Legend of Johnny Bower 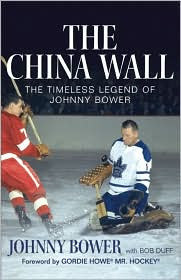 I rarely ever watch hockey these days but growing up in the 60s I was a huge hockey fan. I ate slept and breathed hockey and lived and died with the Toronto Maple Leafs.

Even better for me was that the 60s were the glory years for the Leafs and their fans ... four Stanley Cups, Armstrong, Kelly, Shack, Mahovlich, that great defense of Baun, Brewer, Stanley and Horton, and, of course, my favorite goalie of all time, Johnny Bower.

When I saw this book of the shelf at the book store, I knew it was a must read. I was disappointed to find that it was a biography as I find most not very good. I usually come away disappointed but not this time.

He started playing in the AHL in 1945 and toiled there until 1954, when he spent a year with the New York Rangers in the NHL where he set a team record for most wins by a rookie goalie. Then for some reason, he was sent back to the AHL. In 1958, at 33 years old, he was picked up by Punch Imlach to play for Toronto and then the good times started to roll for him and the Leafs. He played in the NHL until he was 45 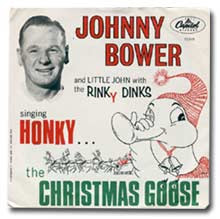 He tells his story very well. He comes through as a humble person, not scared to speak of the highlights of his very career and life, but does not wave the banner in a bragging manner that I find in most autobiographies. He is appreciative of the chances he was given, the advice he received.

I love the chapter that tells the story of how he was chosen to sing Honky, the Christmas Goose back in 1965. It is quite comical. Interesting to note that he sold over 40,000 records and at the time was biggest selling Canadian record up to that time. You can listen to it here.

I have never met the man but know he is one of the most well-respected people in Toronto. He works hard for different charities and I have heard how he is always there for the kids and fans. I can feel that in this book. Toronto is lucky to have had him wear the Leaf uniform and lead us to four Stanley Cups and equally lucky he decided to stay and be a great citizen to this great city.

This book is definitely worth reading.

Here is a short 1 minute tribute, showing many highlights of his play in the NHL. It too is worth taking look at.