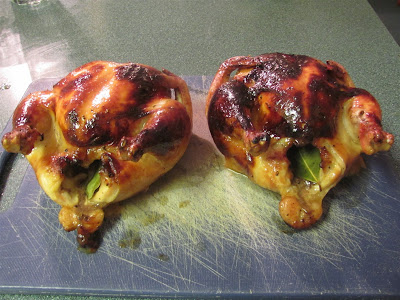 Teena and I do not have very many Christmas traditions but one is Cornish Hens for Christmas Dinner.

We have done it a few different ways in the past and tonight I tried baking them with a Grand Marnier glaze. I went through dozens of recipes and combined a few of them together and here is what I ended up with.

Combine orange juice, honey, and 1/4 cup of the Grand Marnier in a small saucepan. Bring to a boil, uncovered, over medium-high heat. Reduce heat to medium and simmer until the liquid is reduced to about a third of what you started with.

Turn off the heat and whisk in each cube of butter separately, only adding another cube when the first is completely melted in. Once this is completed, stir in the remaining 1/2 cup of Grand Marnier. Season the inside of each bird with some salt and pepper and put a bay leaf inside of each. Then spoon over some of the sauce. 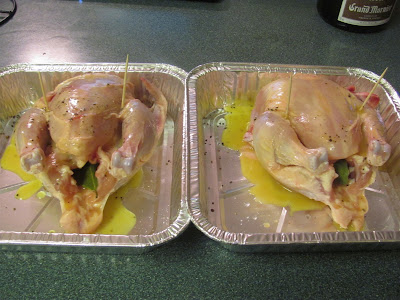 I used separate aluminum trays so cleanup would be easier. I covered them with tin foil and used the toothpicks to tent the aluminum foil over the birds.

The oven was preheated to 400F when the birds were placed in. I basted the birds every 10 minutes throughout. After 40 minutes, I removed the foil, reduced the oven to 350F and let the birds cook uncovered, still basting every ten minutes.

Thirty minutes later, the Cornish Hens were done. I had cooked up some prepackaged rice ( Uncle Ben's Fast and Fancy Fine Herb Wild).

I was very pleased with how tender the meat was throughout. The skin did not crisp up how I would like it to but the Grand Marnier glaze did penetrate the flavour of the meat and was delicious.

How can you tell that a meal is a great success?  No leftovers! Yes, this is a recipe which I would do again. 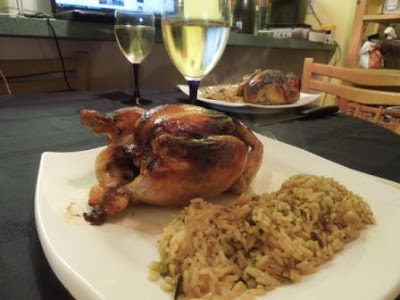