Recently Teena was in Winnipeg and brought me back a lot of local beer to try. I think she likes me.

In doing some research, I found that Fort Garry Brewing does have an interesting story that goes back 80 years.

Fort Garry Brewery was originally opened in Winnipeg in 1930 by B.W. Hoeschen selling two brands of beer. Frontier Beer won "Best in Class" in a beer competition in England against other Commonwealth breweries. In 1960, Fort Gary was sold to Molson's and in June, the name was incorporated as Molson's Fort Garry Brewing. That did not last long as Molson merged with Carling O'Keefe in 1990 and closed the facility.

In 1994, another Hoeschen came on the scene. Richard is the great-great grandson of B.W. and "resurrected" the brewery under the Fort Garry name. In fact, the brewery claims that their Frontier Pilsner, which they brew now, is from the original recipe for the Frontier Pilsner brewed back when the brewery first opened in 1930. The demand was good and he had to move the brewery to a large 25,000 square foot facility to keep up with present demand, and future expectations.

Richard passed away in 2002 but the brewery lived on and was quite popular in Manitoba. In 2006, the President of Russell Brewing in BC, Andrew Harris, saw a similarity in his brewery and Fort Garry and in 2007, Fort Garry amalgamated with Russell Brewing, which still brews under the Fort Garry name. 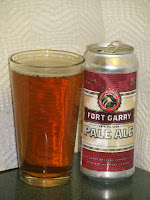 ught me home 2 of their brands, the Fort Garry dark, which was the first beer Andrew Harris tried which peaked his interest, and Fort Garry Pale Ale.

I decided to try the Pale Ale first as from the website tasting notes the Dark seems a more fuller tasting beer and would likely overpower the Pale Ale if I had it first.

The Pale ale poured with nice white head and is amber in colour. As I sipped, there were traces of lacings down the side of the glass. It is a little watery and weak in taste and slightly sour in the finish. This seems to beer a beer brewed more for the beer drinker who enjoys more of t 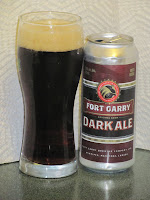 he big brewery style beer and is really not what I look for in a craft beer.

The Dark Ale poured with a much better head which seemed to linger. It is very dark brown in colour with a mild aroma. It too is a little watery but tasty. There is a coffee flavour in the taste, not strong but is there. The flavours all seem to finish quickly. Nothing is overpowering but it is an OK beer. I was hoping for something a little more substantial but it is a nice drinkable beer.

There is nothing bad with either beer but, as I said before, they are not really what I look for in a craft brewery beer.
Posted by Swordsman at 18:59

Labels: Beer of the week, Manitoba