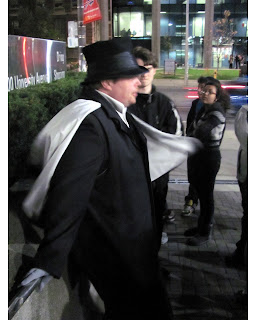 Teena, myself, and friends Shawna and Yevette went on "The Haunted Streets of Downtown Toronto" with Richard of Muddy York Walking Tours.

We have been on a few walks with him before and they are always very interesting. This one, of course, focused on haunted places in downtown Toronto. The stories were all very down to earth and told very well.

Two I found quite intriguing and sure enough, if you Goggle them, they are not just stories made up by Richard.

The first was the ghost of Celeste in the former McLaughlin Planetarium beside the Royal Ontario Museum. "the ghost of the Planetarium is an unknown child in turn of the century garb with a head of blond ringlet curls. Named Celeste by the staff, the child is said to have sat in the theatre and watched the shows.

Repeated sightings of the girl have been told over time, and Celeste always disappears when approached. Upon the opening of the Children’s Own Museum, tales of Celeste returned – this time as an active child – throwing toys from shelves and disrupting exhibits. Though Celeste’s true identity may never be known, tour guide Richard Fiennes-Clinton theorizes that Celeste was from a time in the late 1800’s, when the area was primarily a wealthy residential neighbourhood. Clinton goes on to say that her described appearance – her clothing, hairstyle – is consistent with this theory, and that she perhaps died at a young age from cholera or a similar affliction."

There are still sightings and strange happenings that suggest that since the Children's Museum closed, she is in fact becoming lonely.

The second was told in Queens Park. Perfect timing too because as Richard was telli 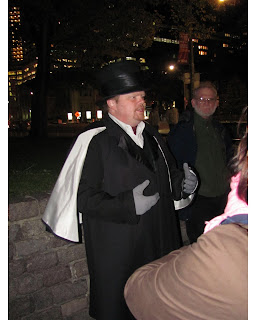 ng us the story, the laneway light above us went out. Great timing.

It was about how the Ontario Legislative Building, which is built on the site of an old asylum, has a tunnel leading across the street fro members to use. Problem is, many who use the tunnel have come across a decaying hanging body inside and many refuse to use the tunnel because of it.

The tour ended at Mackenzie House, the former home of Toronto's first mayor, William Lyon Mackenzie, an angry man who only lasted a year being mayor and later led the rebel forces in the 1837 Upper Canada Rebellion. The ghost of Mackenzie King has been seen for years inside. When we had our pictures taken with Richard in front of the front door, Matt snapped the first and said there was something strange over Richard. He then took a second shot. Sure enough, in the first shot, shown below, an orb is over Richards head.

An orb is supposed to be the energy of the dead in haunted areas. Some say they are just dust particles lit up by the flash. Why was it over Richard our guide, who does not speak well of Mr Mackenzie?

Untouched photo. Me, Shawna, Richard, Teena, Yvette and the orb! 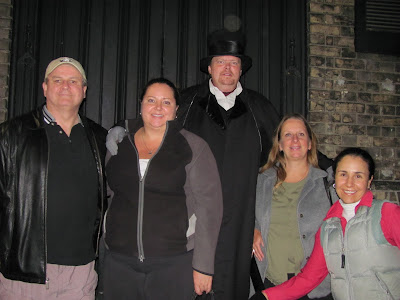