Beer of the Week - Church-Key Scarlett Pilsner and Black IPA 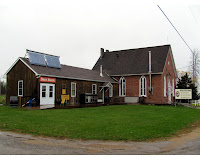 This past weekend I was in a fencing tournament in Kingston, and afterwards went for a visit and stayed the night at my sister's place. Judy and Doug made sure I was well looked after. Thanks guys!

The next morning I got up to head home but Church-Key Brewery was just a slight detour out of the way. After many years, I stopped in for the first time. I had written about Church-Key before at Christmas as Doug and Judy had given me a six pack of their Northumberland Ale, which I enjoyed. Now I had a chance to drop into the brewery and find something different.

The brewery is indeed inside an old church on top of a hill. Very scenic and quaint. T 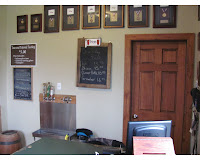 he store was very small but really is all that is needed. Teeshirts, glasses, and. of course, beer were for sale. I had hoped to get some of their West Coast Pale Ale but it would not be ready 'til Tuesday. Hopefully they have some on my next visit.

Some beer they sell in six packs, others in 650 ml bottles which they call a "dinner bottle" and. of course, the growler. Their six packs were a little costly at $13.25 but I found the dinner bottles way overpriced costing $10.25 a bottle. At $16.25, the growlers look costly but that includes deposit. Still I walked out with 2 Dinner bottles, one a Black IPA and a Scarlett Pilsner. Hmmm, both sound interesting. 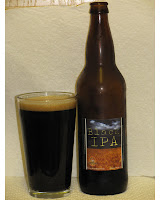 re a great deal. $5 for a tour, 4 samples and a take-away sample glass. I was late getting on the road, though, so just didn't have the time. Damn!

I did have a sample of their Holy Smoke. It was nice and malty with a very slight smoke aroma and flavour. It would be one I would enjoy one of, now and then.

Once home, I put the bottles in the fridge to give them a bit of a chill. After a few hours, it was time to taste.

First up was the Black IPA. I had not had one before. It definitely poured black in colour and the aroma was very stout like with tones of coffee coming through. It tasted like a more bitter stout. Where a stout will get its bitterness from the toasted 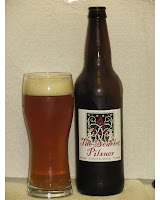 malt, there was more here, which must have come from extra hops. The alcohol comes in at 7%. It was very nice, but to me was a stout and not worth the $10.25.

The Scarlett Pilsner was up next. This is a spiced, unfiltered pilsner which poured amber in colour. Its fragrance had slight hoppiness and spice. The spice is evident in the taste too but does not take over the flavour. It is very subtle and very nice. Something different and very well done.

I am looking forward to returning to the brewery next time I'm in the area. Their beer is quite good. I just would not get the overpriced Dinner bottle size again.
Posted by Swordsman at 19:18