Fencing at the K-Town Veteran Challenge 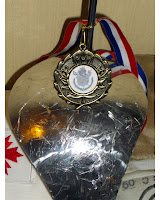 Yesterday I arose early for the 2 3/4 hour drive to Kingston for the first ever K-Town Veteran Challenge.

It is a three weapon event with medals won for each weapon and also for the best all round fencer in all weapons.

I only entered in the Saturday events for Foil and my #1 weapon, the Sabre. Sunday being Mother's Day, I skipped the Epee to take my mom out for brunch in Belleville.

This is only the third time I have fenced foil and I definitely am not as comfortable with it as I am with a sabre in hand, but didn't do bad. I finished 12th out of 15, my first non-last finish of my brief foil career and gave some experienced fencers some rough times. I also got my butt kicked by a few.

After the round of pooles, we broke for a potluck lunch featuring an excellent turkey chili, pasta salads, a fruit tray, buns, veggies, beer and wine. I didn't want to overload so I stuck to the pasta and fruit and had a glass of white wine with it. I had hoped that whomever I was to meet in the next round would eat and drink too much, get sleepy and be easier. That did not hap 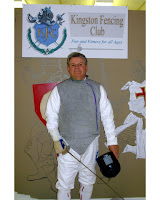 pen and Roch knocked me out of the foil event by a 10-4 score.

Next up was the Sabre competition and it felt good to get back into something familiar gear. I felt very much at home with my favorite sabre in hand. I started off, though, fencing very sloppy, making bad, ill timed attacks and even being caught three times crossing over with my feet, which is not allowed in sabre.

I stood back after and went over in my mind as to what was going wrong. I should have been able to win those first two matches. Then experience kicked in and 4 years of excellent coaching kicked in.

I knew what to do.

Shorten my steps, stay just out of reach of my opponent until I attack and, when I do attack, lunge explosively. Then everything started going my way and I won the next five matches in the poole.

I was feeling good going into the DEs (direct elimination).

I met Paul in the first DE and won 10-4. Then it got tough. Mark has a very different fencing style that can throw me off but I have learned how to counter it. After taking an early lead, he came back

and, in a match to 10 points, I was down 9-8. It was time to get really serious and dig deep. I was not going to lose this. Concentrating again on short uneven steps, watching my distance so as to stay out the way of his excellent counter attack and being patient until it was the perfect time for an attack, I took the next 2 points and won a nail biter 10-9.

The gold medal match was not much easier. Robert and I started even and then he took a short lead before again. I gave my head a shake and took my game to him. My game is about the attack and I had it working. In the end, I had a 10-7 victory and a Gold medal. 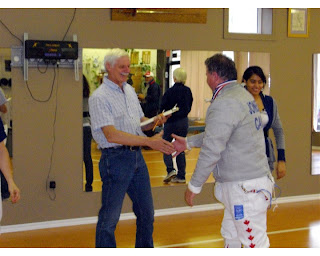 Mark and I share a well earned beer after the Sabre competition. 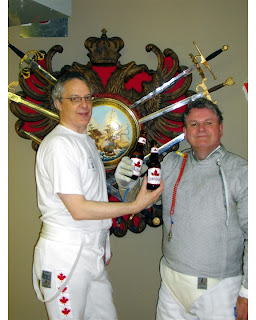 The buffet was excellent ... too bad I had to have some discipline. 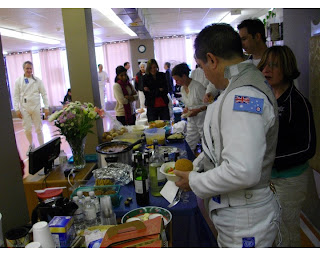 The cast of characters for the Foil Competition. 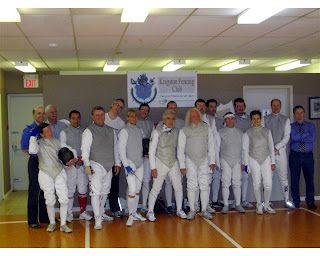