From Beer to There - English Ales 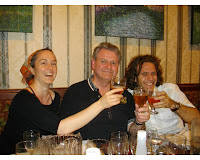 Last night was a great class, perhaps my favorite yet, and they have all been great.

Mirella from Beerology took us to the Granite Brewery for a class on English ales, as this is the style that is brewed at this brewpub.

After learning about the different style of beers brewed in the U.K., we were taken on a tour of the brewery section by the owner and brewer, Ron Keefe. Originally from Halifax, he and his brother specifically studied English-style ales before opening their pubs, one in Halifax and the other in Toronto. 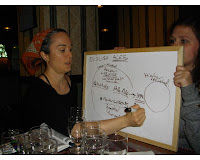 The brewery uses two open top fermentors, with the yeast working on top of the batch, producing the alcohol and protecting the beer. Ron drained off some of the one day old "Hopping Mad Ale", which is one of my favorites, for us to taste. He said it would taste bad and was likely around 2% alcohol but, although it still needed work, was not bad. Shows how much I love this beer!

After the tour, it was back to the restaurant area for the tasting.

First up was an interesting comparison. Granite Best Bitter from the cask was poured along side the cask version of the same beer. Cask conditioned ale is beer that is brewed from traditional ingredients and matured in the cask from which it is served. This means that it is fresh and unfiltered and 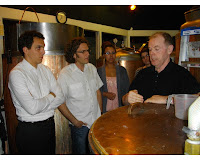 therefore has a unique flavour.

The class was divided as to which they liked better. I liked the cask better. First I tasted the keg version, which I enjoyed, then the cask, which seemed tastier, then back to the keg version which now seemed to have a lot less flavour. Some in the class missed the carbonation in the cask version and preferred the keg.

Then came out the Old Peculiar, a wonderful, tasty but less hoppy ale. We were to finish with a Gin Lane Ale, which is a barley wine with a 9% APV. This is allowed to age longer so the 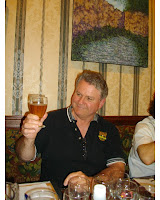 yeast works more to create not only more alcohol but a wonderful fruity aroma and flavour. Only brewed in the winter, Ron had set aside a growler just for our class. Thanks, Ron! It was fabulous!

Mirella decided that we weren't finished and that the IPA on cask was not to be missed. It was lighter in colour than I expected but had a nice floral hoppy aroma and a wonderful hoppy bitterness throughout. I love IPAs and this one's near the top of my list. Great idea, Mirella.

Sadly it was time to go home, but I did not go home empty. A growler of Hopping Mad came home with me. 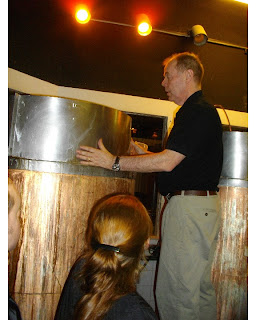 Fermenting wort after one day. 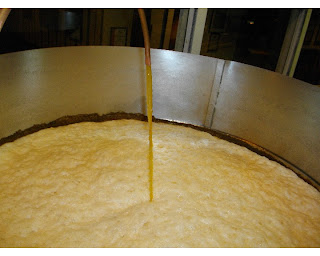 Fermenting wort after 3 days. The yeast sure looks different! 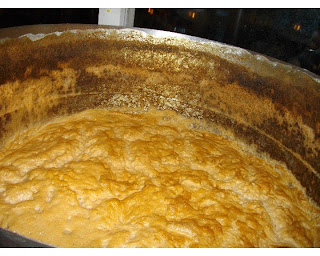 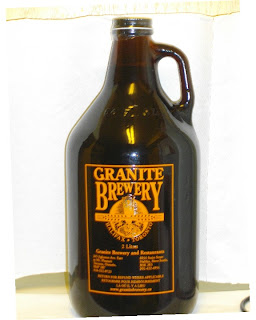