If an Egyptian Cannot Speak English by Noor Naga 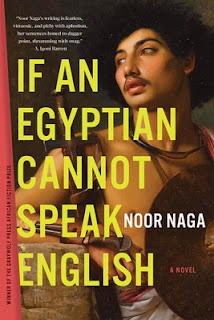 I just finished reading the Giller short-listed novel, If an Egyptian Cannot Speak English by author Noor Naga.
In the aftermath of the Arab Spring, an Egyptian American woman and a man from the village of Shobrakheit meet at a café in Cairo. He was a photographer of the revolution, but now finds himself unemployed and addicted to cocaine, living in a rooftop shack. She is a nostalgic daughter of immigrants “returning” to a country she’s never been to before, teaching English and living in a light-filled flat with balconies on all sides. They fall in love and he moves in. But soon their desire—for one another, for the selves they want to become through the other—takes a violent turn that neither of them expected.
This is a uniquely written novel about a destructive relationship between a man and a woman. The story is told from two different points of view. The first is a woman, who's name is not given. She was born in Egypt, grew up and was educated in the U.S. before moving back to Cairo. The other is an unnamed boy who grew up in a small impoverished Egyptian village.
I found it confusing at first, as the dialogue flips back and forth, and there are times I had to really a few paragraphs to know who was speaking but after 20 or so pages, I became familiar with the flow.
Throughout, I found the story interesting and wanted to keep reading. It reads differently from anything else I have ever read and part three really twists the readers imagination. Not for every taste, but a book I enjoyed.
Posted by Swordsman at 13:33