Stumptown Vol. 4: The Case of a Cup of Joe 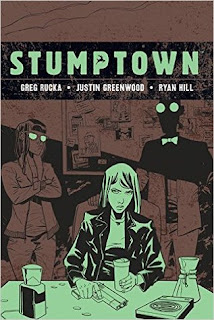 Today I finished Stumptown Vol 4 which is the 4th and so far, last edition of the Stumptown series.

Portland's best private investigator Dex Parios is back, and this time, the case is a real grind. When she picks up a simple assignment to escort a package of highly-prized coffee beans, Dex has no idea that she's stepping into the web of the Barista Mafia and eccentric billionaires with no compunction about using force to get the most coveted coffee around. And to top it all off, her sister is in town.

Join Eisner Award-winner Greg Rucka and series artist Justin Greenwood (The Fuse) for the The Case of a Cup of Joe, the fourth case in the critically-acclaimed Stumptown series. This oversized hardcover edition also collects a bonus silent issue, as well as extra material such as issue covers, process pieces, and creator commentary.

This story, like the last, was drawn by Justin Greenwood. Greenwood took over from Mathew Southworth, who did the artwork for the first two of the series.

This story introduces Dex's sister, Fuji. It's no surprise that they don't get along. Dex may be flawed, but her sister is more so. I love Dex's character, but found Fuji rather unlikable.

Once again the story is a fast paced tale, told well by Rucka and again, I enjoyed Greenwoods artwork. A bonus story follows, listed as Chapter 5, but is a fresh tale. There is also a multi-paged interview with Rucka and Greenwood on how the story and art came together.

Hopefully, more of this series will follow.
Posted by Swordsman at 15:56