Beer of the Week - Andy's Stout 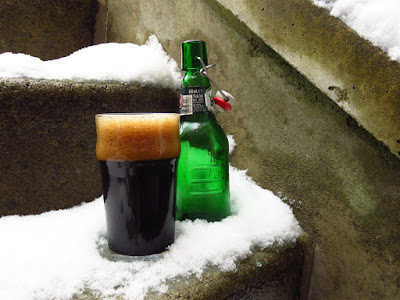 As I poured it, I could smell dark chocolate tones coming off my pour. The head was silky brown like a stout should be until I tipped the glass upright too quickly and lost that creamy head. As for the beer itself, it was either a deep deep brown or black.

Andy's Stout is full of rich tasting dark chocolate flavour. Normally I will notice some coffee tones in a stout but not here in this one and really not missed. There is a nice little bitterness that comes in through the finish.

It's a wonderful tasting beer, one that I would be only able couple of pints of due to its richness.

I know that homebrewers will have some less than successful creations, that comes with the learning and experimentation process. I also know that I will only ever get to taste his successes, that is what I would do, but the two beers that Andy has given me shows me that he knows his stuff.

Not only am I looking to getting another from him in the future but when summer comes around, sitting on his or our patio and trying some different beers that I have cellaring and if he should bring a few of his own brews, they sure would be welcomed.

By the way, Andy, the bottle has been rinsed well and ready to return to you.