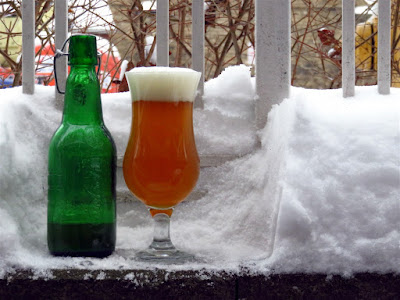 Last week Teena and I bumped into one of our neighbours, Niki. She mentioned that her husband, Andy, brews beer. He had been doing that for years.

I never knew that. And they never knew I have a great fondness for beer.

Niki sent Teena a Facebook message saying that Andy had a beer for me that would be ready on Friday. Last night I got that beer which Andy calls his Everyday IPA. He uses Grolsch bottles for his brews as they are easy to cap, with that special Grolsch flip top and are very strongly-made which is a necessity when dealing with carbonated liquids.

I'm not saying this because Andy is my neighbour and a nice guy but when I walked in the front door after taking pictures and having my first sip of his IPA, I exclaimed to Teena, "This is one friggin' delicious IPA!"

When I cracked back the Grolsch bottle cap, it jumped off with a loud pop. It poured light amber with what I can only call an orangy hue. As it is bottle conditioned (yeast left in to allow the ale to continue fermenting), there is yeast left in the bottom of the bottle so I poured very carefully.

The head was nice and frothy and quite meringue-like. The aroma that comes off is an interesting combination of a little pine and citrus. Although I sensed pine in the aroma, I did not taste it in this IPA. It starts with a nice citrus bitter bite which increases in intensity through the long finish.

Some citrusy IPAs are quite light in mouthfeel but this has a much heavier density to it. There's nothing wrong with that as I thoroughly enjoyed every sip.

Andy, I hope you have this recipe in a very safe place,as this is an IPA worth making again. Maybe you'll make an extra one for me!