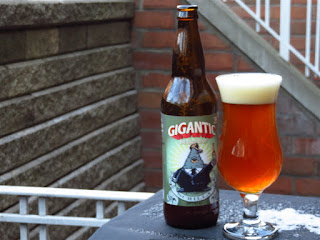 In my latest Canada Craft Club delivery, there was a 650 ml bottle of Scrilla Pale Ale from Gigantic Brewing in Portland, Oregon. The brewery opened in 2012 and makes a year-round IPA. The rest of the time, it appears they do one-offs.

One unique feature of the brewery is that Gigantic Brewing hires a different artist to do each beer label. The artist is given total control of the artwork. They are given the beer name and style and have the freedom from there to do whatever they want.

What is Scrilla? I didn't know either until I looked it up. It's slang for money. The label, done by artist Overton Loyd, looks very similar to a bank note. 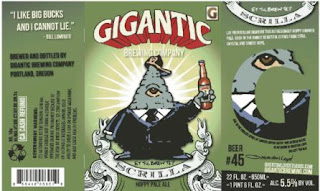 Scrilla pours amber with a slight orangy tinge, with a good white head. There are lots of lacings left behind as I sip. Citrus very prominent in the aroma.

The ale starts off a touch watery but then a very nice citrusy bitterness comes through. It's not an overpowering bitterness but quite nice. According to the bottle, the citrus is coming from citra, crystal and simcoe hops.

Scrilla is a very nice beer that I quite enjoyed.