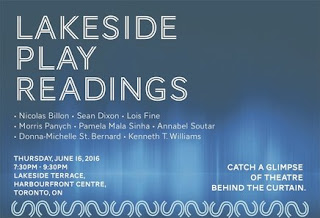 This weekend is the very first Canadian Writers Summit. I am attending tomorrow, and tonight they hosted what they called The Lakeside Readings. It sounded like a good idea so I was there.

Playwrights Guild of Canada, in partnerships with Coach House Books, Playwrights Canada Press, Talonbooks, and Scirocco Drama, presents eight readings by some of Canada’s most well known playwrights. Catch a glimpse of theatre behind the curtain as playwrights read their own words. Hors d'oeuvres and a cash bar are available.

David S Craig of the Playwrights Guild of Canada was the host for the evening.. 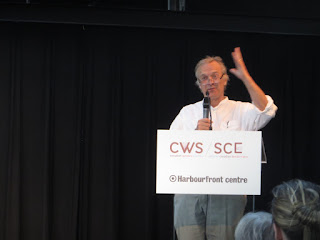 The first playwright was Nicolas Billon. He has written many works, had his play, The Elephant Song, turned into a movie, and won the 2013 Governor General's Award for Drama for Fault Lines. He read a monologue from his play, Greenland. After hearing the short reading, it's now a play I would love to see. 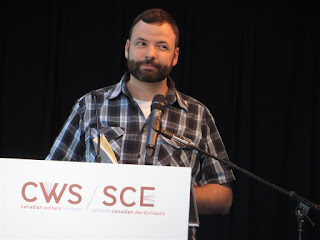 Next up was Lois Fine who had a long run with her play, Freda and Jem’s Best of the Week, which had a long run at Buddy in Bad Times Theater. She read from different parts of the play and in her short reading, I felt I already knew the main characters. 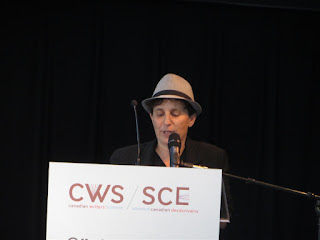 Kenneth T. Williams, a Cree playwright from Saskatoon, was up next.  He read from his play, Gordon Winter, which was so very powerful. This is a play that I think I would really enjoy. 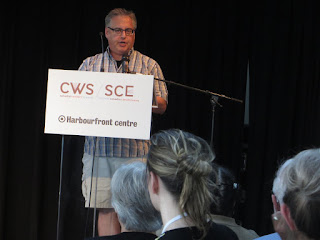 Kenneth was followed by Annabel Soutar. In 2012, Annabel was commissioned to write a new documentary play about fresh water for the 2015 Toronto Pan American/Para Pan American Games cultural program, Panamania. She came out with The Watershed, which premiered at the Berkeley Street Theatre during the games. She read from that play and did a great job. I wish I had gone and seen it when it was on. 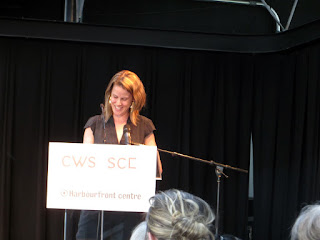 Pamela Mala Sinha was on after Annabel. In 2012, she won two Dora Awards  for best new play and leading actress for Crash. She read from that play tonight. It was powerful, not a play I would go see, but I would love to go see some other works of hers. 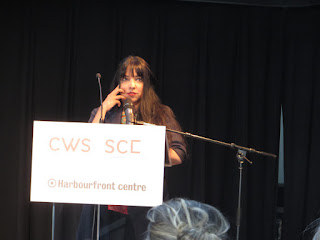 Donna-Michelle St. Bernard has many talents. She creates play, acts and is a lead vocalist in the folk/funk/hip hop trio ergo sum.She is determined to write a play about every African nation. Quite the task! Tonight she read from A Man A Fish and a play in development about Tunisia. I would love to see A Man A Fish. She was very entertaining. 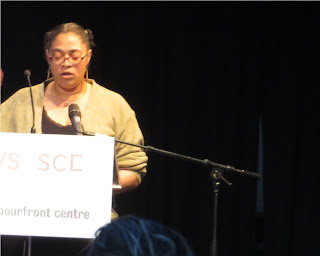 The last playwright was Morris Panych, who in his career has won four Dora awards and two Governor General’s awards for The Ends of the Earth (1994) and Girl in the Goldfish Bowl (2004). He was absolutely hilarious. He read from two works, one that has been done and another in production, I didn't get the name of the play that has been done.  It was a great way to finish the night. I was in tears and would go see anything of his in a second. 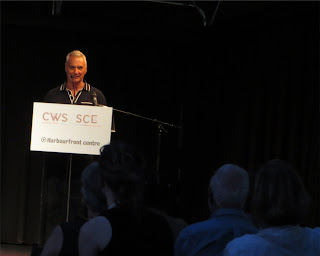 I have never been to a reading before, but next time I hear of one, I will want to go.
Posted by Swordsman at 23:31