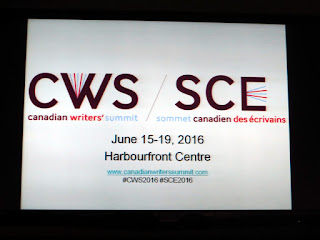 Today was the second day of the first annual Canadian Writers Summit, which is taking place at Harbourfront in Toronto this weekend. Over 800 people were in attendance. Last night I was at Lakeside Play Readings, which was an excellent way for me to start this summit.

I had a full slate of seminars ahead of me when I headed out. 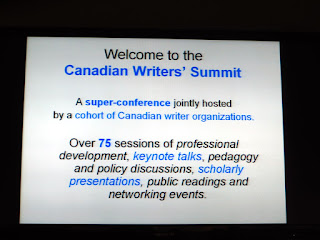 My first session at 9:30am was That Elusive Writing Grant — Not So Elusive Anymore?, which was hosted by Francis Farley-Chevrier with Simon Brault, Director and CEO of the Canada Council for the Arts, as the speaker. 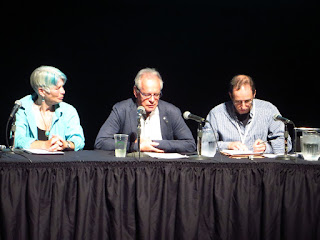 It was an interesting session explaining how the Trudeau government has increased funding for the Canadian Council, realizing how important the arts are to a nation. There was an overview of how the council works and how the new funds will be allocated. It was a bilingual session so we were issued translators. 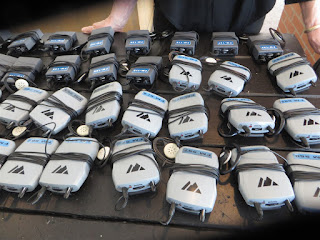 Next up at 10:30am, in the same theater, was Libraries, Lending, and Payments to Authors: Challenges and Opportunities for Public Lending Right Systems Around the World. It was hosted by Beatriz Hausner, who is a librarian with Toronto Public Libraries and Chair of the Public Lending Write Program (PLR) in Canada.

Beatriz explained how the the PLR currently works in Canada and will work in the future. After we heard how the programs were operated in Latin America by María Fernanda Mendoza, International Consultant and former General Manager, Mexican Center for the Protection and Promotion of Authors' Rights, Mette Møller, Secretary-General of the Norwegian Authors Union, James Parker, Coordinator, International PLR Network, Arjen Polman, Head of Stichting Leenricht, The Netherlands and Paul Whitney, former City Librarian for the Vancouver Public Library. 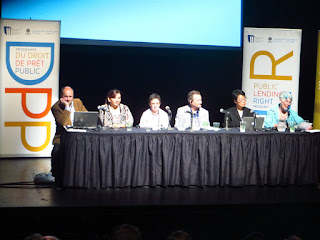 I didn't take a picture of my lunch as I was hungry and it was delicious. This was a terrific feat by the organizers, as usually dull bland meals are the order of the day when feeding hundreds. Attendees had their choice of vegetarian, tuna, beef or turkey. I had a turkey sandwich which was on marble bread with a tasty pasta salad and a desert, which I skipped (got to keep those pounds coming off).

My first after lunch session was First Page Challenge: Getting to Page Two (Adult Fiction).

First Page Challenge is a fun, interactive event where a panel of judges will share their on-the-spot expertise in a high-energy environment. Participants submit the first page of a novel or short story piece in the Adult Fiction category. These texts will be viewed anonymously on an overhead display while the judges give their impressions of strengths and weaknesses as it is being read aloud. This is a risk-free chance to see why editors put down manuscripts and why they read on, what agents look for in a potential client’s work, and what creative instructors really like. 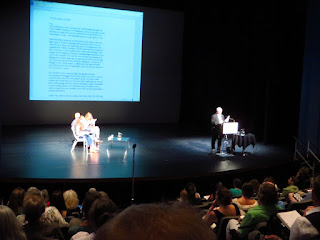 The moderator would read the first page of a submission that would be critiqued by three editors. Some minor points would be made but it was fascinating to see how moving entire paragraphs around could vastly improve a work. 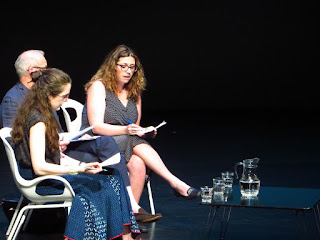 These tents were full of smaller seminars. It was a hot day but the shade of the tents and the cool breeze coming off the harbour made attending these very comfortable. 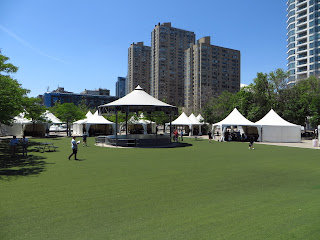 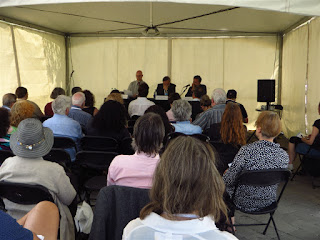 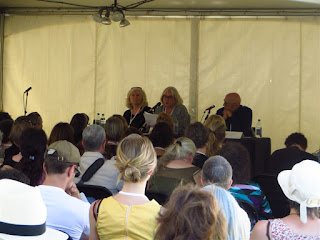 I enjoy science fiction and Robert J Sawyer is one of my favorite authors. Robert is one of only eight writers in history (and the only Canadian) to win all three of the science-fiction field's top honors for best novel of the year, the Hugo, the Nebula Award and the John W. Campbell Memorial Award.

Robert did a session on Diversifying Your Income.  He was introduced by Matthew Bin, past president of the Toronto chapter of the Canadian Authors Association. 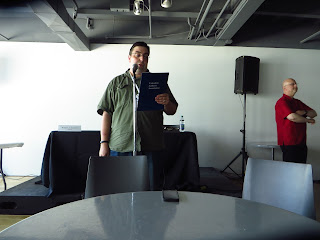 Robert spoke of how writers can make extra money by giving talks, being keynote speakers and writing articles for magazines and other publications. He also cautioned on how not to be underpaid for any of these services. He is quite successful in these endeavors, especially in the area of speaking.

He's not one to stand still and was continually on the move and is a fabulous speaker. If you ever have an opportunity to see him, go! 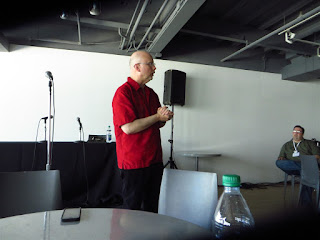 My final session after a long day was What You Know: The Pleasure and Pain of Research.

Internationally acclaimed authors Marina Endicott, Greg Hollingshead and Nino Ricci join moderator Alissa York to discuss the role research plays in their work and in their lives. Through their fictional creations, these writers have explored territories as diverse as London in the aftermath of the French Revolution, Galilee during the lifetime of Jesus, that other Wild West known as Vaudeville, and 17th Century Native North America. Find out why they’re drawn to stories that lead them far beyond the bounds of “what you know,” and by what method (and/or madness) they make those stories their own.

Again, this was quite interesting to learn how the did their research, how long it took them (you research until you hear their voices), the value of visiting the historic places they are writing about and the importance of speaking to experts in the field ("I don't like talking to people, which is why I'm a writer", brought lots of laughs). 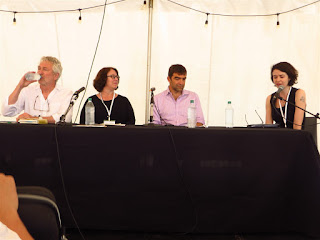 I had a fabulous day but some small criticisms. This is the first year and there will be some things to iron out for the next one.

One was that a session I wanted to attend, The Role of the Author in the Promotion of his/her Works, was entirely in French. If we were in Quebec I could see it but we are in Toronto. I used a translator for an earlier session and they were not available for this session.

The other would be the overlap of programs. Some would be an hour long and others an hour and fifteen minutes, which meant one had to choose whether they wanted to miss the end of one or the beginning of another. Also, kudos for all the sessions starting on time but when one ends at 2pm and the next one a person wants to attend  is in a different area and starts at 2pm, they are going to be late.

To solve this all programs should be an hour long with ten to fifteen minutes in between to get from one place to another, go to the bathroom or grab a water or coffee.

Still, all the volunteers were fabulous, everybody was very friendly, the programs well done and I came away with information overload.

I hope this proves to be a success and there is another again next year. I will surely attend.
Posted by Swordsman at 21:43