Beer of the Week - Birra Morena 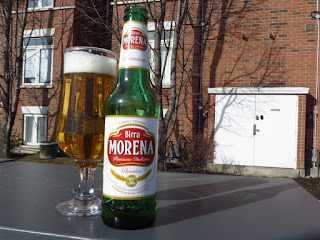 In my latest delivery from the Beer of the Month Club, there are four bottles of Birra Morena from Drive Beer Brewery that produces Morena Beer, located at the foot of a valley in Lucania, Italy.

There are pictures of the brewery on their website and the location is quite scenic. It's too bad I could not find one to copy into this post. For some reason, it was an Austrian prince, Windisgraetz, who built the original Italian brewery back in the 1980s. In 1999, the brewery was taken over by the Tarricone family.

Birra Morena is a 4.6% lager that according to the newsletter that came in the package pairs well with Havarti, Monterey Jack, salmon, trout and tuna.

Birra Morena pours a golden colour with a white head. The head takes its time to settle  There is grass in the aroma, which is not unusual for a lager. I have found Italian lagers to be sweeter than their European counterparts, which are much more bitter, and this lager follows the same trend. It is a little more sweet than I like throughout with a soft bitterness in the finish.

I'll have no problem in drinking the other three but is not a beer I would get again. Those who like a sweeter lager with toned down hops would enjoy this and should give it a try if you have the chance.

I have taken in London, very good. I like.Lisa