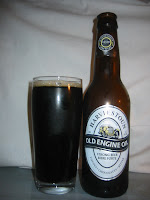 While gazing across the many choices for the Beer of the Week, I spotted Old Engine Oil by Harviestoun Brewery in Scotland. I had to give this a try despite its risky name.

This beer was created by Ken Brooker, who designed wooden prototypes for Ford Motor Company just outside of London. When he was transferred to Scotland, he could not find a beer he enjoyed. His boss at Ford Scotland was a home brewer which inspired Ken to take up the hobby.

When his friends gave him a 40th birthday present of a trip to Munich Germany for Oktoberfest, his company would not give him the time off work.

He tried a couple of different enterprises, a restaurant then a bakery, before buying a plot of land where sat a 200-year-old stone barn with 20 inch thick walls. It was just outside of Harviestoun Castle so he named the brewery Harviestoun Brewery. When he retired in 2006, he sold the business to Caledonian Brewery.

One of the beers he decided to produce was from the old recipe book he used as a home brewer. He found it very tasty but the "thick, gloppy" viscosity reminded Ken of, well, old engine oil. So that's what he decided to name it.

The label on this "strong beer" says that it is "Viscous, Chocolatey and Bitter" (spelled the same way it is on the bottle ... I do use spell check). It does pour thick and dark, with a good aroma and nice head. It is a very smooth tasting beer, one which I consider more a stout than a strong beer. It has a pleasant bitterness to it and finishes with a light chocolaty flavour.

I can see why it has won awards at the 2008 Great Taste Awards and a Bronze for bottled beer at the 2008 SIBA Scotland Regional Beer Competition .

Whether it is a "strong beer" or what the Beer Hunter calls a 'Winter Ale" or a stout, which I lean toward it being, it is one mighty fine tasty brew.

great review, I actually tried this beer at a pub in the UK. I always enjoy a nice thick beer.