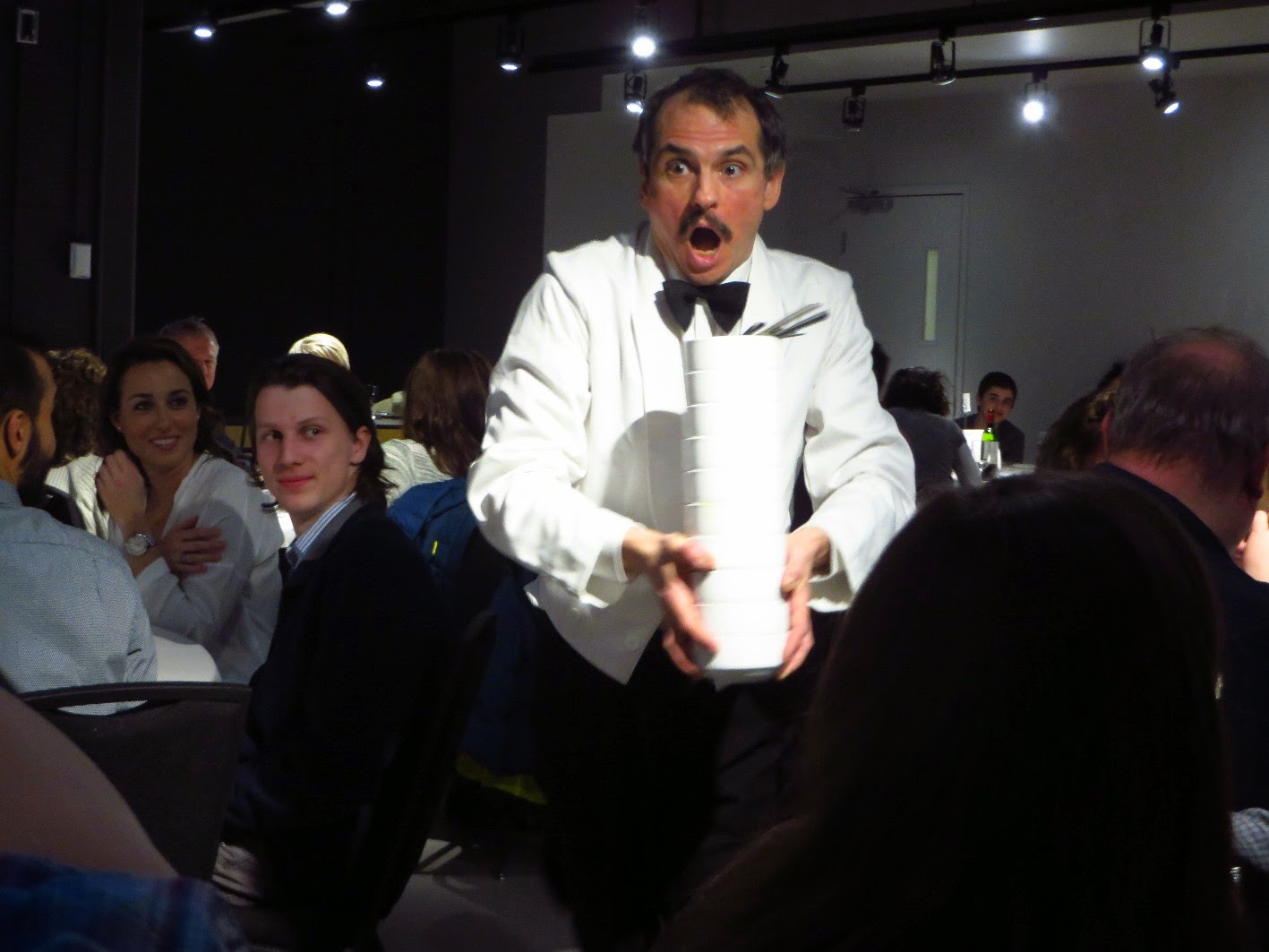 Tonight Teena and I went to the Sony Centre for Faulty Towers: The Dining Experience.

I was a huge fan of the show when it first came out.  In fact, even though I haven't seen it for a long while, I could probably still recite the lines as I watched the show. There were only 12 episodes made and now they are cult favorites and showed quite a lot during fund drives by U.S. public TV stations. 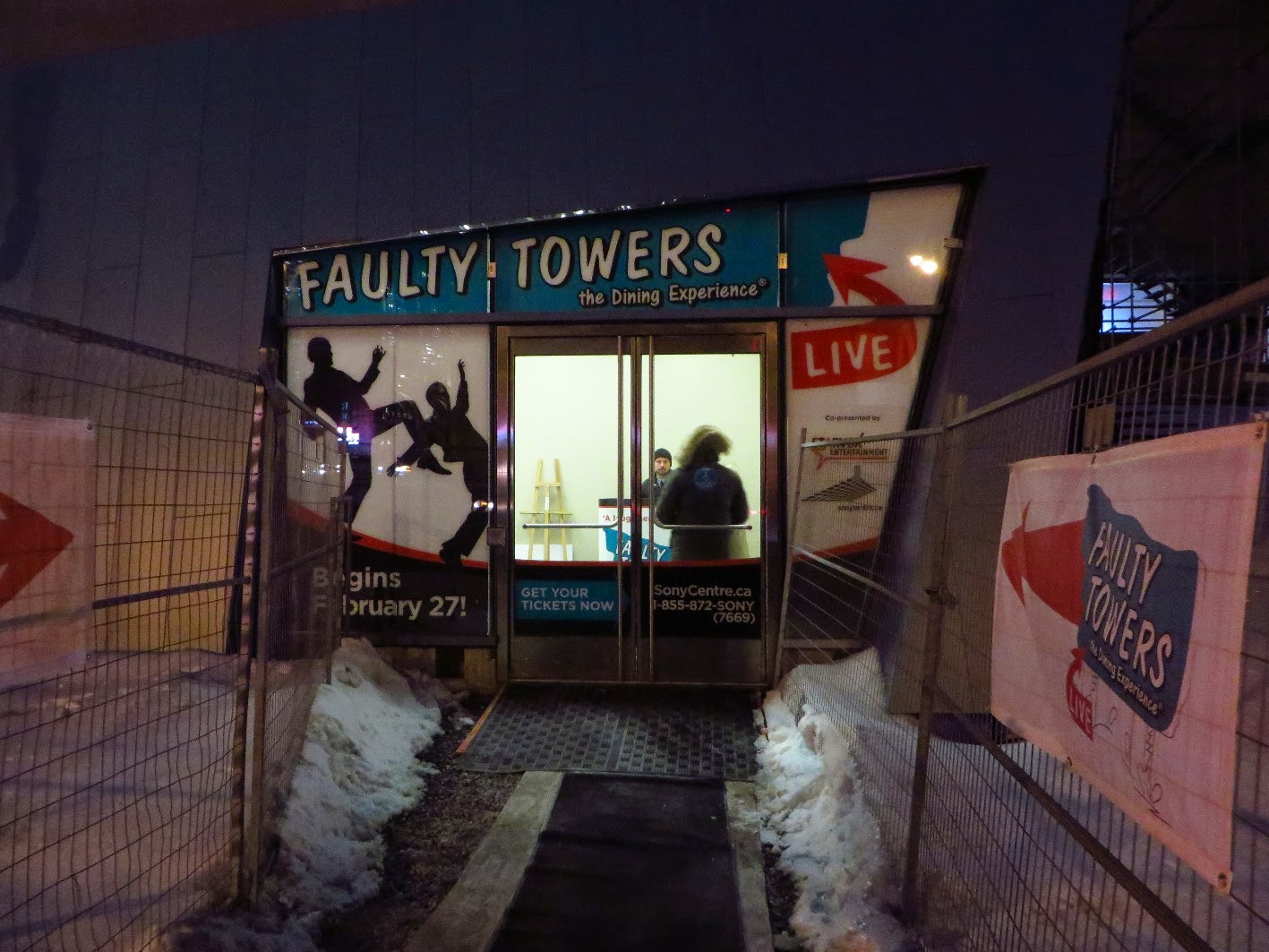 Faulty Towers The Dining Experience is an affectionate homage to Fawlty Towers the TV series written by John Cleese and Connie Booth.

With only a third of the show scripted, anything can happen as guests become diners in the ‘Fawlty Towers’ restaurant ... Waited upon by Basil, Sybil and Manuel!

Expect shambolic service, a '70's-style 3-course meal and "a rip-roaringly hilarious night out’ (This Is London) - just don't mention the war!

The show has toured England, Australia and Canada. I can see why it has done so well. I surely was not disappointed. Teena and I had a fabulous time. We bought VIP tickets for the show so were in a separate area with free appetizers and a free tee-shirt. 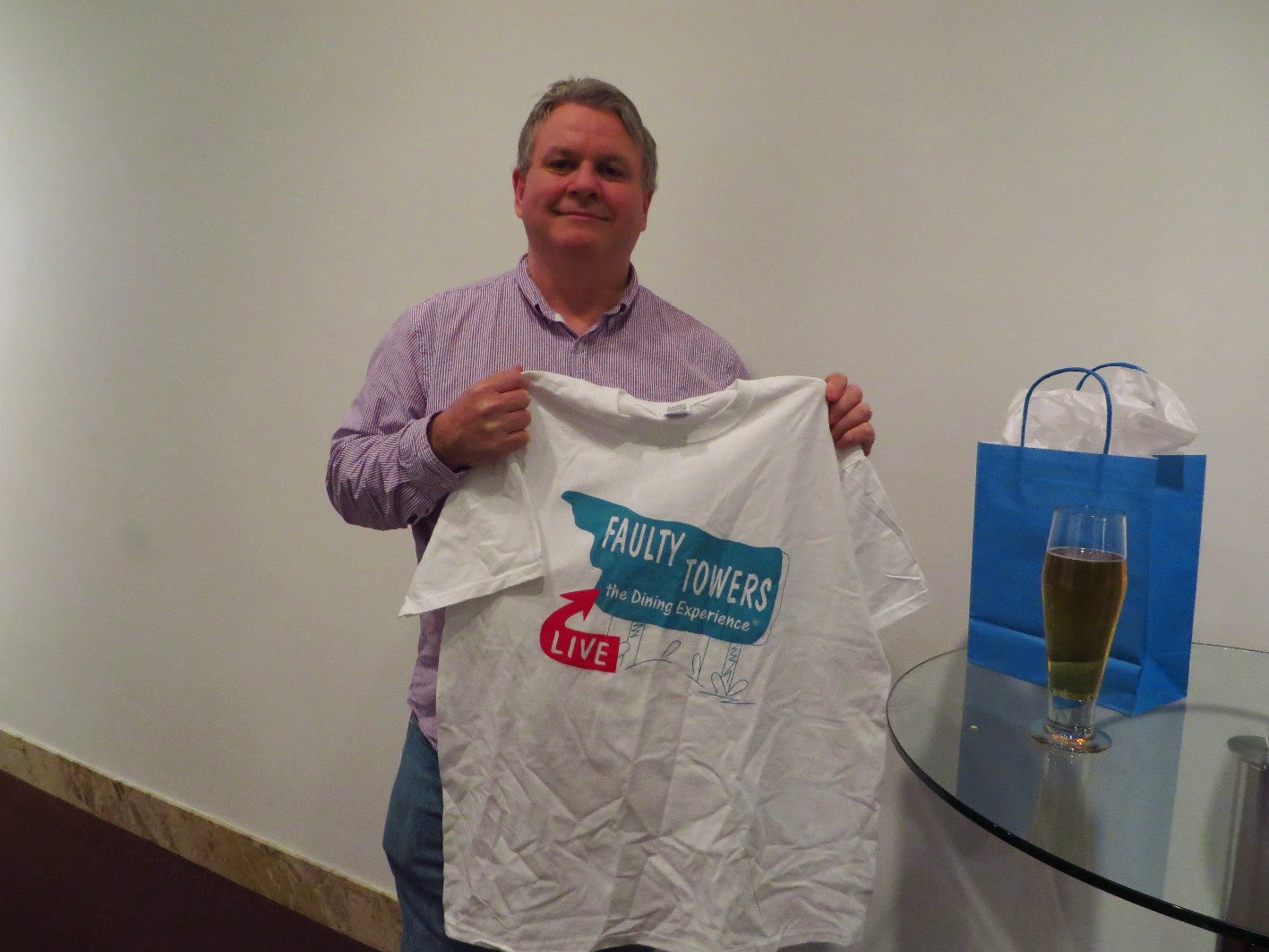 We also got to spend 15 minutes with the cast, always in character, of course. Upon entering, Basil attempts to explain VIP to Manuel. 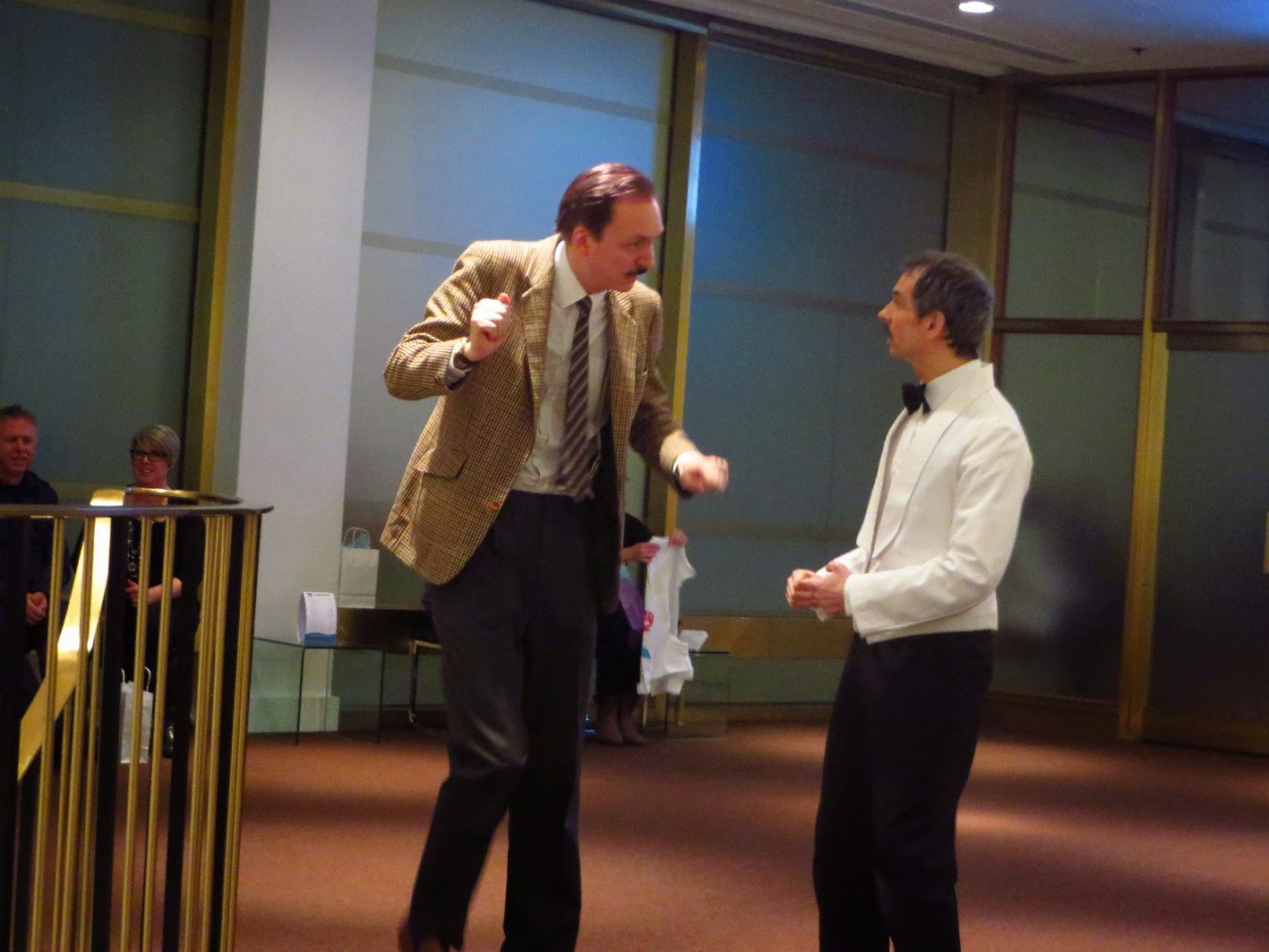 Teena took some pictures of the characters and I. As she was taking the picture of Basil Faulty (Benedict Holme) and I, Basil kept mumbling under his breath and cracked me right up. 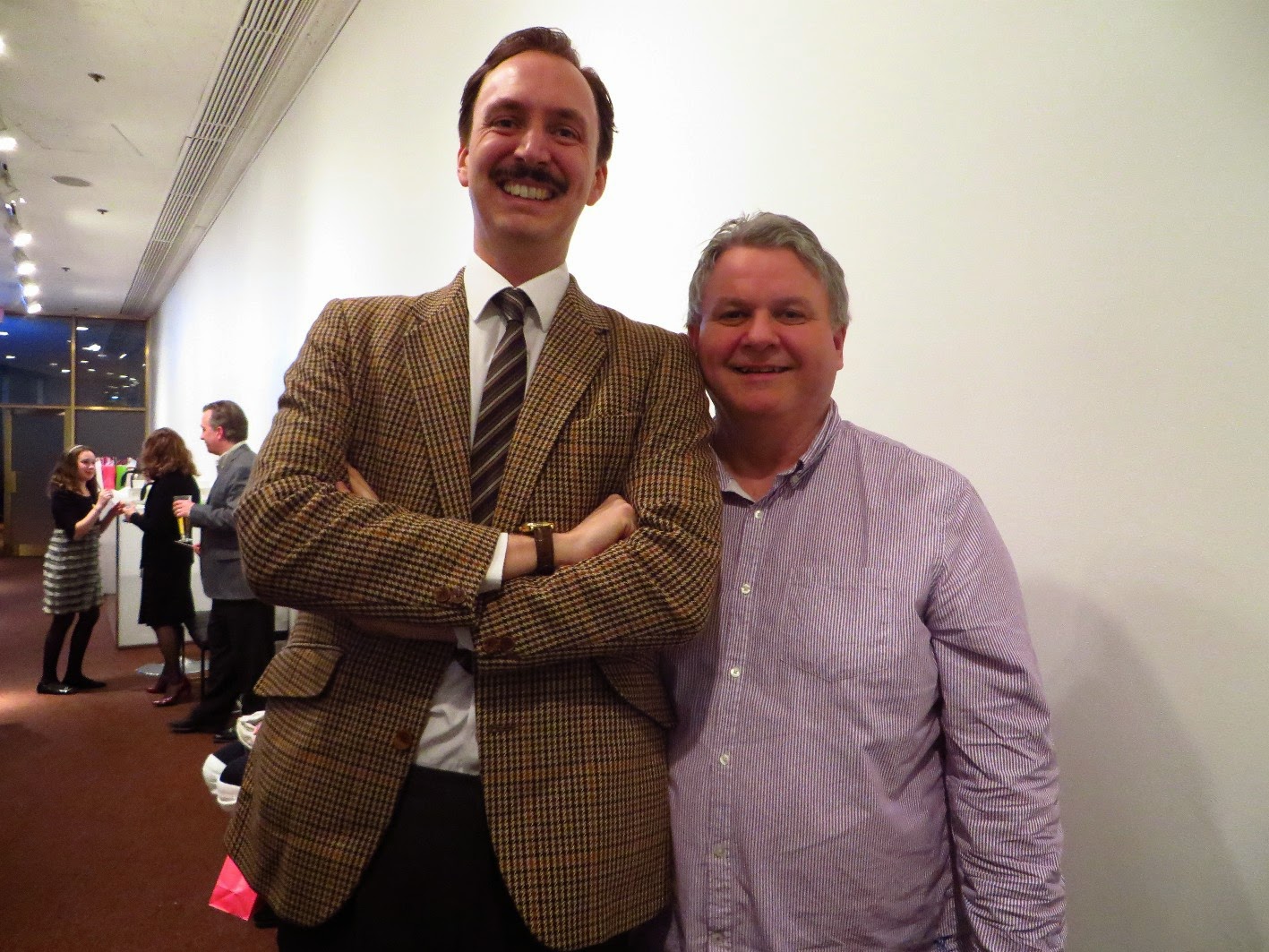 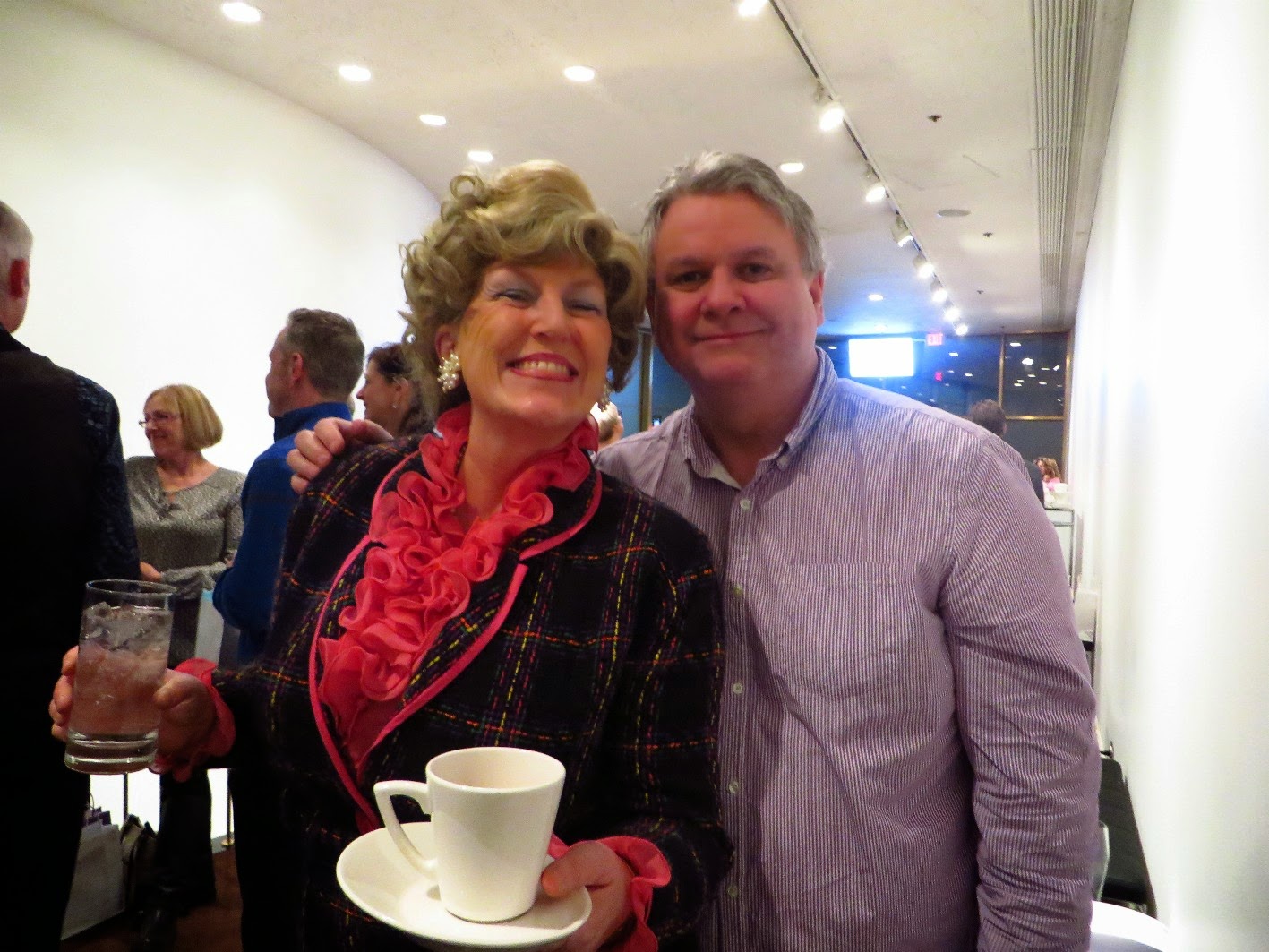 I thought all three had their characters down pat. Benedict Holme had every physical and vocal mannerism of Basil Fawlty down to a tee. Again, all three were terrific.

Basil and Manuel trying to open a bottle of wine 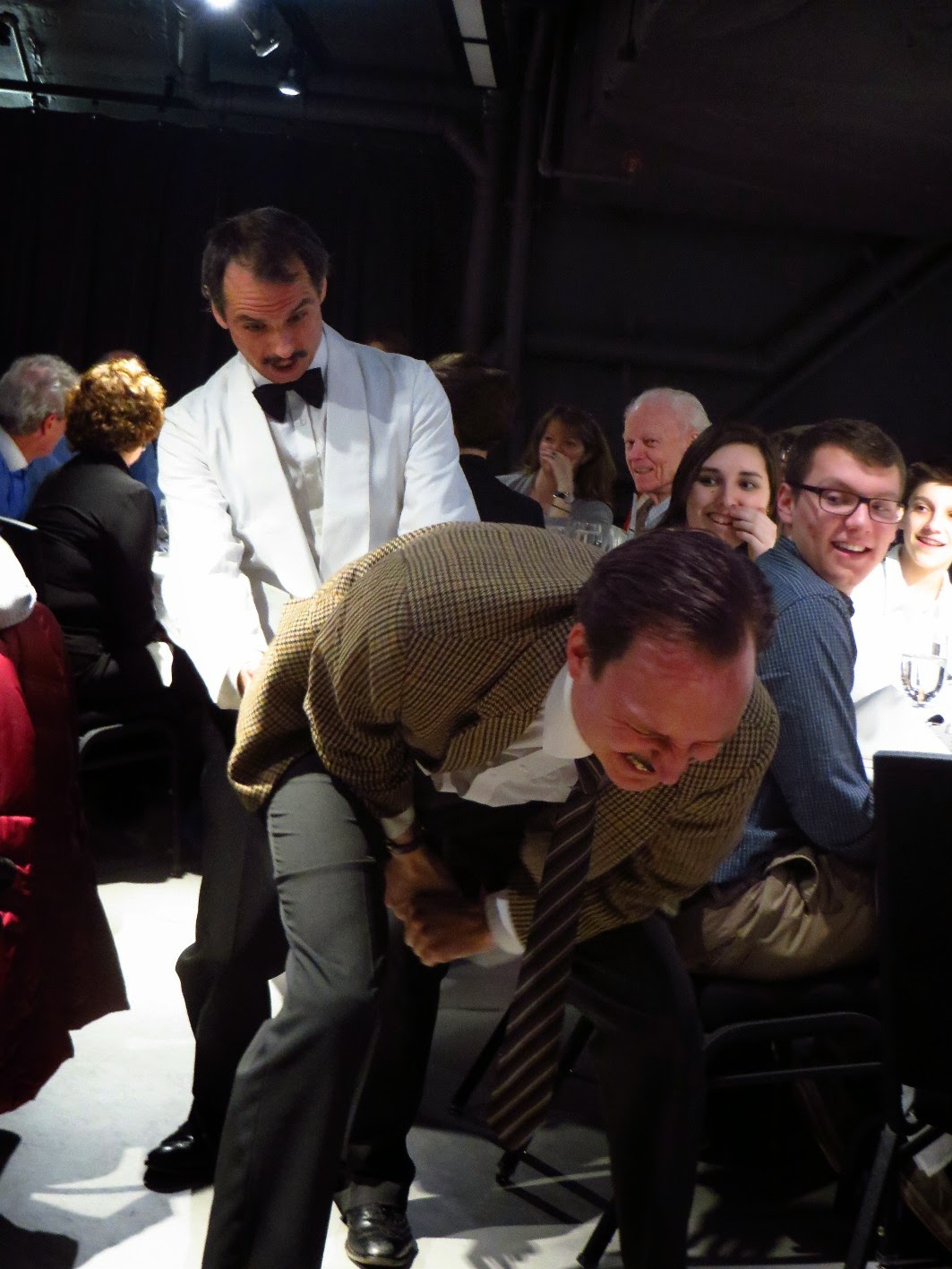 Our dinner. It was good. I came away full. 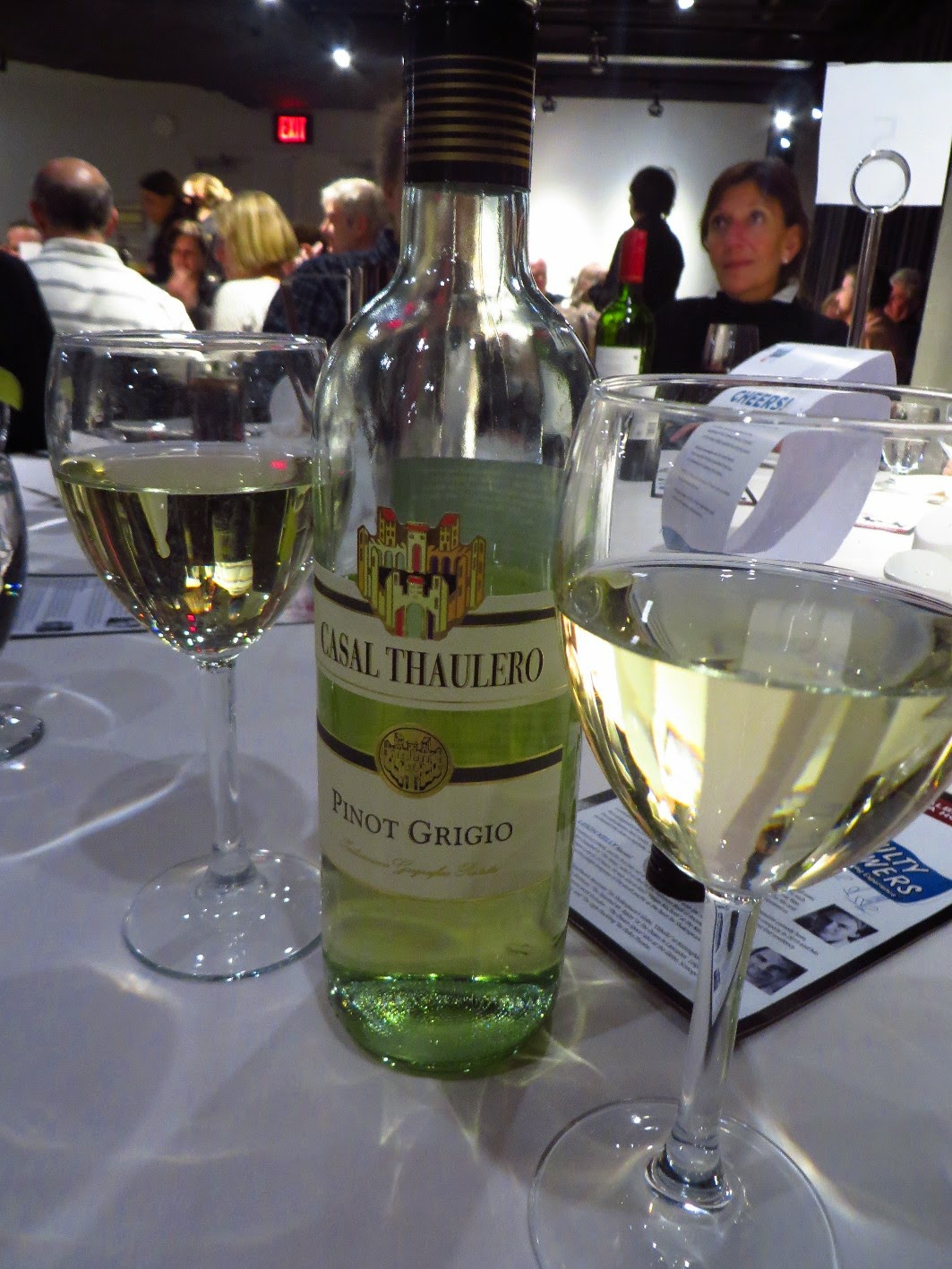 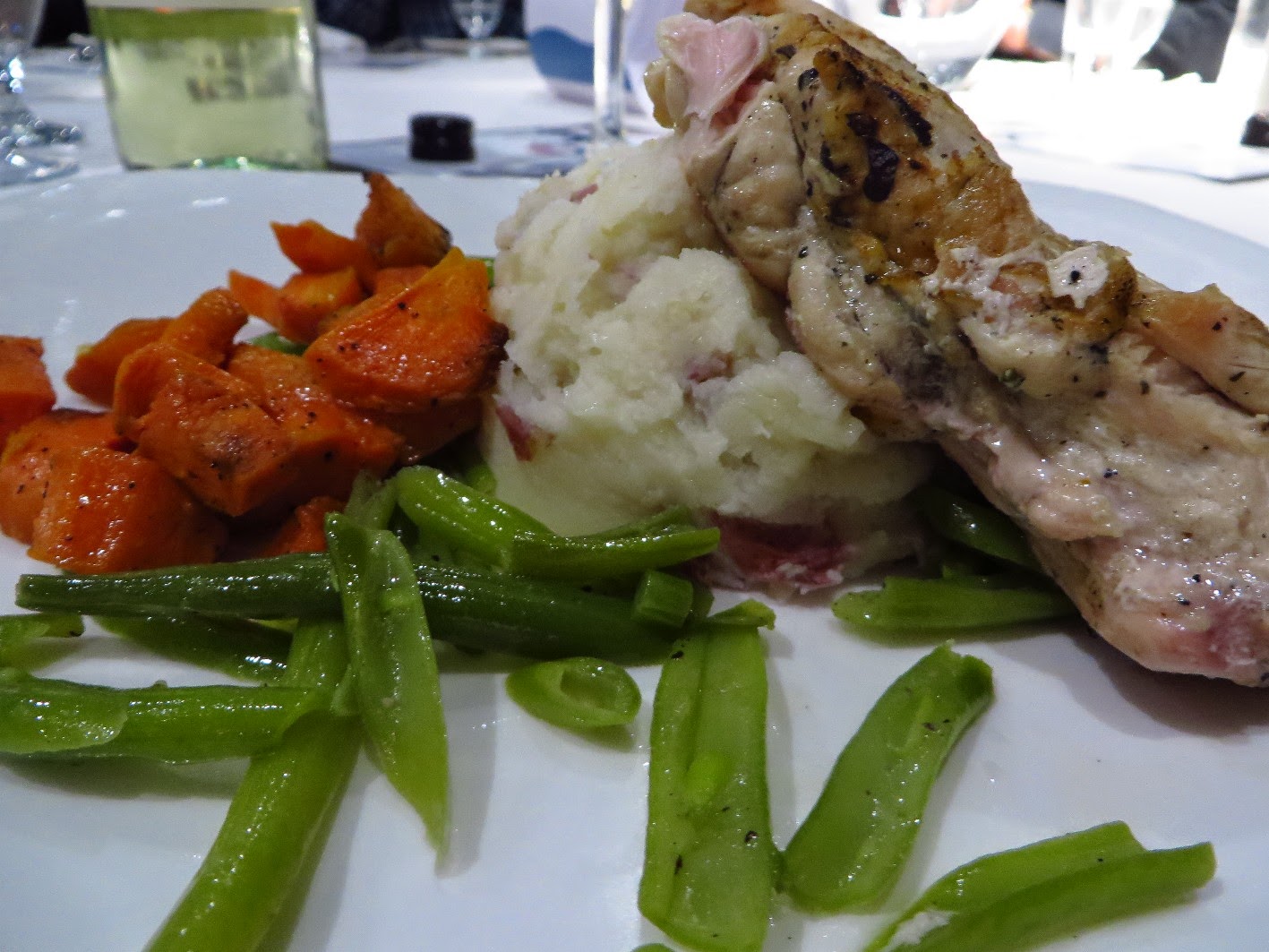 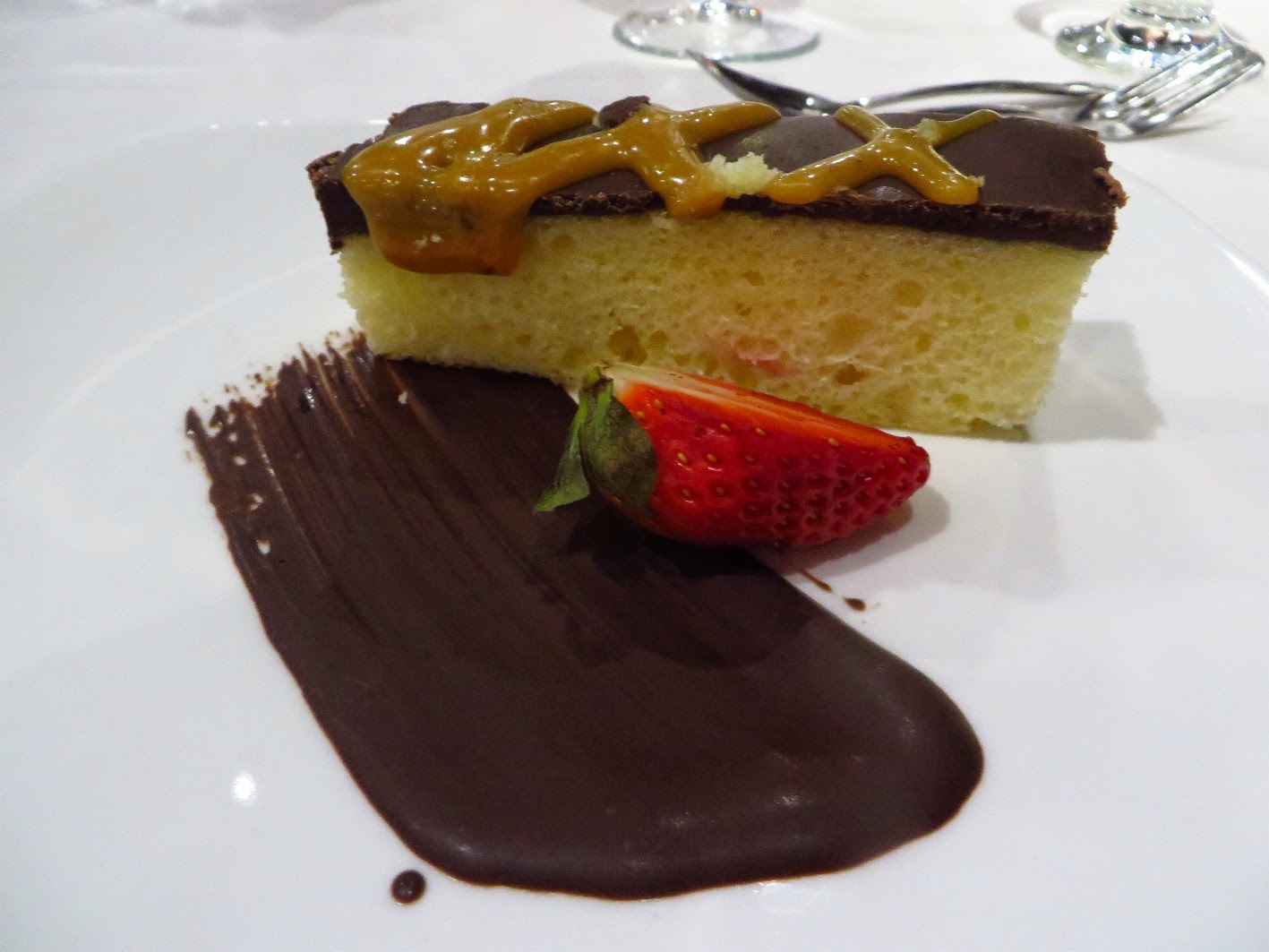 I didn't take a lot of pictures as I was too busy enjoying the show. We did receive typical Faulty Towers service, which I enjoyed. The cast touched on many of the classic bits of the original show, which was so much fun.

Manuel somehow ended up standing on one of the tables talking to the 140 who were there. 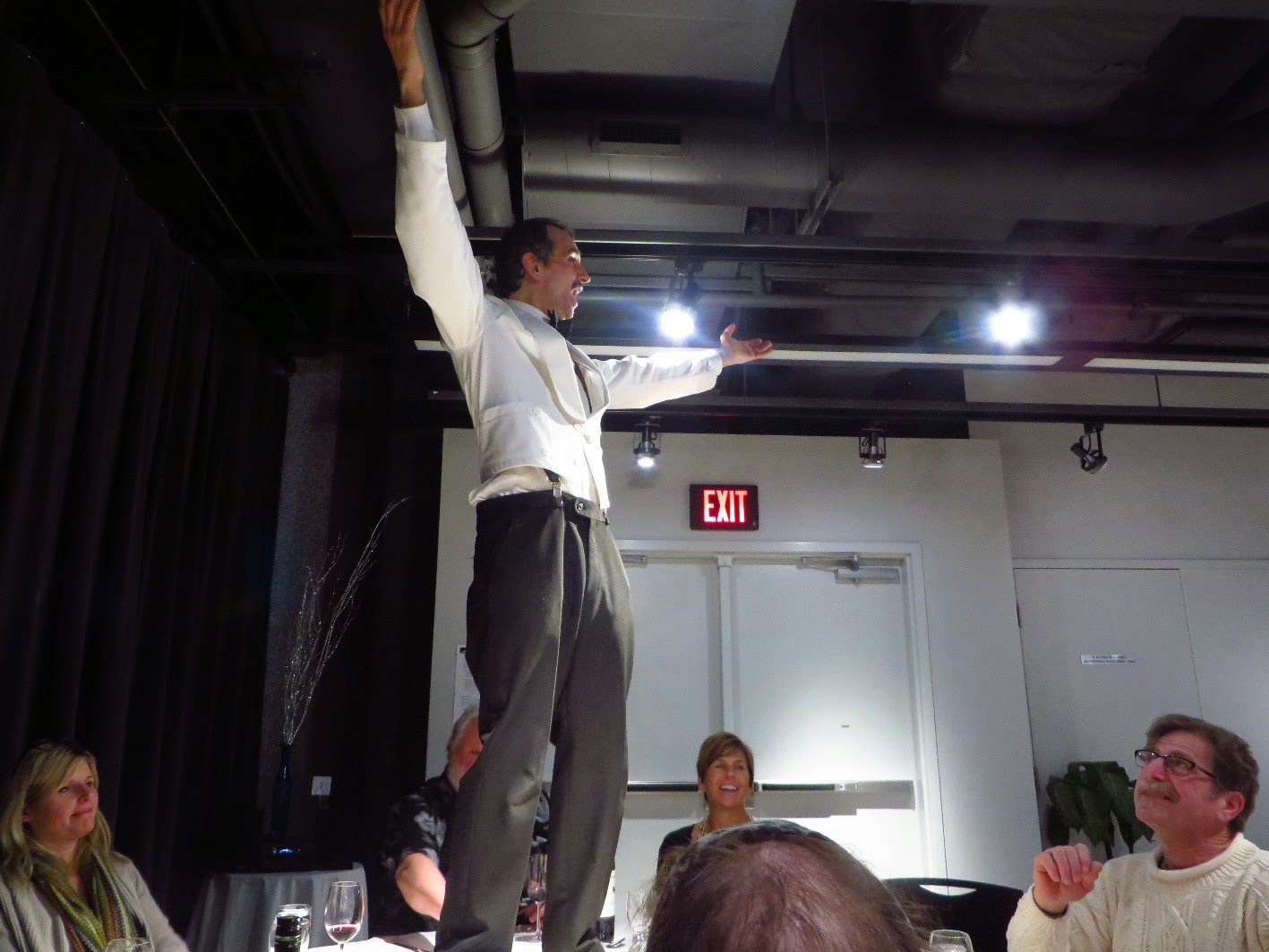 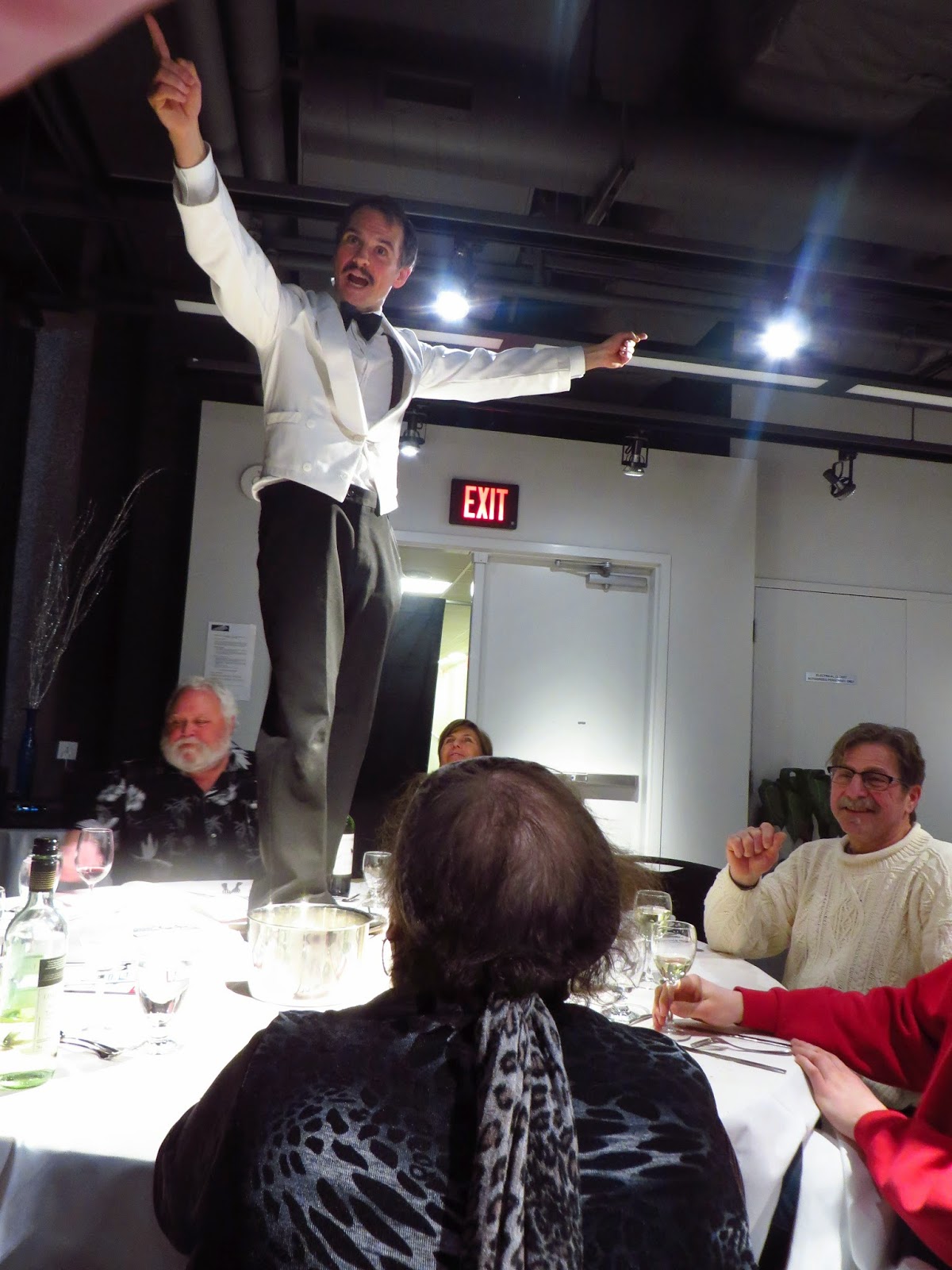 I didn't know what to expect going in, what the VIP tickets were all about, but came away knowing that it was money well spent. If you're a fan of the show, you have to go and take someone with you that knows little or nothing about the show.

Teena never really saw it and wants to watch it now.  And me, I'm always up for an episode or two, or the whole 6 hours in one go!
Posted by Swordsman at 22:00