Book Review - The Morning After, The 1995 Quebec Referendum 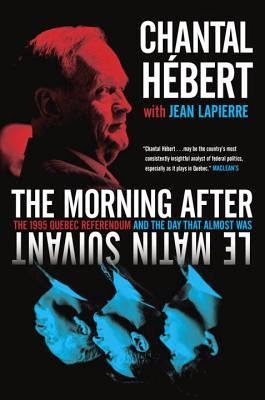 In 1995, Quebec citizens went to the polls to vote on whether the province should succeed from Canada. The question that Quebecers had to vote on was amazingly vague: Do you agree that Quebec should become sovereign after having made a formal offer to Canada for a new economic and political partnership within the scope of the bill respecting the future of Quebec and of the agreement signed on June 12, 1995.

I remember sitting at home and watching the results come in that night. Like many Canadians, my eyes were glued to the little red needle at the bottom of the TV screen, swinging just above and then just below the 50% line. In the end, 93% of eligible voters turned out and voted. At the end of the evening, by a very narrow 50.58% margin, Quebec voted to remain as a province of Canada.

The Morning After, the 1995 Quebec Referendum and the Day That Almost Was takes a look back at the campaign before the vote, the results, and what might have happened if the "Yes" side had of won a narrow victory but does this in a very different way from other books on the subject.

Only the most fearless of political journalists would dare to open the old wounds of the 1995 Quebec referendum, a still-murky episode in Canadian history that continues to defy our understanding. The referendum brought one of the world's most successful democracies to the brink of the unknown, and yet Quebecers' attitudes toward sovereignty continue to baffle the country's political class. Interviewing 17 key political leaders from the duelling referendum camps, Hébert and Lapierre begin with a simple premise: asking what were these political leaders' plans if the vote had gone the other way. Even 2 decades later, their answers may shock you. And in asking an unexpected question, these veteran political observers cleverly expose the fractures, tensions and fears that continue to shape Canada today.

Instead of just telling the story from start to finish, journalist Chantel Hebert and former politician Jean Lapierre spent a year interviewing all the major participants and lets them tell the story from their viewpoint, what they felt leading up to the vote, what the thought of the wording of the question, what they foresaw and how they would react had the "No side" had won.

The book is divided into 5 parts, The Yes Camp, The Quebec No Camp, The Feds, The Premiers, and The Last Word which is, of course, the interview with Jean Chretien. Each section devotes chapters exclusively to each person interviewed. The chapter on Roy Romanow, who was the Premier of Saskatchewan, was the most interesting and surprising. Had the "No side" won narrowly, depending on how negotiations with Quebec were handled, Romanaw was prepared to have Saskatchewan leave the Confederation!

I had never heard that one before. It was shocking.

Also unusual was a chapter at the end called In Lieu of an Index, Hebert, Lapierre and the Cast. Here the authors talk about their association with everyone interviewed in the book, from the time they first met or heard of them. I found it very frank and enlightening after reading about these major figures.

An excellent book that I would highly recommend!
Posted by Swordsman at 12:20