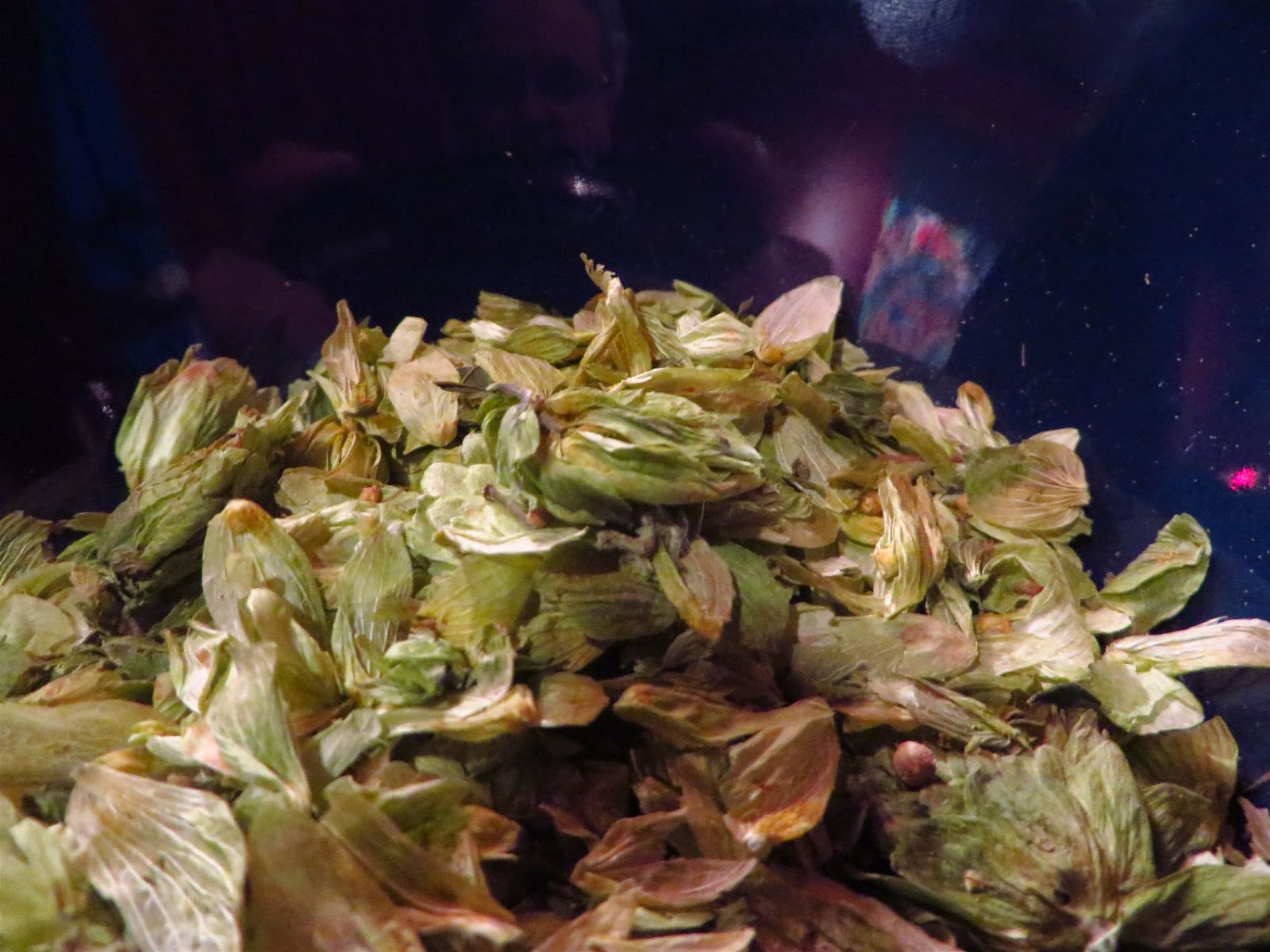 Discover the terroir of hops by rubbing and sniffing different varieties along with hoppy ales and IPAs. Smell hops from wet-leafy English flavours, to zingy white wine-like hops from New Zealand, alongside a guided tasting of beers containing those varietals. Learn about the mighty hop and why it remains the favourite bittering ingredient in beer. 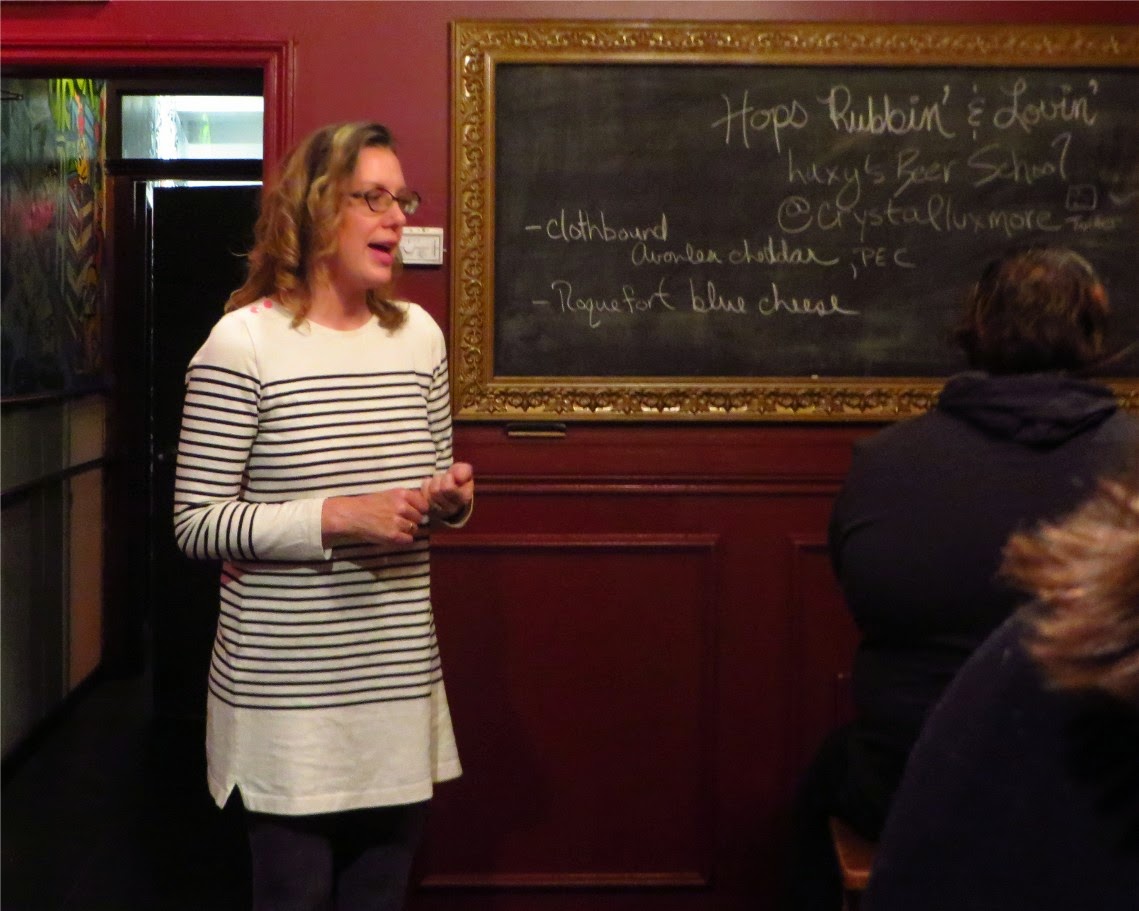 It's hard to know where to start. The hour and a half class went quickly and was fun and tasty. There were 19 in attendance. Nine were women.

For each tasting, the first item placed on the table was a glass of hops. First up was a Saaz hop which is used in Steam Whistle Pilsner. It is in the top picture and below. It is a mild hop, with a delicate aroma and flavour used in Pilsners so as not to overpower the beer with bitterness. It is one of the four noble hops which also include Tettnanger, Hallertauer and Mittelfrueh. They are low in bitterness and higher in aroma.

There are 200 to 300 variety of hops in the world and more are being developed on the vine. 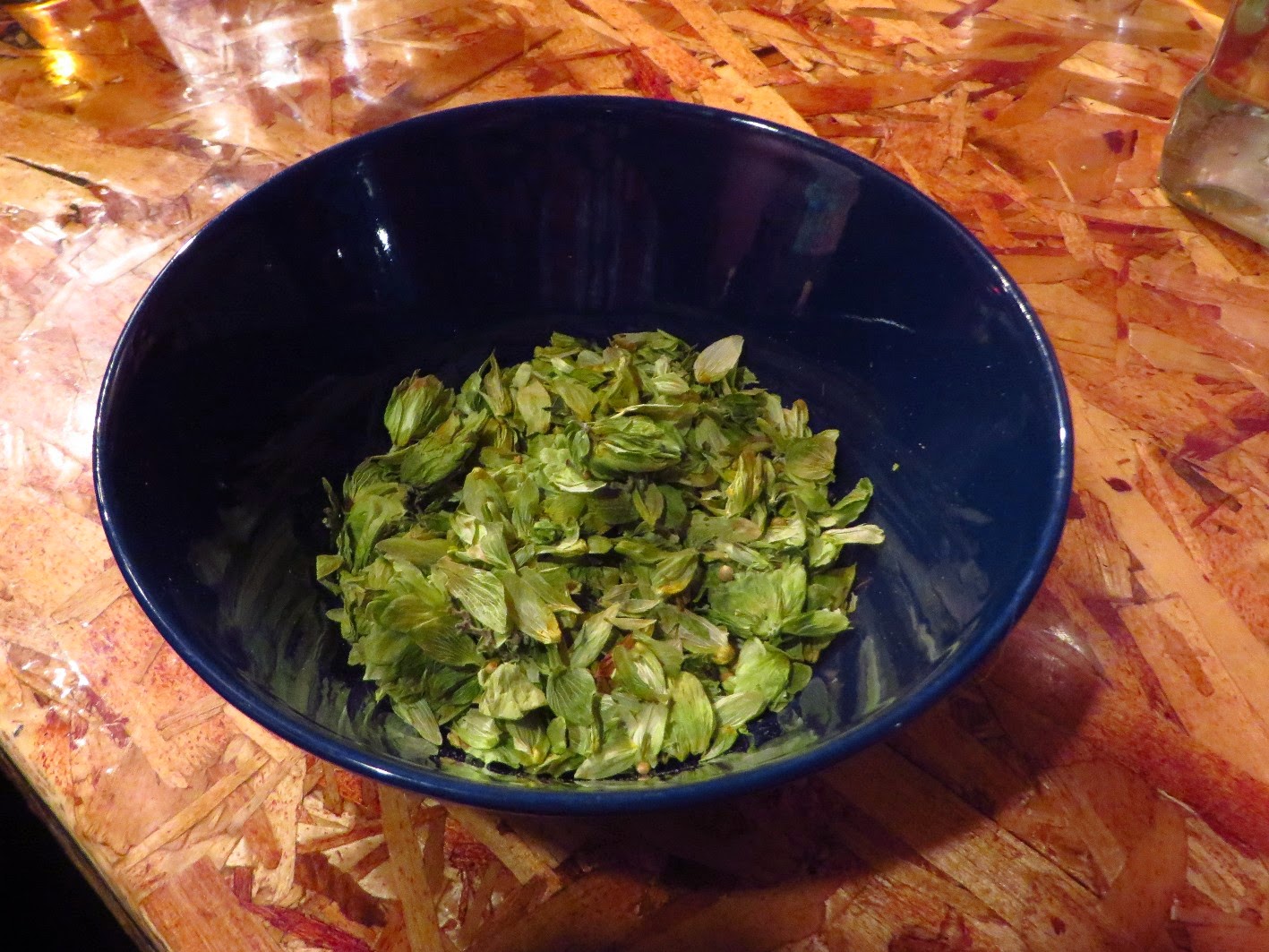 Of course, the next thing that came out was the beer. We rubbed the hops, took a sniff and them compared ito the aroma and taste of the beer.  It was an excellent way to showcase the hops used in each beer.

Hops are flowers but look like cones. I was surprised to find that only female hops are used for brewing as they are the ones with the lupulin glands that contain the essential oils that contain the flavour and bitterness qualities that are released into a beer.

See, I was paying attention.

Most brewers use hops that have been dried and compressed into pellets. These have more concentrated aromas and flavours and when crushed, turn into more of a dust. Below is the Wakatu hop pellet, which is a new style of hop that has been developed in New Zealand. New Zealand has such a isolated culture in which to grow hops no spraying is needed, so they are considered organic hops. The are woody, earthy, spicy and citrusy. I really enjoyed them and the Wakatu NZ Pale Ale from Junction Brewery, who uses this hop exclusively in their ale. 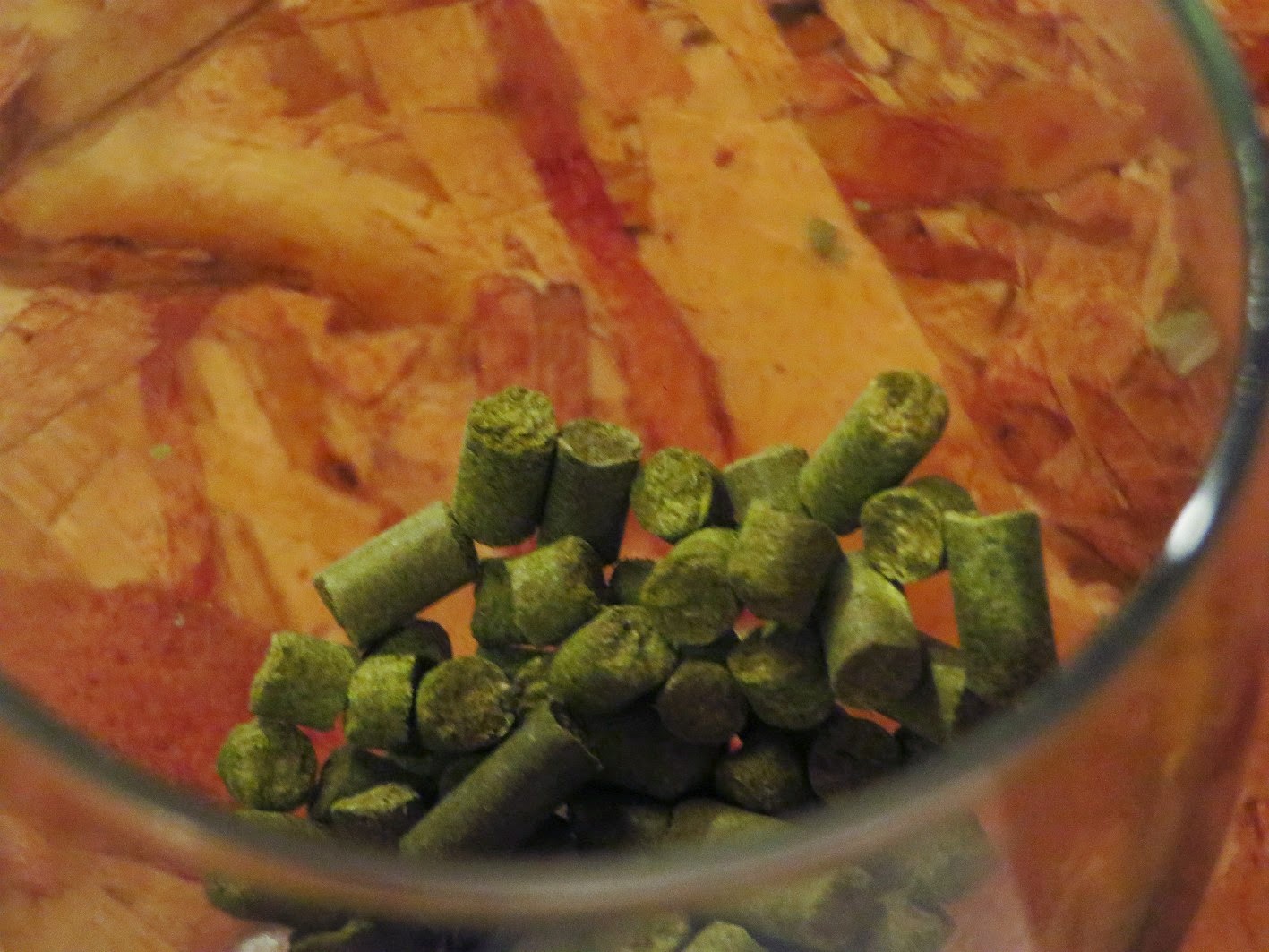 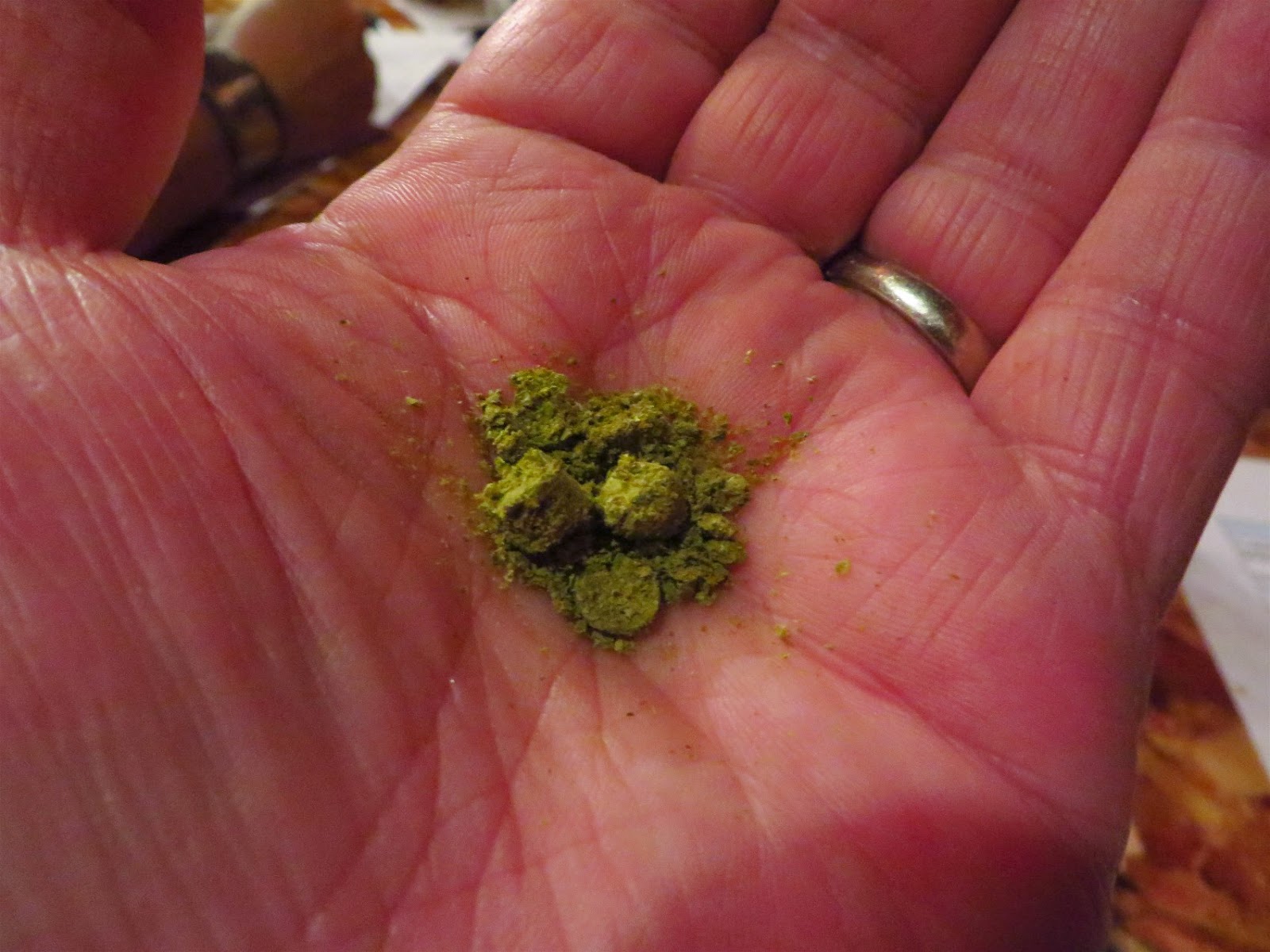 We had a cheese pairing with the Rhyme & Reason Pale Ale, which is more of an American style pale ale using Centennial, Chinook, and one of my favorite hops, the Citra hop, which has all kinds of citrus notes running through it. Crystal said this ale is finished with Simcoe hops that gives this a piny aroma and flavour. The Avonlea Cheddar match well with this beer but the Roche-fort Blue Cheese overpowered it. We were supposed to save it for another ale but I ate all mine. Oops! 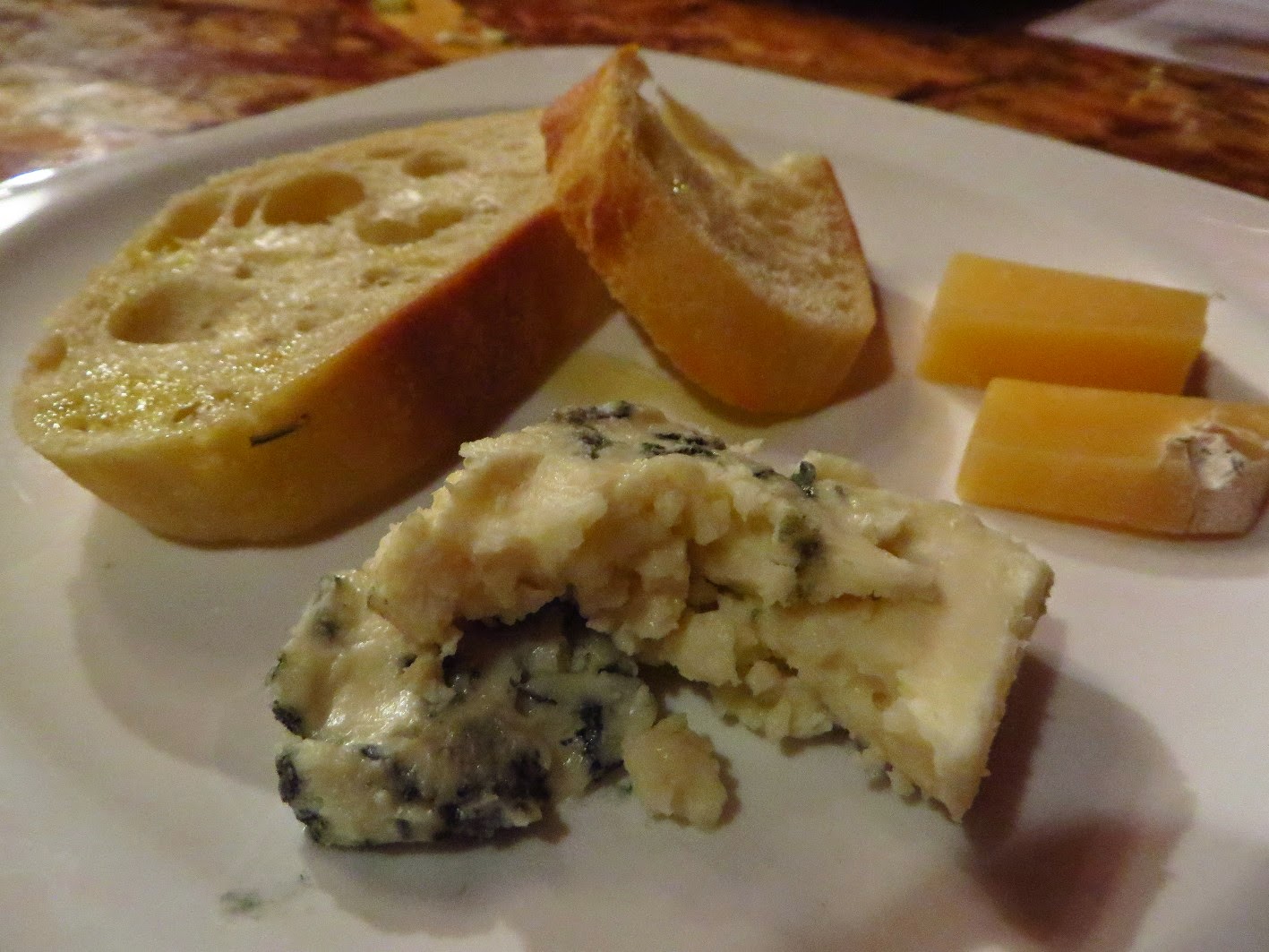 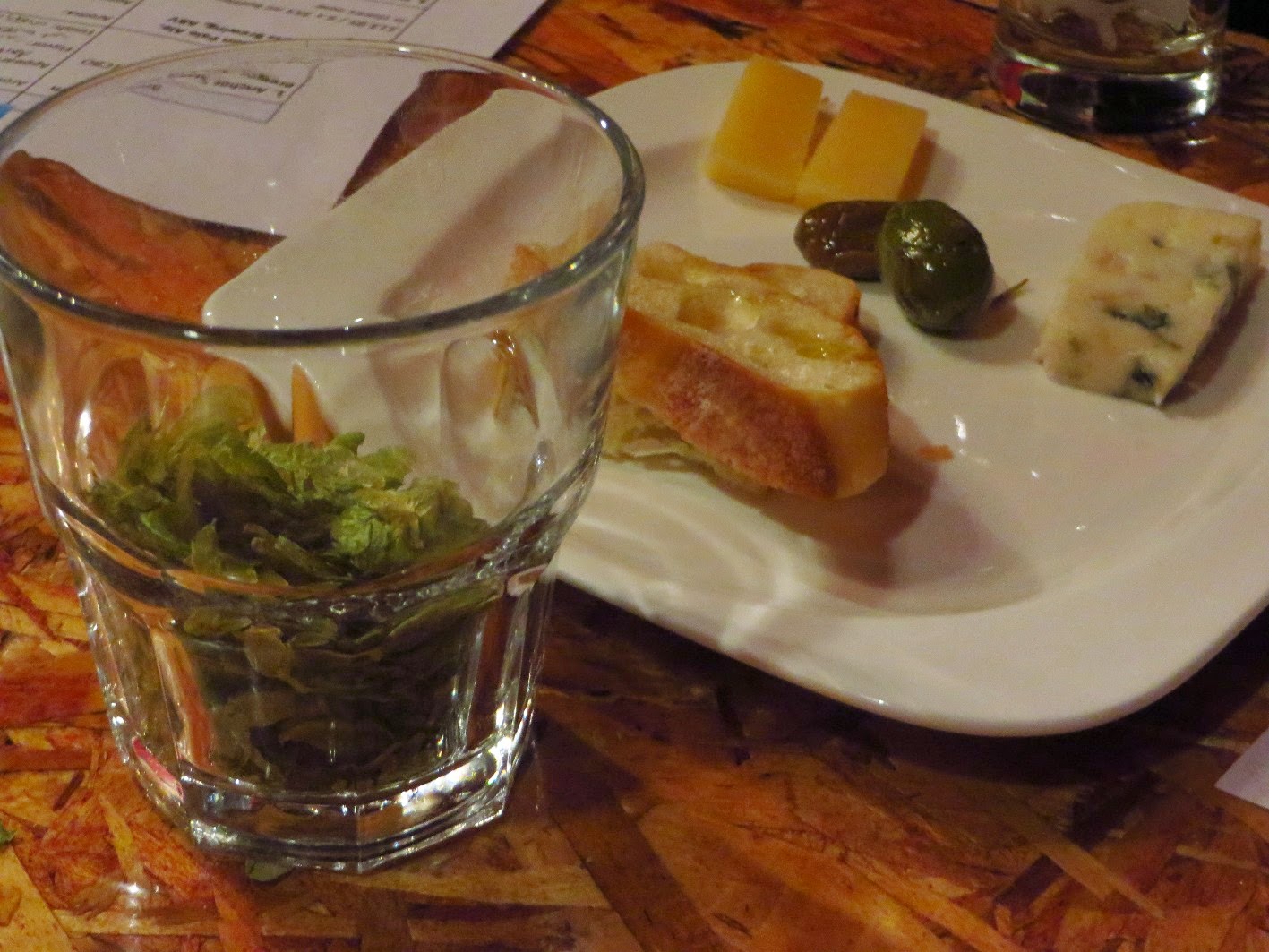 The blue cheese was supposed to be paired with a much stronger flavoured beer, St Ambroise IPA by Mcauslan Brewing in Quebec. We smelled Cascade and Centennial hops before having this. This IPA is coming to the LCBO in a couple of weeks and is an excellent example of a true English IPA. I really enjoyed it and will be getting some for my fridge.

Our last beer of the night was a half pint of Amsterdam Brewing Boneshaker IPA, a favorite of mine. With it came a bowl of Amarillo hops. They had a floral aroma which was slightly spicy, and citrusy. As this was a single hop beer, after smelling the hops, it was easy to pick up the notes in the aroma and flavour.

Surprisingly they were matched with a carrot cake muffing with a cream cheese icing. Apparently this is known as an excellent match and is one of Crystal's favorites. I was skeptical but she was right. They were homemade and very light in texture and yes, matched with the hop forward Boneshaker. 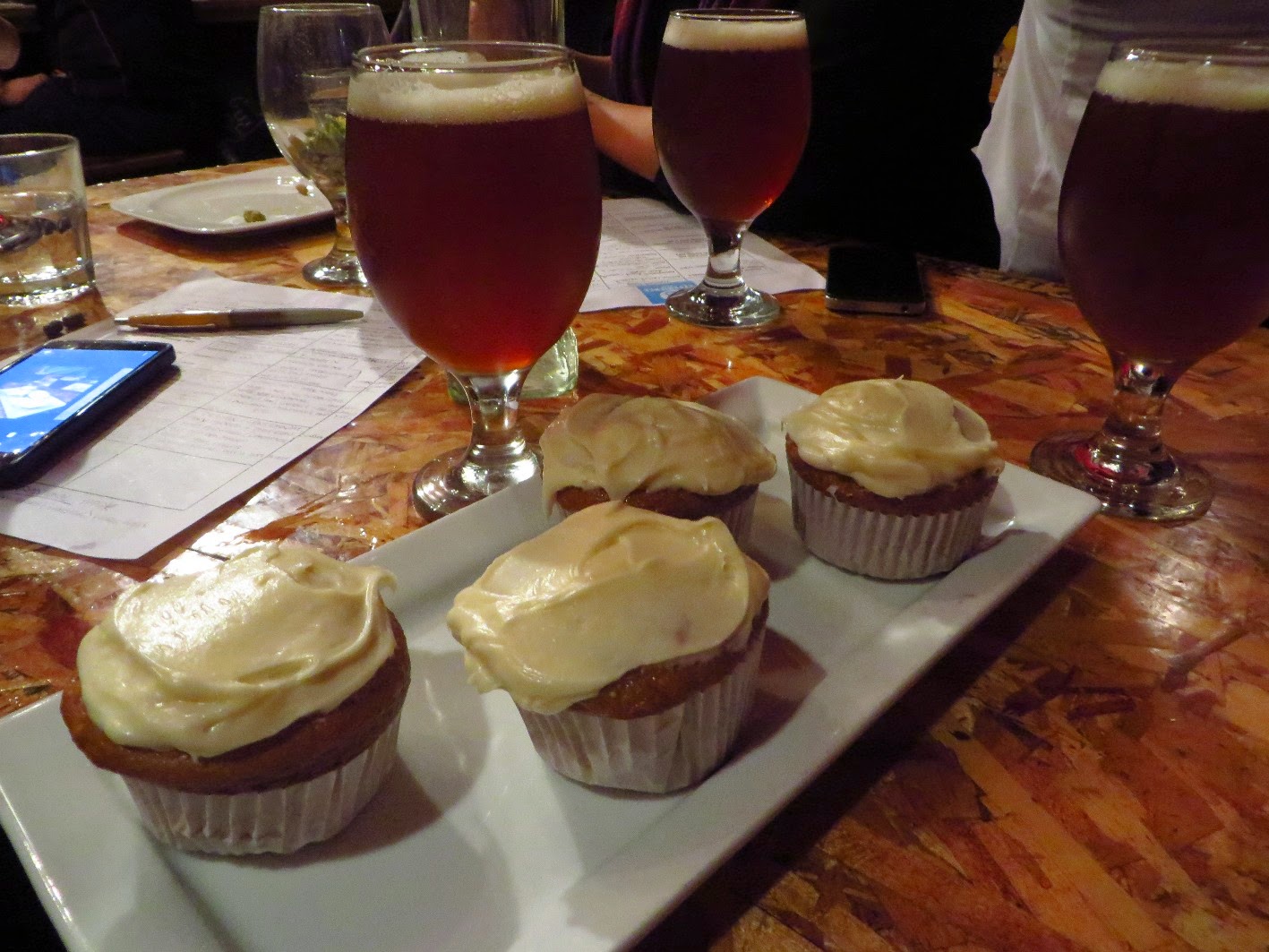 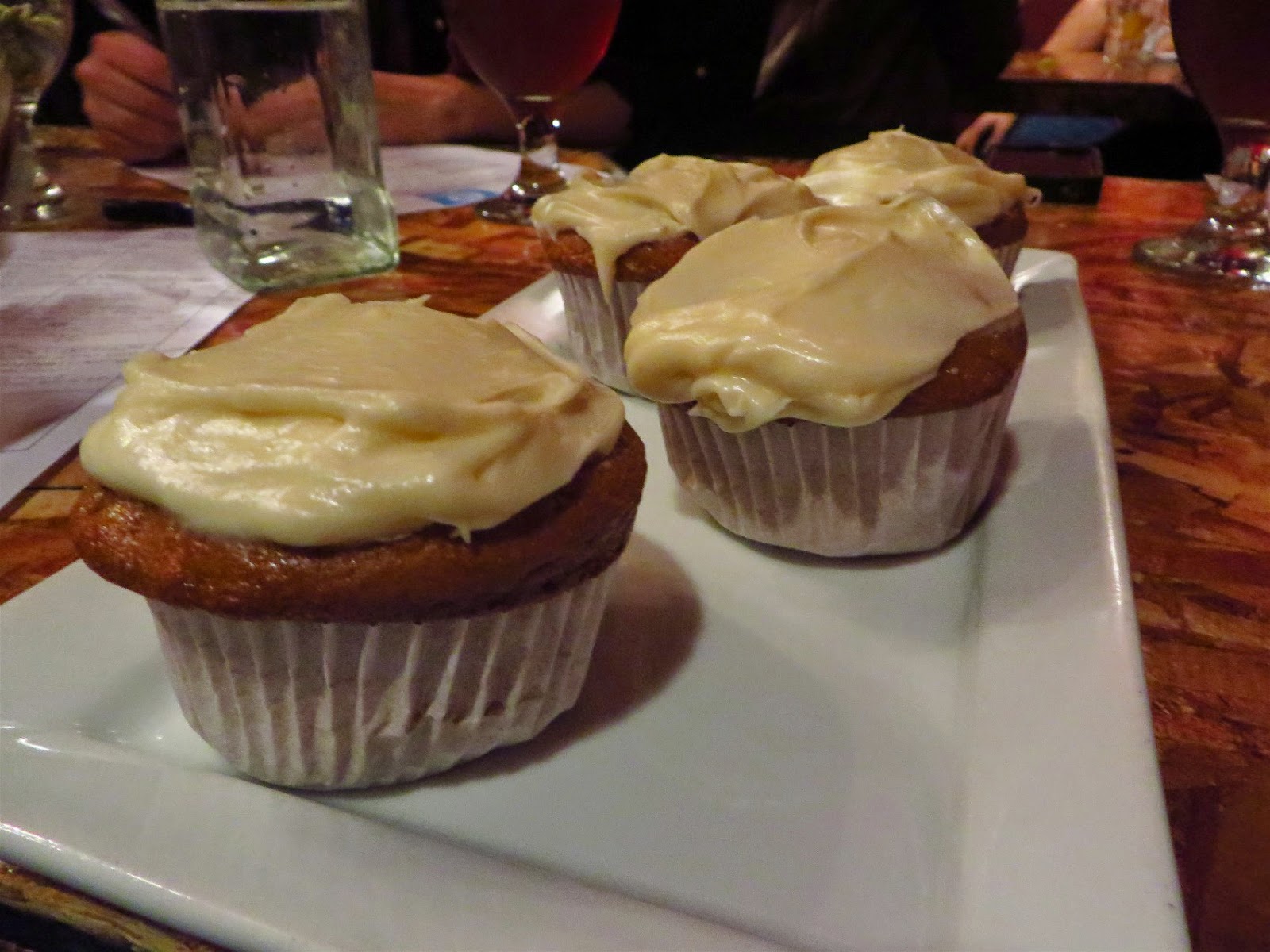 It was a great night. We crushed and smelled many different hops and tasted six great beers. This is the second time I have taken one of Crystal's beer courses and both have been great. I would not hesitate to do another again. She has three more coming up this fall. They are worth attending.

Back in 2010, Teena and I visited a hop farm in Stouffville. Here I am among the vines. I love hops! 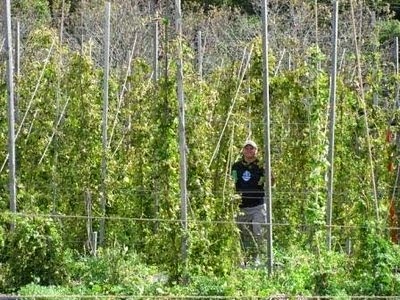 Thanks so much for coming to the class and for a great summary! One thing, I consider Rhyme & Reason an American Pale Ale, not English at all. And NZ hops for me are more tropical fruit/white wine forward but they are so varied, it's tough to pin them down! Cheers, C

You are right. I checked my notes again and the Rhyme and Reason was an American Pale Ale. I've updated the post