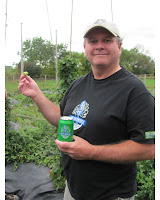 Hops are to beer, what grapes are to wine.

As part of Toronto Beer Week, Steam Whistle Brewery organized a bus trip to a hop farm just outside of Stoufville. The field is just under an acre, which Sandy grows with the help of friends to be used for research by Steam Whistle. Three types of hops are grown here but unfortunately I did not write down the names.

Sandy, the owner, was quite informative about the operation and the quality of hops. The real harvest was done in August so the hops we were seeing were second growth which would not be used. They are still very floral and quite aromatic. I was surprised that hops grew on vines. I had thought they were low growing plants. Sandy said they have to watch the growth as they can grow a foot and a half in a week, so need to be cut back so the nourishment of the soil go to the hop cones and not the growth of the vine.

I enjoyed wandering through the rows of vines, picking some of the cones which had 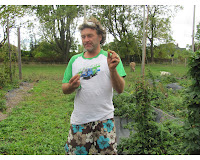 not yet browned, pulling them apart and rubbing them in my hands to release the intensity of the fragrance. It is a wonderful smell. Teena did get a little tired of me holding my hop-yellowed hand to her face exclaiming "Smell this!", which I did about every 5 minutes.

Sandy had recommended to crush a hop and drop it in our beer, something that the good folks at Steam Whistle supplied for us in good quantity. I did so and it did bitter the beer further but sometimes I would forget that I had done so and take a big swig which ended up with some hop pieces in my mouth. I then figured that Steam Whistle knows how to hop a beer, and did not try adding any further hops to my other beer.

It was 20 bucks for the day. I learned a lot, had a ball and would not mind heading up next August to help in the harvest.

Thanks, Sandy. Thanks, Steam Whistle! It was a fabulous day!

For Teena's take on the day and more pictures, click here. 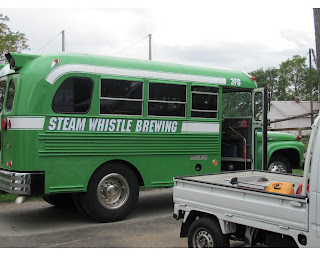 Sandy was an interesting and fun guide through his farm 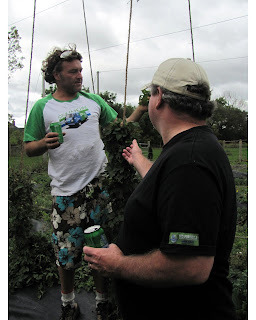 This gives some idea on how high hop vines grow 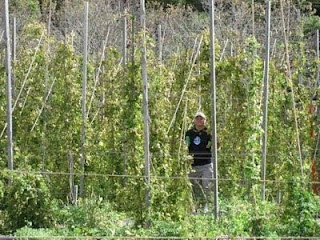 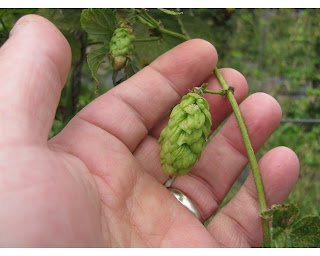 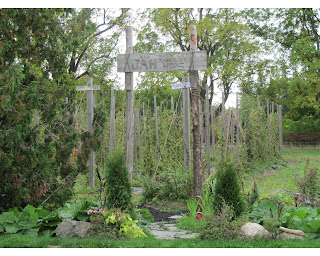 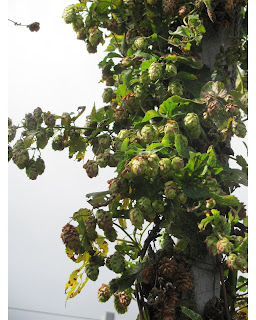 A close up of hops on the vine 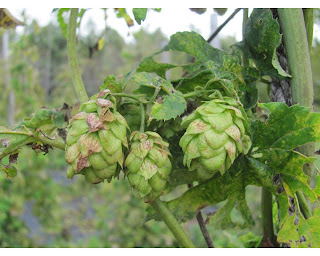